Changing his script to embrace the moments 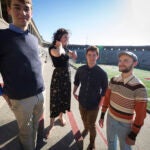 Casey Khang Moore is a master of one of the most elusive human struggles — living in the moment. He doesn’t linger on the past, or worry about the future. He’s comfortable with today and he makes the most of it, no matter what.

“That’s always been me: Go with the flow and whatever seems interesting or exciting at the time is what I want to be doing,” Moore said.

He isn’t sure if embracing spontaneity is part of his personality, or if he learned it along his life’s circuitous path.

Moore, 21, was born in Vietnam and adopted before his first birthday by a couple from Knoxville, Tenn. When he was 7, his life was upended by the unexpected death of his father, followed by his mother’s battle with depression and a debilitating accident that left her bedridden for nearly a year.

“I was too young to understand what all that meant. I was an only child and had to become independent really fast, taking care of my mom, as well as myself,” Moore said. “It was a touch-and-go thing, but it allowed freedom in a way.”

That freedom came from realizing year by year that he could rely on himself — to fill acting roles, civic leadership roles, and the role of a Harvard student.

Professor Stephen Mitchell, Robert S. and Ilse Friend Professor of Scandinavian and Folklore, traveled with Moore to Denmark last year for a Harvard Summer School course excavating a Viking Age Pit House, where they lived, worked, and explored together for two months.

Moore’s character is central to his adaptability. When he was 11, his mother picked him up from his Christian middle school and, on a whim, took him to an open audition. Within weeks he had an agent, and Moore and his mother packed up and headed to Los Angeles to pursue his acting career.

“Although my mom is disabled, she is really fun and adventurous,” Moore said. “We would be living in a new and big place for the first time, but moving to L.A. was a great opportunity for us to put the past behind us.”

It wasn’t as easy as they had hoped. They missed their family, and struggled with the cost of living, bouncing between apartments in their search for affordable housing. It was high school that provided the foundation Moore needed to build on his identity.

“I was in this big public school for the first time and my ninth-grade English teacher saw something in me I had never had the opportunity to express,” Moore said. “She bumped me to all advanced placement classes, where she thought I would be better fitted, and I was suddenly on the track of academia.”

Moore’s focus shifted from acting to academics, leading to civic leadership and redirecting his ambition. His freshman year he joined the California YMCA Youth & Government program, and eventually served on the board of directors.

“Youth & Government drove me to grow as a person and achieve academically,” Moore said. “I was surrounded by people who dreamed of going to Ivy League schools and it helped me realize, I can do that too.”

But it was not just politics that expanded his ideologies. Moore’s exposure to myriad viewpoints let his ethnicity surface — a complex issue for a young man who accepted his identity as an Asian-American without question.

“I never felt alienated, but eventually had to come to terms with what it means to have been raised in America, in an American culture, separate from my Asian culture but having Asian roots,” he said. “Harvard is a pretty diverse and spectacular place to think about these types of issues.”

In another serendipitous turn, Moore changed his focus from Government to Visual and Environmental Studies (VES). He recently completed a short film touching on issues of the Asian-American experience.

“I never did art before college, but it’s about doing whatever draws you in at the moment, because that’s how you learn, achieve, and grow,” Moore said.

Enticed by the course Archaeology of Harvard Yard, he discovered a love of archaeology, his secondary concentration. It led him to Mitchell, who Moore said is almost like a father to him.

“Steve led my study-abroad trip … and that experience affirmed that I don’t place a strong ideal on blood relations,” Moore said. “It’s more about connecting to the roots of my identity and where I come from, rather than who I come from.”

Moore also found a family with the Harvard Callbacks, where he forged another role with his talent for vocal percussion and beatboxing. He recalls being on a retreat with the group as freshman and waking up to people singing and cooking together in the kitchen — reinforcing his inclination to pay attention to what matters.

“The Callbacks is more than singing, it’s an amazing family support unit where people actually care about you,” he said. “Being part of the group now as an upperclassman and passing down some of the traditions has been really special.”

Traditions have taught him a lot and given him something interesting to think about, but … Back to the Moment: He intends to travel to Vietnam to explore his own history, and enjoyed a recent trip with his mother to Las Vegas.

“When I got to Harvard, I was pretty sure what I wanted to do,” Moore said. “But the fact my mom was willing to spontaneously uproot our lives in the first place probably rubbed off on me. Who knows, I might take a stab at being a professional poker player.”