Making ‘a case for the small’ 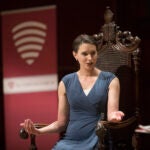 “I want to make a case for the small,” said Danielle Allen, James Bryant Conant University Professor and director of Harvard’s Edmond J. Safra Center for Ethics, for “the things that build a life of commitment.”

Giving the keynote address for the Hutchins Center Symposium on Martin Luther King Jr. at the Harvard Kennedy School on Friday, Allen began by noting that although the Civil Rights leader “painted on a canvas that feels big,” she and many of her colleagues find themselves advocating smaller-scale activism — and worrying that they are not making a difference.

Frequently citing King’s writings, Allen noted, “Through our scientific and technical genius, we’ve made of this world a neighborhood, and yet we’ve not had the ethical commitment to make it a brotherhood.”

In a talk that referred frequently to colleagues, many of whom were present and who had spoken earlier at the daylong symposium, Allen shared that she was not initially a fan of “the small,” preferring instead to focus on broad issues concerning domination, attacking the social and economic implications of racial injustice head-on.

However, in response to Harvard President Drew Faust’s entreaties, she had spent much of the last two years managing a task force on University inclusion and belonging. With data revealing that the population of African-American scholars in some Harvard programs had slipped, she confessed, “There came a certain point last fall where, in all honesty, I was pretty tired” of the effort.

But even though, she said, she worried that her energies were being frittered away on trivialities, she did find bright spots. For example, she found that the Office for Diversity Inclusion and Community Partnership at the Medical School was doing important work, “changing how students are experiencing the campus,” said Allen. She went on to credit that office’s dean, Joan Y. Reede.

That conversation gave Allen pause. “You might think working on something like inclusion and belonging at one of the most elite places in the world doesn’t really count as participating in the Civil Rights Movement,” she said. What she realized was that these smaller, seemingly discrete efforts are all part of a larger whole — that even work toward progress at a university like Harvard will have implications for society.

“What we are building here are halls of power,” she said. “And the halls of power are connected to the guns and the prison watch towers. It’s never just about us here at places like Harvard.”

The challenge she threw out to the Harvard community audience was simple: “How do you put together the opportunity and a context like this with the basic inequality that plagues our world?”

Paraphrasing Cornel West, professor of the practice of public philosophy at the Divinity School and the Faculty of Arts and Sciences, who was seated near her, she rephrased her challenge: “It’s a question of whether or not as a professional you stay a warrior or as a professional you become a conformer.”

The ways in which that challenge can be answered vary, and some methods can seem, if not small, then quixotic. As an example, Allen cited the work of Bryan Stevenson, M.P.P./J.D. ’85, a social activist and attorney who has long campaigned against bias in the courtroom. Stevenson, Allen noted, realized that the issue underlying the racism of some judges and juries was often simply rooted in ignorance. His answer has been to work to establish the Memorial to Peace and Justice in Montgomery, Ala., opening this month, which documents the more than 4,000 lynchings of black people in the South.

“What he was doing was establishing a foundation for the creation of the ethical commitment to brotherhood. It’s not just about policy, it’s also about the intellectual paradigms.”