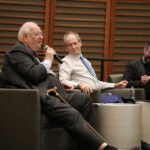 Is Boston racist? That’s the simplest version of the question discussed Monday at the Kennedy School by Khalil Gibran Muhammad, a professor of history, race, and public policy, and a group of Boston Globe spotlight team journalists whose December series examining race in Boston was a finalist for the Pulitzer Prize in local reporting.

But as the Globe team quickly noted, the report sought to reveal the complex reality behind that question — and the challenges that lie ahead.

The series of seven articles, gathered under the heading “Boston. Racism. Image. Reality,” uncovered uncomfortable truths underlying nearly all aspects of life in the greater metropolitan area, and compared Boston both with other cities and with its own past.

Boston is the whitest of the nation’s 10 largest metropolitan areas, the Globe reported. And while many Bostonians would like to think the city’s reputation is strictly a product of the ’70s busing era and its episodes of virulent racism, reality is more damning. The Seaport District, the city’s newest area of major development, has been built with more than $18 billion in public funds, yet it remains one of the whitest areas of the city, from its construction workers and contractors up through its business owners and new residents.

The Globe team of editor Patricia Wen, columnist Adrian Walker, and reporter Todd Wallack were invited to HKS by an anti-racism student coalition not only to elaborate on these findings, but also to discuss the impetus behind the series and explore its repercussions. Spotlight members Akilah Johnson and Nicole Dungca joined the 90-minute conversation.

The series, Wen explained, was prompted by comments in the national media. Comedian Michael Che’s crack about the Super Bowl, in which he referred to Boston as the “most racist city in America,” was only the latest.

“We weren’t sure if it was image or reality,” said Wen. “Is it just an image problem, with busing so calcified in people’s memory? Or are we not really different and we deserve the extremely bad reputation that we have? That’s what made us plunge into data.”

The paper assembled a racially diverse team to tackle the subject.

“This is not representative of the Globe,” Wen said. “But we felt it was important.” (The Globe’s newsroom is about 7 percent African-American, said Wallack.)

The result: “tense, frank moments where we went back and forth with language and tone — what to leave in and what to cut out,” said Johnson. Even the headline was roundly debated. Although some top editors wanted “Is Boston Racist?,” the reporters doing the work successfully argued against the idea as superficial, with the potential to attract derision that would distract from their findings.

Muhammad asked the journalists what surprised them in their findings.

Walker, whose columns often address issues of race, noted gaps between “How we think of ourselves and the reality,” adding: “Everything was a bit worse than we thought it would be.” Wallack agreed. “The absence of people of color in so many communities was even more extreme than I realized.”

The scope of the findings stood out. “One of the powerful points of the series is that you are presented with so much data that you can’t say, ‘Oh, black people just don’t work hard enough to get into this university,’” said Johnson, adding that the series looked at 25 universities. “That represents systems that are actively keeping people out. Keeping people from engaging in a meaningful way.”

Despite the apparent lack of progress, the journalists noted, there has been change.

“The percentage of black people in the city of Boston hasn’t changed much, but you have more people here who come from somewhere else, and a large percentage of people who are Latino or Asian,” said Wen.  “I’ve been really impressed with how people seem eager and ready for a more candid discussion.”

“It used to be when you wrote about race, people would go crazy,” said Walker. “Now only some people go crazy. That has been heartening.”

The challenge, the team agreed, lies in how willing Bostonians are to make changes — including financial investments — to create a more diverse city.  In a way, the city’s sense of itself as a bastion of education and liberal thought plays against real and lasting growth, cautioned Muhammad, citing “the arrogance of liberals who always think they’re on the right side of history.”

“Liberal racism,” agreed Wen. “That is at the core of the Boston problem.”