The Sox beyond Fenway 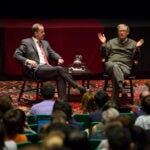 Team leadership talks about its responsibilities to the communities it represents

As the Boston Red Sox look to build on their strong start this season, the team’s work off the field, including its efforts to support inner city children and to confront racism, took center stage at a panel discussion Friday at the Radcliffe Institute for Advanced Study.

Hall of Fame pitcher Pedro Martinez and others speakers at the forum highlighted the unique responsibilities of professional sports teams in their communities and how the Red Sox in particular have tried to step up to the plate to be a positive force for their region.

“In Boston, probably more than everywhere else, it’s easy to see baseball as a social institution,” said moderator Shira Springer, sports and society reporter for WBUR radio. “The organization is woven into the cultural and social fabric of the city, of New England, in a way I think creates a sense of belonging and a sense of community, both inside and outside Fenway Park.”

Kennedy spoke of the Red Sox’ recent efforts to combat racism, including its request — recently approved by a Boston commission — to rename Yawkey Way because of its connection with former Red Sox owner Tom Yawkey, perceived by many to have overseen a racist legacy.

Citing the team’s “shameful past with respect to race relations,” Kennedy said, “We were the last team to integrate, we had a poor record of hiring not just on the field but off the field. Diversity was a huge issue for us.” But he said that renaming Yawkey Way, the street in front of Fenway Park, was “really about people and people’s feelings.”

In speaking to community leaders, employees, and players, Kennedy said, the team consistently heard the refrain that “ ‘We never knew Tom Yawkey… But that symbol had been a reminder for many people that Fenway was not always the most inclusive, welcoming environment.”

“It’s just one step — it’s a symbol, it’s a street name. We don’t fool ourselves and think it’s going to change things overnight,” he added. “We still need to walk the walk and do the right thing with respect to making Fenway welcoming to everyone… It should be everyone’s team.”

Kennedy also spoke of how two incidents at Fenway Park last year, in which a visiting player reported being taunted with racial epithets, and a fan uttered a racial slur regarding a Kenyan woman singing the national anthem, spurred the team to take action against lingering racism.

“For us as an organization, I think it was a wake-up call,” he said.

He said the team chose to take on the issue directly, joining with Boston’s other professional sports teams on an initiative to combat racism, including by forbidding hate speech at their venues.

Martinez, who spent seven seasons with the Red Sox and is now a special assistant for the team, said he has not been personally touched by racism in the city.

Salwasser, a former professional soccer player for the Boston Breakers, said being hired to head the foundation in January was “a dream come true” because “I know the power of sport” and the impact the foundation is making, including through a college scholarship program and an inner-city baseball initiative that also promotes positive decision-making.

Reflecting on his own extensive charitable work in his native Dominican Republic and locally, Martinez said it is rooted in the extreme poverty he experienced growing up.

“I’ve been there… I know what it’s like to need something and not have it,” he said.

The ace pitcher wants to be remembered not for his baseball accomplishments, but “as a sign of hope, as a sign of opportunity for other to follow,” Martinez said, “because if I can do it … they can also do it.”

Martinez said  young players need to understand that particularly in today’s social media culture they need to always be “responsible and accountable” for their actions, both inside and outside the ballpark.

“My advice would be to really pay attention  to those little details and understand that everything they do means something to someone,” he said.