Getting the record straight 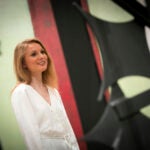 Italian director and actor discusses her assault charges against Harvey Weinstein, and the backlash from Italy’s press

Ronan Farrow won a Pulitzer Prize on Tuesday for his reporting in The New Yorker about the many sexual assault claims made against Hollywood producer Harvey Weinstein. Four days earlier, Italian director and actor Asia Argento, who had shared her own nightmare with Weinstein for the story, chastised Farrow for his “simplification.”

Farrow, she said, hadn’t fully grasped the complicated nuance of her interactions with the powerful Weinstein in 1997 when she was 21, and how what she said were years of his stalking, manipulation, and “ultimate domination” of her had taken hold of her life and made her fear for her career and her safety.

“I tried to explain this,” Argento told a crowd in Harvard Hall Friday. And while she acknowledged that Farrow couldn’t devote five pages to her story, she called his summary for the article “a simplification that ruined my life.”

Argento said her willingness to come forward against Weinstein, combined with what she sees as Farrow’s mischaracterization, exposed her to criticism and harassment. In the months since the story first ran, Argento said she has been victimized again on social media and in the Italian press. The director explained that misogyny is still deeply ingrained in Italian culture and that women there who challenge men are regularly blamed, shamed, and disbelieved. When The New Yorker story ran, many critics in the Italian media questioned why she didn’t speak up sooner, go directly to the police, or say “no” more forcefully.

“It was worse than the rape, the re-victimization,” said Argento.

Argento said she has received support from other women and feminist groups in Italy, and shared her story with others who suffered similar assaults. “This is what saved me,” she said.

She also said she has spoken to Farrow about his work, and what she views as its shortcomings.

“It’s hard for him to accept that this summarization, this simplification ruined my life. He told me, ‘I am sorry that you feel this way.’ Well, it’s not that I feel this way; it’s what’s written that is wrong.”

A lawsuit that that might challenge his reporting “would take away from what he is trying to do,” said Argento, who is considering writing a book about her experience that would “explain the simplification.” Yet the director still expressed support for Farrow and his efforts. “I want him to expose other things … bless him. Mad props to Ronan Farrow.”

In the aftermath of the article, the director, who is a mother of two and a longtime advocate for the rights of women, minorities, and members of the LBGTQ community, has become a leading voice in the #MeToo movement. Before arriving at Harvard she took part in the Women in the World Summit on April 12 in New York City. Last month, she addressed the European Parliament in Brussels ahead of International Women’s Day.

At Harvard, she continued to call for change in how women are treated. Power structures that enable abusers must be dismantled, said Argento, and sexual predators who commit crimes should be sent to jail, not to a spa, as she said Weinstein was, to be “cured for sex addiction” in Arizona.

“He belongs in jail.”

In the months since stories broke in The New York Times and The New Yorker, dozens of women have come forward with allegations against Weinstein, ranging from rape to sexual harassment, and criminal investigations into several complaints are ongoing.

Argento also wants to see change in her native country. More women need to be in positions of power in Italy, she said, instead of men like former Prime Minister Silvio Berlusconi, who is better known for corruption allegations, sexual scandals, and objectifying women than for reform. In addition, harmful laws, such as the six-month statute of limitations for sex crimes, need to be changed, she said.

Despite the backlash at home, the director said she refuses to remain silent, and she encouraged women who may be suffering in silence to share their experiences.

“I have to be a part of this movement,” said Argento, “especially in Italy where the situation is so difficult, and to bring the word outside. Because talking to you gives me strength to continue, and I hope you will do the same after this — and if you are suffering the same, to share it. This movement, I can’t see it stopping … I see it becoming bigger and bigger.”

Argento’s talk was sponsored by sponsored by the Mahindra Humanities Center at Harvard, the Women and Public Policy Program at the Harvard Kennedy School, the Office of Sexual Assault Prevention and Response at Harvard, One Queer Harvard, and by the Committee on Degrees in Studies of Women, Gender and Sexuality.