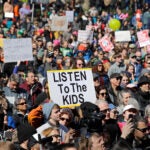 Among young, trust in social media is low, poll says

Citizenship brings a range of rights and responsibilities in countries all over the world. But in many nations, according to Radcliffe Dean Lizabeth Cohen, “the link between gender and rights is hardly a settled issue.”

Cohen’s remarks opened “Who Belongs: Global Citizenship and Gender in the 21st Century” on April 6. The Radcliffe Institute for Advanced Study’s annual gender conference touched on topics ranging from the hijab to the history of citizenship in America to the rise in nationalism in the U.S. and abroad, and worrying trends of intolerance and exclusion.

In a morning discussion titled “Rights, Duties, and Responsibilities,” moderator and Washington Post columnist E.J. Dionne ’73 voiced a common sentiment among the panelists, lamenting that the “We” that begins the U.S. Constitution is rarely heard in today’s contentious social discourse.

In the wake of the 2016 election, pundits and politicians have argued the heightened political polarization in the U.S. reflects an “us versus them” mentality that then-candidate Donald Trump seized on during the presidential campaign. A year later Trump issued a series of executive orders banning travel to the U.S. from a range of Muslim-majority countries, leaving many with families and deep ties to jobs and schools in America stranded outside its borders.

Hong added that while Trump “is using detention to weaponize misery,” his actions are no different from those of previous presidents, including Barack Obama.

“All of these practices are worthy of alarm and are worthy of criticism, but I want to highlight that the Trump administration is doing nothing new that prior administrations, including and especially the Obama administration, have not done,” she said. “Even the most shocking example of separating mothers from their children is only different in degree, not in kind from the past 20 years.”

In what will come as no surprise to many women, Princeton University Professor Tali Mendelberg called public speech a domain of “highly gendered authority,” where men typically take the lead and often talk over or interrupt their female counterparts. Even high-ranking women in a room full of men can find it hard to break into the conversation, said Mendelberg. She cited former U.S. Secretary of State Madeleine Albright, who in her memoir acknowledged keeping quiet in meetings early in her career for fear of sounding unintelligent, only to later hear a man praised for the same idea.

As tough and talented as she was, said Mendelberg, even Albright “found herself tongue-tied.” She said the problem reflects gender imbalances in and outside of the workplace, and the solution requires “recruiting more women into positions of power” and encouraging more self-awareness in men.

According to Mendelberg, numbers are key. Her research into the dynamics of group dialogue suggests women are treated the same as men when they comprise a supermajority of a group, not the 30 percent that had been noted in previous studies. “Even 30 or 40 percent still leaves women in a distinct minority,” said Mendelberg, adding that decisions made by majority rule mean “the majority identity group” sets the tone and determines who gets respect.

Samantha Power, J.D. ’99, former U.N. Ambassador and Anna Lindh Professor of the Practice of Global Leadership and Public Policy at Harvard Kennedy School, turned her international eye on the U.S. as moderator of a morning panel dedicated to borders, belonging, and boundaries, noting that what it means to be American is increasingly “up for grabs.” Many of those currently in positions of power, she said, are “shrinking the concept of Americanness and elevating very specific groups of Americans to a kind of privileged, almost normative status.”

Offering an international perspective on belonging, Sarah Leah Whitson, executive director for the Middle East and North Africa division of Human Rights Watch, said that in Saudi Arabia, leaders have promised series of reforms in recent months that include allowing women to drive, attend sporting events, and apply for jobs that had been reserved for men. So far, however, substantial change has yet to materialize, Whitson said, noting that “the circumstances that led to the government prioritizing these reforms didn’t happen overnight.”

Saudi women activists have been fighting for years to change the regressive system, despite retribution that could include long jail sentences. Whitson pointed to a number of effective collaborations between activists and Human Rights Watch, including social media campaigns, informational videos, and influential reports in which Saudi women described how the restrictive guardianship system, which gives men extensive authority over women, was “ruining their lives.”

An author whose work focuses on notions of home, belonging, culture, identity and conformity took part in the afternoon keynote conversation with author and Harvard alumnae Celeste Ng ’02.

Jhumpa Lahiri, whose “Interpreter of Maladies” won the Pulitzer Prize for Fiction in 2000, began by reading her story “The Boundary,” a short piece published in January in The New Yorker. The narrative follows a young girl whose immigrant family takes care of a holiday home rented by vacation guests from out of town. It’s a tale of cultures and class, and an example of crafting a narrative in another language. Lahiri, who lives in Rome, wrote the story first in Italian, then translated it into English.

During a conversation with Ng, Lahiri, who teaches creative writing at Princeton, said she and her family moved to the U.S. from India in 1969, benefitting from President Richard Nixon’s expanded immigration policies. Her parents impressed on her “that weird sense of gratitude that the doors opened for you.”

But Lahiri never cultivated any particular identity for herself, neither Italian, American, or Indian. She called that lack of identity central to her craft, telling Ng that avoiding a precise identity is crucial for a writer “because it is that vacillating formless state, in which we can shape-shift into anything or anyone at any time or any place, that allows you to create, to create characters, and to create a world that isn’t yours and to think your way, feel your way, understand your way to other hearts, other souls.”

“Once I became a writer, that stateless state of being became my instrument,” she said. “It’s my only instrument, and I think that is something that I very carefully cultivate at this point because I know that that is the only instrument that allows me to work.”