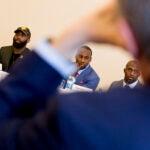 “Everything was brown, barren, leveled to the ground,” said Trigo Reyes on a recent morning in Wasserstein Hall. “It looked as if the island had been hit by a nuclear bomb.” 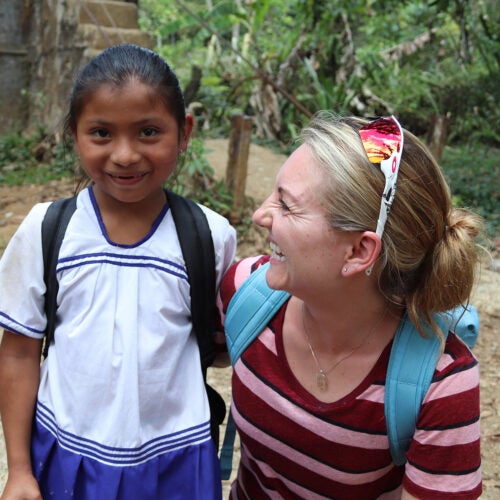 Six months later, Puerto Rico is still reeling from the devastation, but to Trigo Reyes, who just came back from a weeklong trip as part of a humanitarian and legal brigade, the outlook is hopeful.

“Now, there is vegetation, and you can see the green,” she said, “and even though the government response has been slow and insufficient, there is a sense of hope.”

Trigo Reyes led a group of 29 HLS students who traveled to Puerto Rico over spring break to lend a hand to local residents who are still struggling to obtain disaster relief aid. Puerto Rico is a U.S. self-governing territory and its inhabitants are American citizens, although they can’t vote in presidential elections or elect representatives to Congress.

The HLS trip was spearheaded by Andrew Crespo ’08, assistant professor of law, and coordinated by the Office of Clinical and Pro Bono Programs, led by Lee Mestre. The students joined forces with local groups such as Fundación Fondo de Acceso a la Justicia, Ayuda Legal Huracán María, Caras con Causa, and ConnectRelief, all of which are working to protect the rights of Puerto Rico residents to federal assistance, employment, and housing protection.

Hurricane Maria was the most devastating hurricane to hit Puerto Rico in 80 years. The death toll reportedly surpassed 1,000, and tens of thousands are still living without electricity, safe drinking water, or adequate shelter. The destruction has deepened the woes of the territory, which was already facing a $70 billion debt.

For five days, HLS students helped dozens of people in nearly 45 municipalities across the island file appeals with the Federal Emergency Management Agency (FEMA) for disaster relief assistance. More than 60 percent of FEMA applications are denied due to lack of proper documentation, according to reports.

In some cases, residents lost their property deeds and other legal documents in the hurricane, and in others they lacked titles because they had inherited the land from their relatives without formal documentation. To receive disaster relief for house repairs, FEMA requires proof of ownership, and applicants must have proof of occupancy for assistance replacing lost personal belongings.

Students interviewed in Spanish, and a supervising lawyer prepared affidavits to support their appeals. While residents were glad to have the free legal assistance, they already are growing concerned about the next hurricane season, which starts in June.

“A lot of what we did was listen to people,” said Trigo Reyes. “They’re traumatized by the disaster and their losses, and they worry they still don’t have a roof over their heads, and the hurricane season is going to start soon.”

Some HLS students joined local organizations that were helping elderly or disabled residents clean out debris the hurricane left in their homes. Most of the work was focused in Caimito, a poor neighborhood near San Juan. Students also took part in cleaning up a mangrove forest in Cataño, also near San Juan. Mangroves help control erosion and protect coastal lines.

Thinlay Chukki, LL.M. ’18, was part of the humanitarian brigade. She and 10 classmates worked on several houses damaged by the hurricane. They scraped paint off walls and, after spackling holes, sanded and painted. The students bunked in a house where they had to share one toilet and two showers.

“It wasn’t easy, but I discovered how similar human beings are beneath the different surfaces,” said Chukki, a Tibetan refugee who grew up in India. “We students had a desire to help as much as we could, and the people we were helping were so kind to us, sharing the little they had.”

The experience left a mark on Chukki and reinforced her desire to pursue a career in public interest law. Something similar happened to Kevin Ratana Patumwat, J.D. ’19, who was sent to Ponce, Puerto Rico’s second-largest city, to help residents file FEMA appeals. Patumwat also said he was touched by people’s generosity and grace.

“It was a powerful reminder that there are many ways to embrace the legal profession, not only as an attorney in top law firms, but also in areas where you can lift people up, give hope, and make changes in people’s lives,” Patumwat said.

More than a decade ago, a similar trip had a big impact on Crespo, who was an HLS student when Hurricane Katrina swept through the Gulf Coast in 2005. Crespo spent a week in Mississippi, helping tear down wrecked houses, as part of a humanitarian brigade sponsored by the Office of Clinical and Pro Bono Programs.

“I remember the national reaction to Hurricane Katrina,” said Crespo. “The whole country wanted to help. It felt that part of being American was wanting to help our fellow Americans who were struggling. With Hurricane Maria, it felt different. It felt like a struggle to get the country to realize that there were 3 million Americans without electricity or drinking water.”

The HLS community response exceeded expectations, said Trigo Reyes. Nearly 90 students signed up to travel, but the School lacked the resources to send all of them. Students had to apply for a spot, and most wrote that they had volunteered because they believed Puerto Rico residents were not getting the help they were entitled to, she said.

“It was inspiring,” said Trigo Reyes. “We can’t guarantee that our work with FEMA appeals would be successful, or that more money would come from the federal government, but we felt we brought a sense of hope.”