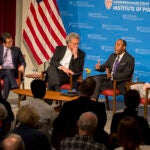 A rise in hate, a need to respond

Harvard is hosting a conference on prison education, bringing to campus for the first time formerly incarcerated students and activists to discuss the University’s long relationship with correctional facilities.

“Beyond The Gates: The Past and Future of Prison Education at Harvard,” which begins Monday, will also convene a capstone event chaired by Danielle Allen, the James Bryant Conant University Professor and director of the Edmond J. Safra Center for Ethics, featuring Michelle Jones of New York University and the Indiana Women’s Prison Higher Education Program and Kaia Stern, co-founder of the Harvard Prison Studies Project.

As part of the conference, a documentary titled “The Past and Future of Prison Education at Harvard,” which traces the University’s connections to prison education, will premiere Tuesday night at 6 p.m. in Sanders Theatre. (Admission is free, and tickets are available in person and online through the Harvard University box office.)

“Education is a basic human right that is, all too often, systematically denied to people in prisons across the country. We have an opportunity for Harvard in its mission to train students to be 21st-century leaders who engage practical learning that makes a difference in the world. Prison is a place that embodies the nexus of race, class, and gender,” said Stern, who organized the conference with Elizabeth Hinton, assistant professor of history and of African and African American Studies, and Garrett Felber, a visiting scholar at the Charles Warren Center.

“By creating opportunities for Harvard students to learn with and from students in prison, we demonstrate a commitment to transformative education, education that is rigorous and reckons with questions of justice and equity,” Stern said.

Stern has been working to bring students from Harvard into the Norfolk and Framingham correctional facilities, which respectively house men and women, to learn alongside students from Boston University’s Prison Education Program since 2008, when she co-founded the Prison Studies Project with Bruce Western, formerly a Harvard professor of sociology. Now housed at the Warren Center, the project created the first nationwide directory of higher education programs in U.S. prisons and received a Harvard Initiative for Learning and Teaching grant in 2012. The last Harvard class taught in the prison was in 2013.

Stern hopes the conference will formalize efforts to reintroduce and sustain integrated classrooms in local prisons as part of a curriculum for college credit, which, she believes, is an ingredient to reduce mass incarceration.

“Education is a basic human right that is, all too often, systematically denied to people in prisons across the country.”
— Kaia Stern

“The first time I visited Norfolk prison was in 2007, on behalf of [Harvard Law School Professor] Charles Ogletree, who had been invited by some of the incarcerated men to come in and teach. People who live and work in prisons know that education changes culture, reduces institutional violence, and interrupts intergenerational cycles of incarceration. I often think of the game we teach our children: musical chairs. We are teaching scarcity and competition. There are not enough resources for everyone to enjoy. Well, there really are enough. In fact, you can see the abundance of chairs piled in the corner of the room. You just can’t have access to them.”

Claudine Gay, dean of social science, last year launched the Faculty of Arts and Sciences Inequality in America Initiative, which is co-sponsoring the conference. She said she welcomes the “groundbreaking” conference.

“The carceral state is deeply implicated in rising inequality,” she said.

Felber, who founded Liberation Literacy with community members and incarcerated students at Columbia River Correctional Institution in Oregon in 2016, said these kinds of programs are equally beneficial to both groups.

“It’s so valuable for everyone to work through that dynamic. It’s not like it’s not messy, but there are all kinds of ways that learning happens that it doesn’t in a traditional classroom. Here it’s often intergenerational. Liberation Literacy students are ages 18 to 60. We had debates all the time on prison abolition, and those conversations sharpen everyone’s analysis. We do peer editing and film nights. We publish a newsletter of co-authored pieces. Everyone’s getting something really important out of it.”

Sonya Karabel, a Harvard junior studying social studies and African and African American Studies, said helping plan the conference makes her “excited to be part of something that has a real chance of making a real change.

“Sometimes it feels like student activism is symbolic and broad, but this is something concrete,” said Karabel, who serves on the board of the student-run Harvard Organization for Prison Education and Reform (HOPE), which tutors in local correctional facilities. “I came to College knowing this was what I wanted to do. It’s the ultimate example of wanting a diverse community of learners on this campus. You can come face-to-face with people you learn about in the abstract and see they are people as smart as us who have not had all the life chances we’ve had.”

The three-day conference is also co-sponsored by the Mahindra Humanities Center’s Mellon Seminar on Violence and Non-Violence and the Hutchins Center for African & African American Studies, and will culminate with a recorded debate between the Norfolk Prison Debating Society and the Harvard College Debating Union.

Harvard’s involvement with prisons dates back to 1833, when Divinity School students tutored prisoners at Charlestown State Prison in Boston. An alumnus named Howard Belding Gill, 1913, M.B.A. 1914, designed Norfolk Prison to look like a college campus in order to foster a sense of community. HOPE, which was founded by the Phillips Brooks House Association in the 1950s, tutors men, women, and juveniles at minimum- and medium-security facilities every week, and awards scholarships for college and post-college degree classes.

Hinton said some of what “Beyond the Gates” proposes “is a rich part of Harvard’s history” and matches up well with the pioneering work that’s been done at Norfolk and Framingham.

“What Norfolk looked like in the 1920s through the 1950s is a model, really. The prison had a jazz orchestra, a newspaper. Framingham as well — there was a sewing club, and the women put on plays. These were meaningful activities to do,” she said.

Hinton visited one of Liberation Literacy’s first meetings to discuss her book “From the War on Poverty to the War on Crime,” and has supported the group ever since. Her passion for the conference is both academic and personal.

“Historians were really late to the study of mass incarceration, and I had to convince some people why the issue of crime control is an important historical question. I came to this topic, in part, based on my own experience, my family, and visiting people who were incarcerated,” she said. “I was born in the crack era and saw how unemployment and poverty led some members of my family to drug abuse and incarceration. I witnessed that cycle firsthand, and its impact on generations of Hintons.”

Stern, who has been a student or teacher in prisons for more than two decades, sees the conference as an opportunity to catalyze sustained action that students are eager to join.

She said she and the Rev. Jonathan Walton, Plummer Professor of Christian Morals and Pusey Minister in the Memorial Church and professor of religion and society, called an early morning meeting in the basement of Memorial Church during exam week in the winter of 2014.

“We were working to discern student interest in prison studies. More than 50 people came from across the University: HBS, FAS, HMS, HLS, GSD, HGSE, HDS, and HSPH. It is clear that there is student hunger to make connections about prisons and justice — to be part of education that truly meets the goals of diversity, inclusion, and belonging.”