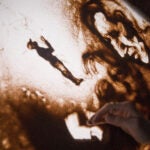 In City Hall in Indio, Calif., hangs the Ortiz Wall of Service, a plaque listing more than 50 names of military servicemen from Richard Martinez III’s family.

“It dates back to the Mexican-American War — on the American side — and I’m the last name. I’m fourth-generation infantry,” said Martinez, a College freshman and an Army veteran who served in the 82nd Airborne Division.

But Martinez, who is 21, ultimately wants his name not on a plaque, but heard making an impact on the community.

“There is a van 10 minutes from my house in Fresno that takes workers to pick in the fields. There are younger kids starting from age 8 to people even over the age of 60. Some kids don’t go to school because they have to work and provide for their family,” he said. “It’s an image I grew up with, and something no other culture or race does, but it’s prevalent, and I’m tired of it.”

Martinez grew up in a modest neighborhood of West Fresno, the son of two teachers (his father has a radio talk show called “To the Point with Super Mex”).

“They gave me every opportunity they could with what they had,” he recalled. “My dad, who grew up very poor, thought the elementary school I attended was not a wholesome view of what the Hispanic community is. So in seventh grade I was sent to school in neighboring Madera, where there was a much higher percentage of Mexicans and minorities in general. It was culture shock and I literally and figuratively got my ass kicked.”

Martinez returned to Fresno for high school at a public charter school that emphasized academics and the arts.

But despite his academic success, while his friends were applying to college, Martinez enlisted to serve his country.

“The Army was much different for me. In some ways, my life before the Army was harder. What I got was perspective. It was, in some ways, a safety, but a safety no one would ever look down on,” he said.

In 2015, Martinez deployed to Iraq as a paratrooper with the mission to advise, assist, and train Iraqi soldiers — some of whom later died in action.

“I realized what I have compared to what they have, and I have everything,” he said. “Being a soldier was the best they could do. It was the only steady paycheck they could find.”

As his hitch wound down, Martinez decided to apply to college. He retook the SATs, then he aimed high.

“I had a lot of time to think. I wasn’t satisfied with the bare minimum,” he said. “I hadn’t written anything in four years before writing the college application essays.”

Last year Martinez stepped onto the Harvard campus with enthusiasm. He moved into Hurlbut Hall; dove into a philosophy seminar on Friedrich Nietzsche, “Ottoman State and Society,” and Expos 10 and 20; joined Arts and Humanities Dean Robin Kelsey’s student board; and made the wrestling team, another tight-knit band of brothers who helped him find his way as an older freshman.

“I don’t know what the school year would have been like without them,” he said.

The reverse is probably true as well.

“Richard has had many experiences that most of his classmates will never have. I’m always struck by how he doesn’t take anything for granted — about his schooling, or about being in the classroom,” said Rebecca Summerhays, a preceptor in the Harvard College writing program. “He seizes every opportunity to think critically and to become involved in the discussions. He would never sit quietly and let others have the discussion.”

Summerhays has been struck by Martinez’ eloquence, and by the way he related personally to assignments. To write about the Harvard Art Museums, he toured them with a classmate who had never been in an art museum.

“I know they had a meaningful conversation on how to approach art for the first time,” she said. “Richard became a role model.”

That’s something Martinez says he hopes to be not just to his classmates, but to other Mexican-Americans and to military men and women of all backgrounds considering higher education. His Army buddies “are incredibly smart people,” he said, but many were surprised that he would apply to an Ivy League school.

“They said, ‘Martinez, you’re crazy. It will never happen,’” he said. “They just think community college, but they could be here too.”