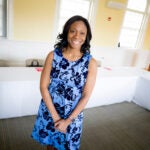 Everybody loses a night of sleep sometimes — on campus, especially during exams. According to Nora D. Volkow, who gave a talk at Radcliffe’s Knafel Center Thursday titled “The Sleep-Deprived Human Brain,” a single sleepless night is probably harmless. But the cumulative effects of sleep deprivation may be more dangerous than is currently understood.

Volkow, now the director of the National Institute on Drug Abuse at the National Institutes of Health, was a pioneer in positron emission tomography (PET) brain imaging, and helped carry out early studies confirming the toxic effects of cocaine. At Harvard, she reported on two sets of brain-imaging studies that shed light on the way sleep deprivation interferes with cognition, as well as its possible links to dementia and Alzheimer’s disease.

Her work in drug research, she said, led to an investigation of sleep patterns. One toxic property of cocaine is that it interferes with sleep.

“If you give cocaine to an animal, it is the only drug that will cause it to forgo sleep, and the animals ultimately died because they did not survive this,” she said. Yet lack of sleep itself produces some of the same adverse effects that drugs do: It disrupts memory, inhibits alertness, and can contribute to obesity.

“It also results in accidents, and there are more fatalities associated with improper sleep behavior than there are with alcohol,” said Volkow, whose presentation was a 2017–2018 Kim and Judy Davis Dean’s Lecture in the Sciences..

Volkow’s work included a look at the effects of sleep deprivation on the dopamine system, which regulates alertness and overall brain function. After running magnetic resonance imaging and PET scans on sleep-deprived human subjects, she found that lack of sleep inhibited certain parts of dopamine transmission: Brain cells were able to release dopamine, but not to receive it.

“The decrease in dopamine receptors can be likened to going to an auditorium when nobody is there,” she said.

“When people are sleep-deprived they are less likely to regulate their desires, and they engage in impulsive behaviors,” Volkow said.

One drug that appears to actually be advantageous — at least in the short term — is caffeine. Drinking coffee, she said, may temporarily increase dopamine receptors, thus countering the effects of sleeplessness.

A second, as-yet-unpublished set of studies that Volkow quoted suggests a link between sleep deprivation and dementia. It is known that the brain’s glymphatic system flushes out toxins during sleep. Studies in mice have shown that fluids from blood vessels, the spine, and other parts of the body flow to the brain during sleep, helping to remove a toxic protein called beta amyloid from brain tissue. (These proteins tended to accumulate when the animal was sleep-deprived.) Unlike mice, humans can survive more than a few days without sleep, but beta amyloid buildup has been linked to dementia and Alzheimer’s disease.

Volkow decided that similar studies could be done in humans. This research showed that even one night without sleep increased the accumulation of beta amyloids — though Volkow was surprised to find that the increases were found only in the right hippocampus. One night of good sleep could reverse the process, she said, but continued sleeplessness could push the toxins to dangerous levels.

“We can document an association between poor sleep quality and a higher beta-amyloid burden in the brain,” she said. “This is consistent with prior reports, and we show that these are independent from the higher burden associated with genetic risks.” This, she suggested, shows a scientific reason why sleep is necessary for a healthy brain.

Volkow said clinical research has too often neglected the importance of sleep, for which the evidence is clear, she added, of an important role “in the capacity of the brain to renew itself.”