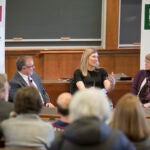 One win against weapons could fuel another

In 1994, Rwanda lost a huge portion of its male population when the ruling Hutu government murdered 500,000 to 1 million of its citizens, including an estimated 77 percent of the Tutsi population. The genocide left an enormous void, widened by the number of Rwandans who had fled or been imprisoned — and women stepped up to fill it.

Nearly a quarter century later, the country’s leadership is overwhelmingly female. Rwanda has more women parliamentarians than any other nation in the world, and almost half of its judges and presidential cabinet members are female. In the same short time, Rwanda has forged progressive health, education, gender equity, and environmental policies.

That new body politic can help explain an emerging trend. Across the globe, the number of women running for office has increased dramatically. In the United States, for instance, more than 70 women are exploring runs for governor this year, and a record number of women have declared their intentions to run for other elected positions, from seats in Congress to local school boards. As this wave of civic engagement grows, the rise of Rwandan women through all levels of their government merits closer observation.

And it has had that, from former U.S. ambassador Swanee Hunt, Harvard Kennedy School’s Eleanor Roosevelt Lecturer in Public Policy, founder of the Women and Public Policy Program, core faculty at the Center for Public Leadership, senior adviser at the Carr Center for Human Rights, and the author of “Rwandan Women Rising.” She spoke with the Gazette ahead of Wednesday’s Lowell Lecture at Harvard Extension School, where she will reprise those lessons learned in her talk “Women Rising, Here and Abroad.”

GAZETTE: We seem to be at a crucial point in history, with adults and even young people becoming more vocal and politically active. What have you learned about the importance of civic engagement that you did not know before your work in Rwanda?

HUNT: Rwanda provides a compelling model for the rest of the world. After the 1994 genocide, civic engagement grew organically, driven by newly emboldened women. The chaos had cracked open the culture and women surged into the breach. Before, they weren’t allowed to speak in public if men were present. Afterward, many traumatized men couldn’t function well, but women saw no choice but to immediately start rebuilding their communities.

That social and political will turned into an unstoppable force. Within months, new widows joined wives of jailed alleged perpetrators. They did what women do: Together in one kitchen, they cooked for orphaned children, and at the same time for the men who made those children orphans. Women persisted, organizing 15,000 female-only village councils. They had representatives on the commission to draft a new constitution that established a provision that all government bodies would include at least 30 percent women. Today, Rwanda boasts the highest percentage of women legislators in the world, around 60 percent. The country is vaulting up the development indices, increasing literacy and combatting AIDS and malaria, establishing compulsory ninth-grade education for girls as well as boys, and many other advances.

It’s a fascinating lesson, told in my book through the voices of scores of women (and a few smart men). As one example, Annonciata Nyirabajiwabo’s husband and parents were murdered in the upheaval. She escaped certain slaughter, carrying her 18-month-old baby on her back while eight months pregnant, giving birth alone, hiding in a doghouse. After the cataclysm, Annonciata stepped forward to join the civic groundswell. She said, “There is no other way of living than to be close to one another.”

Here in the U.S., we’re hoping it won’t take a full-blown catastrophe to get people off their couches, into the streets, lined up at voting booths, or — even better — onto ballots. I’m especially encouraged that young people are building their power at a crucial moment. We see it all around us: the tenacious leaders of Black Lives Matter; speakers at the women’s marches; courageous champions of immigration reform; out-there #MeToo witnesses; inspiring gun-control activists from Parkland; and a swell of female candidates entering political contests at all levels. I used to regret that my children had missed the ’60s, an era that helped define Hillary Rodham and Bill Clinton, and so many others my age. Now my three kids and their children are part of the greatest movement in half a century.

GAZETTE: You’ve had almost 24 years to reflect on the events of the genocide and what came after. What parallels do you see between the rise of Rwandan women and the increase of women in America seeking public office today?

HUNT: Women rise because it’s necessary. In Rwanda, following the carnage, about 800,000 imprisoned men awaited trial, with about 50 surviving lawyers to represent them. Drawing on a tradition for mediating disputes, women instituted a community-based justice system called gacaca. It helped the entire nation unify and move beyond mass trauma.

Imagine: A man is brought forward to face the villagers where he has lived. Some of the women are judges. (That’s new.) Even as the majority of victims are female, the majority of the witnesses are as well. The say what they saw the man do; they know him extremely well, and they testify to his character. The whole case costs $30. At the same time, the U.N. tribunal is hearing cases against people who allegedly plotted the genocide — at $2.6 million per defendant.

In the U.S., women have had it with malfeasance, misbehavior, misogyny, and malevolent policies that harm them and their families. The “Year of the Woman” in 1992 was the last time we increased our numbers in Congress significantly. It came on the heels of unheeded accusations of sexual misconduct during Anita Hill’s testimony against her former employer, Supreme Court nominee Clarence Thomas. That spectacle unfolded in front of the all-male Senate Judiciary Committee — and on live television, where it outraged millions of women (and men).

In dozens of contexts around the globe, I’ve observed what happens when women aren’t at decision-making tables. As U.S. ambassador to Austria, I bore devastating witness to the havoc and suffering caused by war next door in the Balkans, where nearly 150,000 people died. In 1994, I hosted 14 days of peace negotiations, but it wasn’t until I walked into the signing of the agreement at the White House that I noticed the sea of gray suits and realized no other women were among the dozens of delegates. Women’s disparate knowledge and perspective was missing. Without an inclusive accord, the agreement was badly flawed, and the country has been unable to move forward appreciably. Now we have compelling research: When women are significantly involved in a peace talk, there’s a much greater chance for lasting stability.

Dean Joseph Nye, who brought me to Harvard two decades ago to establish and lead the Women and Public Policy Program, saw women’s inclusion as a natural extension of his idea of “soft power.” In short, political influence is increased through persuasion rather than only coercion, focusing on shared values and civilian elements of security such as education, health care, and economic development. I’ve taught the doctrine of inclusive security to a generation of Harvard students, and I imagine some of them are behind the landmark Women, Peace, and Security Act passed by Congress last fall.

GAZETTE: According to a Time Magazine article from earlier this year, more than 70 women are exploring runs for governor in the U.S. and overall a record number of women are running for office in 2018. What are their biggest challenges? How can they overcome them?

HUNT: I’m glad you asked. Some years ago, I established a nonprofit program, Political Parity, to study these barriers. In a few weeks, we’re releasing a primer for students and practitioners, drafted by researchers who have delved into the data. One formidable challenge is that women candidates, particularly Republicans (God bless ’em), haven’t managed to get through their primaries. Women have been disadvantaged by infrastructure, with insufficient PAC, donor, and party backing.

They’re misperceived as less ideological than men, though our analysis disproves this. But we also know that women, however dogmatic, co-sponsor more legislation across the aisle. So if we’re going to break gridlock, we need more Republican females in place of their male counterparts. Happily, since the 2016 election, in what I think of as a Trump after-quake, thousands of women (on both sides of the aisle) are stepping up to run at all levels and gaining the support once so hard to find. It’s a seismic shift.

GAZETTE: Inclusive Security, the institute you founded, is looking for impactful ways “to transform decision-making about war and peace.” What are some of the lessons you’ve learned that could help a world that seems to be in constant conflict?

Second, we’ve obviously got to use 100 percent of our talent pool. But a more nuanced answer is that women, along with other excluded groups, can make a powerful difference in waging peace. For one thing, they bring in a wider range of voices. In Colombia, it was women in the peace talks who insisted that victims be at the table. They understood that when those who are directly affected enter negotiations, it’s messier, but peace is possible. Aloisea Inyumba, a tremendous leader who did so much to unite Rwandans, said, “We women have to be agents of peace. We can’t just wait for it to be delivered to us on a plate.”

However imperfectly, reconciliation has happened in (literally) decimated Rwanda — and elsewhere around the world — between people who have fought much more viciously than Americans will ever know. The equivalent in our country would be 32 million Americans slaughtered this winter. Actually, hacked to death. People despairing at the current state of our politics need to realize: This is not Gettysburg.