A rise in hate, a need to respond 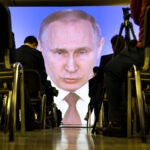 Archon Fung opened the Institute of Politics forum “Trolls, Threats and Terror: Why Is Hate Rising and What Can We Do About It?” on Wednesday night with a warning.

“We’re not going to be discussing a pleasant topic,” said the Kennedy School academic dean.

Indeed, he observed in the panel’s most sobering conclusion, things can always get much worse than they are now — and indeed, they have been.

“It has always been a dark part of the American political experience, from lynchings and the rise of the Klan to mass shootings to attacks on children of the BGLTQ community,” he said.

While the nation’s history of 3,000 lynchings may be more frightening than anything happening in America today, the same anger and hate that fueled them may well be returning to the social forefront. Fung noted that one of the night’s two panelists, Southern Poverty Law Center president Richard Cohen, traveled to Harvard with a security director. Cohen, who has litigated a variety of important Civil Rights actions, now has to worry about assassination threats. “Such are the times we live in,” Fung said.

The other panelist, former NAACP president Cornell William Brooks, reminded the audience that the NAACP itself was formed in response to a 1908 race riot in which at least a dozen African-Americans were murdered. In response to a question from co-moderator Sarah Wald, senior policy advisor at HKS, he noted that the country is facing some of the same fears of immigration that fueled the Ku Klux Klan.

“America is becoming more black and brown, and more diverse in our religiosity,” Brooks said. “What we’re seeing now is not just a demographic backlash, but a post-Obama blacklash. This cannot be ducked, it’s real. The rise of the Klan was driven by a toxic brew of anti-immigrant sentiment, a kind of faux patriotism, and a view of Christianity that is in fact antithetical to the Gospel. Today we see the same forces at work. And it’s fueled by a president who is intentionally or unwittingly — and I would say intentionally — fanning the flames.”

Though the panelists said they didn’t intend to take political sides, they said they couldn’t avoid talking about President Trump’s collusion — not with Russia, but with white supremacists. Cohen said that Trump’s general failure to denounce such groups brought the fringes closer to the center.

“This election was unusual in that white supremacists endorsed Trump. And after he was elected, Trump went on Alex Jones’ radio show and said ‘I hear you have a really fine reputation.’ That about says it all,” he said.

Brooks went a step further and suggested that Trump sometimes appeased such hate groups. “When you appoint Steve Bannon to high office, someone whose business model is propagating hate, then you have created a de facto office of legitimacy for the alt-right, i.e., white supremacy.”

Wald challenged Cohen on one of his organization’s more controversial positions: naming nonviolent organizations such as the conservative Christian lobbying group Family Research Council as hate groups. Cohen replied that haters who wear business suits are no less dangerous than those who wear white sheets.

“We don’t require violence,” he said. “[The Family Research Council] constantly demonizes the LBGT community and spreads propaganda against them. Some groups that we would consider hate groups have a foothold in the mainstream. And having that foothold makes them more dangerous.”

Some members of the audience asked what individuals can do to oppose hate. While both panelists agreed that it can be useful to engage with haters in person and online, they said the real hope lies in larger organized efforts.

“We need to get law enforcement engaged,” Brooks said. “We need to take these crises as organizational moments that build our resources, in the same way that the NAACP did.”

But both panelists expressed some optimism for the future. Brooks found a source of inspiration in the community response to the church massacre in Charleston, S.C., and Cohen saw hope in Parkland, Fla., student Emma Gonzalez’s recent campaign for gun-control laws.

“When she has more Twitter followers than the NRA in two weeks, something is happening,” he said. “I see change in the young people of our country. I just wish they voted.”