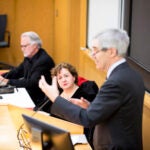 The pressures on academic freedom

Over the past four years, the trio have traveled the country to understand the loneliness, isolation, and division that plague so many in the digital age. The results were “How We Gather,” “Something More,” and “Faithful,” reports that observed the rise of new spiritual communities both inside and outside of traditional religious organizations. With “Care of Souls,” however, ter Kuile, Thurston, and Phillips go further, recommending a course of action to relieve the nation’s soul sickness and listing “jobs to be done” by a new generation of community and spiritual leaders.

HDS recently caught up with ter Kuile for more on the report — and the role that the School can play in the 21st-century care of souls.

HDS: Why do you say that “America needs to care for its soul”? What are the indicators?

ter kuile: We’ve learned to see the impacts of our crisis of disconnection at four levels — personal, social, environmental, and religious. First, we are increasingly disconnected from a sense of self. In many ways, the growing fluidity of identity is a liberatory thing. We are more able to express our gender identities, move from place to place, and form new connections. But the risk is that we lose our roots and become untethered. Personal identity is often a communal task, ironically — that’s something we’ve learned in our meaning-making classes here at HDS! So without that stable community, how do we remember who we are and whose we are? Second, disconnection is of course evident in our public life together — growing political polarization and decreasing membership of community organizations — but also in the startling fact that one in four Americans say that they have nobody to talk to about life’s important questions. Not even their family! Third, a disconnection from the natural world contributes to a sense of spiritual homelessness. Where do we truly belong? And finally, a disconnection from that which is greater than all of us. This is evident in religious disaffiliation of course, but I think much more importantly in the sense that many of us have lost confidence in the idea that our spiritual lives are important. When we don’t have a community that strengthens our practice, or with whom we share a common language to make meaning, it is difficult to keep centering our sense of the divine in our lives.

HDS: What does soul care look like? How is it different from, say, mental health?

ter kuile: The mental health crisis is well documented, and no doubt the landscape we describe is closely connected, but my sense is that soul care is a broader project. We’re looking at the intersection of belonging and becoming — the ever-interconnected questions of human flourishing and community depth. The form it takes is wonderfully broad, and will go far beyond the seven roles we illustrate in the report, of course. But hopefully we’re able to expand our communal imagination by suggesting some language for each and illustrating them with some examples.

HDS: You list seven “jobs to be done” in the care of souls. Can you talk about them?

ter kuile: We’ve spent the last four years exploring and convening this landscape of spiritual leaders — some who are wholly secular in their identity and others who claim religious language and identities but do it in an unusual way, and we kept seeing patterns across them. There’s much lower loyalty to denominational identities, and much more comfort with mixing and braiding practices and languages, for example. These seven jobs are both a reflection of what we’ve seen emerge, and what we’ve heard a need for over and over again. To illustrate one need, so many of the best community leaders we’ve encountered don’t have access to health insurance or spend countless hours managing “back-end” financial processes that could easily be fulfilled by someone doing payroll for multiple small communities, many of whom don’t have 501c3 [tax-exempt] legal status. This led us to name the “steward” as an essential role for this ecosystem.

HDS: Who’s doing those jobs now? Tell us a story or two of people you’ve encountered.

ter kuile: I think of someone like Artie Wu, who leads Preside Meditation, who embodies the “healer” role so beautifully. He’s created a seven-day audio journey of 20-minute meditations that help us identify, name, and explore mental patterns that might be hurting us day to day. As well as the mp3s you can download, Artie also hosts group meaning-making conversations over video call to coach participants through questions and concerns. It’s amazing to see how something so simple can have an enormous impact.

Or I think of Rabbi Sara Luria, the founder of ImmerseNYC, who has transformed the ancient Jewish ritual bath of the mikveh to become an important marker of life transitions. From gender identity to divorce, she empowers volunteers to co-create rituals for anyone wanting to mark a moment in their lives. She was so inspired by people’s capacity to make meaning that she’s now opened her home to become Beloved, a new [home-based] community that transcends denominational and even faith lines in order to offer anyone an experience of being beloved and in deep belonging.

HDS: How could places like HDS prepare people to inhabit these roles?

ter kuile: At its best, HDS already prepares students for these roles. In the report we quote Gregory the Great, the sixth-century pope whom we encountered in our “Introduction to Ministry Studies” class with Professors Stephanie Paulsel and Dudley Rose, with his notion that “the care of souls is the art of arts.” So much of soul care is as old as time, it is really the context that has changed so drastically. HDS is also already built on a foundation of religious difference and multiple identities. … Our hope is that HDS and other seminaries will start to explore the opportunities of explicitly engaging the formation of elders, healers, and stewards, as well as the more traditional ministry identities like gatherer. Our explorations of executive education could be a great opportunity to do this.