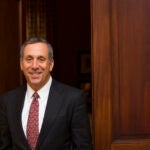 Visitors posing for photos with the John Harvard Statue may not know that the University’s namesake and first major benefactor may never have set foot in Cambridge, Mass. The English clergyman’s name is practically synonymous with this college town, but he actually lived and preached 3 miles away in Charlestown.

There’s even another square named after him on the other side of the river, no doubt a source of confusion for the occasional tourist who stumbles upon the John Harvard Mall while looking for Harvard Yard.

Harvard died of consumption in 1638 a mere year after he sailed to New England in search of religious freedom — but in his brief time here he left a lasting mark.

After a recent snowfall, we explored his old neighborhood and spoke with historian Rosemary Kverek of Charlestown and Cambridge Historical Commission Director Charles Sullivan.