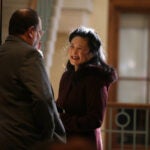 “He’s the complete package in so many ways,” said Smail, who called Deloria “hands-down the leading authority in Native American history and an incredibly charismatic teacher.”

“He can teach on a huge array of topics — not only Native American, but American studies in general,” Smail said. “Our needs in his areas of interest could easily outstrip his capacity.”

Deloria, who is of Dakota descent, grew up in a house often visited by Native American “organizers, musicians, and weirdly interesting people.” His father, Vine Deloria Jr., was a Sioux author, activist, and prominent historian. His grandfather was a leading Native Episcopal priest, and his great-aunt, Ella Deloria, was an important anthropologist. Men of the previous two generations had served as leaders within the Yankton band of the Dakota Nation, and in the Episcopal Church. Deloria is also the great-great-grandson of portrait painter Thomas Sully.

Smail hopes that Deloria will use his administrative skills to help strengthen the department’s connections with other departments and centers around campus.

“There’s no question students want courses that pay attention to the histories of the peoples without history. Native American history has taken time to develop in the North American academy, but it is starting to take off, thanks to the scholarship of people like Phil,” said Smail. “He also has strong interests in indigenous studies around the world, which has taken off as a separate field. Native American history is very similar in so many ways to the history of the indigenous peoples of Australia and Taiwan and many other parts of the world. There are a lot of opportunities for connected histories, and Phil is interested in this indigenous approach.”

The Gazette talked with Deloria about his life’s path, his scholarship, and what’s ahead.

GAZETTE: Can you talk about the connection tying your personal experience to your professional life?

DELORIA: I didn’t grow up in a tribal community, but my education was unique in many ways. I grew up in an interesting house visited by Indian leaders, country-rock musicians, and a parade of unconventional visitors. My dad was engaged with Indian politics at a national level. My grandfather was much closer to the tribal world of South Dakota, rooted in his work as a Native clergyman at the Pine Ridge, Rosebud, and Sisseton reservations. When the National Episcopal Church sought to reorient its Indian programs in the 1950s, he moved to New York City, and then led a massive reservation-by-reservation sociological study of Indian life in the church.

My dad became director of the National Congress of American Indians (NCAI) in 1964, and he went for advice right to my grandfather, who had maintained a national network of Indian leaders. After three years leading the NCAI, my dad wrote “Custer Died for Your Sins” and several other books that popularized an Indian politics framed around treaty rights and sovereignty.

My grandfather was a fluent Dakota language speaker, storyteller, and singer. Among many Indian people, tape recording was really a thing in the 1960s and ’70s, and people would make and pass these tapes around. Every chance we got, my brother and I would record my grandfather telling stories and singing songs. At one point, he recorded a record album of them. So from my dad I was seeing the politics of the ’60s and ’70s play out; from my grandfather I was getting a bit of a one-on-one cultural education. Both of those things have now become important in the ways I think about and try to tell history.

GAZETTE: You studied music as an undergraduate, and you are known to begin lectures with a piano serenade or some acoustic guitar. What was your scholarly path?

DELORIA: I played trombone in high school, and got a scholarship to study music at University of Colorado. I was a performance major for two years. But I plateaued — and I found that I really loved playing guitar. Being a professional musician started to look like an impossibly difficult life, what with all the really good trombone players out there in the world. I should note that, whenever guitar players gather, I’m pretty much the worst, so I’ve embraced life as a kind of backup bass player. I’ve never lost my love of music, but it’s always offered me a lesson in humility. I taught middle-school band and orchestra for two years and was playing part-time in an originals band, and then a punk-folk trio, and then, finally, a wedding-reception band. My musical decline was complete, from symphonies to weddings. I got into music videos, crewing on a lot of shoots for bands from L.A. who would come to make video demos in Colorado. At one point, my dad said, “Look, if you’re going to just mess around with your life, why don’t you get some initials after your name while you’re doing it?”

I went back to school to get a master’s in journalism and became a night-shift video editor. I did car commercials and industrials, and, eventually, a documentary project, “Eyanopapi: The Heart of the Sioux,” about Lakota land claims to the Black Hills of South Dakota. That was my turn back to all the history that had been in my family a long time.

I was lucky to take, as a cognate in my graduate program at Colorado, Patricia Nelson Limerick’s history of the American West class, which basically taught a version of her important book “Legacy of Conquest.” I loved the class, and I started writing two iterations of the assignments, submitting a satirical version under a pseudonym. Patty has a beautifully quirky sense of humor, and she embraced the challenge of figuring out her mystery student — which eventually led to a conversation about embarking on a Ph.D. program. I had applied for a Fulbright to Australia in order to make another documentary about indigenous lands. I did not get it. In the meantime, though, Patty had me applying to Yale.

I had no idea what I was doing there. Who was I? A twice-failed musician, substitute band teacher, night editor, basically broke all the time. I was scared, but I had a great partner, my wife, Peggy Burns, who embraced the whole adventure. Each week after seminar, she’d ask me, “Did you say anything this week?” The answer, for pretty much the whole first year, was “no.”

But I learned. All those classes and (eventual) conversations did, in fact, teach me how to think. The idea for my first dissertation, which became my first book (“Playing Indian”), exploded in my brain in something like 30 seconds one day in a lecture. I’ve never had another experience like it. My wife and I went back to Colorado, where she worked for Xerox while I tried to execute the dissertation. I adjuncted at Colorado and then, in 1994, got a job there. It is worth noting that it was the same department my father was in. At one point, we even shared an office! In 2001, I moved to Michigan, a tremendously supportive place for scholarship that also encouraged me to join with others in building a world-class program in Native American Studies. There, I passed into and through the world of academic administration, which — somewhat to my surprise — I found I loved. Every day, I look in the mirror and marvel that I’ve somehow landed on my feet. And I’m grateful.

GAZETTE: What are you looking forward to doing here?

DELORIA: Harvard is full of amazing possibilities. It has had a history with Native people that stretches back to its founding, of course, but also a more recent engagement that dates — like most institutional Native American Studies programs — to the early 1970s. The Harvard University Native American Program (HUNAP) is one of the strong foundational pillars here, dedicated not only to creating community and support for indigenous students on campus, but also to its nation-building curriculum and all kinds of community engagement. Another pillar has been the Harvard Project on American Indian Economic Development, still going strong after three decades of important work. And then there are a range of faculty members interested in Native American issues: Kay Shelemay in music, Matt Liebmann in anthropology, Dan Carpenter in political science, Ann Braude in the Divinity School, David Jones in history of science, among others. Harvard also has had a strong record over the last few years of bringing in Radcliffe fellows and postdoctoral fellows. The Native students here are tremendous, and there are lots of students from all over who are interested in indigenous studies. I want to pitch in and do what I can to help us imagine something at Harvard that is even greater than the sum of all these very strong parts.

GAZETTE: You are the first tenured history professor in Native American indigenous studies. What comes with that qualifier?

DELORIA: I want to do things. Some significant part of that will be having a positive effect on the Harvard undergraduates who will be future leaders in Indian Country, and helping train the graduate students who will advance the field. Another important part will be my own scholarship. But I’d also love to have Native American students and studies at Harvard be more visible in the Native American and Indigenous Studies Association and other scholarly organizations that are driving the national conversation. And I think there are fantastic opportunities to engage Harvard’s substantial international presence. I’m fortunate to have developed relationships with indigenous studies scholars in Australia, Aotearoa/New Zealand, Taiwan, Japan, Finland, and Canada. I’d love to develop these more deeply, perhaps in an institutional context.

I’m also a bit of a museum person, and it seems to me that there are lots of possibilities in that area as well. Harvard is an elite institution well aware of its obligations to lead critical conversations about justice and equity, politics and policy, the past, present, and the future. Indigenous people are fundamental to those conversations, though we are often left out of them. I’d like to lend my voice in whatever way I can do make sure that is not the case, that we always pause to think twice about Native American and indigenous peoples and issues.