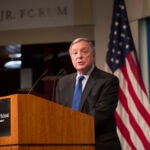 As China flexes its muscle as a global economic force, a fresh look at Eastern philosophical traditions in dialogue with Western ideas can shed light on dilemmas accompanying the country’s rise, according to scholars at a Harvard roundtable discussion Friday.

Speakers in the forum, at Tsai Auditorium, included Harvard philosopher Michael J. Sandel, whose books and lectures have earned him a robust following in China and across East Asia. The event was organized by the Harvard-Yenching Institute and moderated by the institute’s director, Henry Rosovsky Professor of Government Elizabeth Perry.

Sandel has a “wonderful knack” for making philosophical arguments widely accessible, Perry said, adding that his popularity reflects “an admirable thirst on the part of the younger generation in East Asia and in this country as well, searching for answers in a rapidly changing world, a world of commercialization.”

The event marked the publication of “Encountering China: Michael Sandel and Chinese Philosophy,” a book of essays in which leading scholars of the Confucian tradition respond to the ideas of Harvard’s Anne T. and Robert M. Bass Professor of Government.

Joseph C.W. Chan, a professor in the Department of Politics and Public Administration at the University of Hong Kong, lauded Sandel for spurring his audiences in the U.S. and East Asia to “critically reason together,” and for “challenging people’s assumptions.”

Chan posed his own challenge to Confucian scholars, including himself in a group that has “yet to grapple with the sociological challenge of advancing the Confucian agenda in modern society.” He asked Sandel, “Other than promoting free and public philosophizing, what could we realistically do to foster Confucian or civic republican ideas of virtues and community in modern society?”

“There are ways of teaching virtues not just in schools, not just didactically, but through the organization of everyday life and social life,” Sandel responded.

For his part, Hahm Chaibong, president of the Asan Institute for Policy Studies in South Korea, said he worried about potential dangers of an over-embrace of Confucianism in China.

Chaibong traced issues that led him to abandon Confucianism, including his perception that Chinese intellectuals were embracing the philosophy simply because it was Chinese, and his concern that China could follow the experience of South Korea, where Confucianism and nationalism were part of a move toward autocracy in the 1970s.

Sandel said the “growing interest in the Confucian tradition in China is important and worth encouraging because without some attempt to grapple with and reinterpret” their deepest moral traditions, societies defined by GDP alone “wind up with a vacuum of meaning.”

That moral vacuum, he added, “will be filled by the default alternative, which is not liberalism or Confucianism, but strident nationalism.”

Sandel stressed, however, that China should not embrace Confucianism as an “off-the-shelf ideological tool,” but engage with it in a way that allows for competing interpretations.

Qu Hongmei, a professor of philosophy at Jilin University in China, said that as China moves toward greater modernity, “there is no way back to the time of Confucius and Lao Tzu. So it is necessary for the Chinese people to recognize the values of democracy, liberty, [and] human rights … on the basis of their own culture.”

Noting that Sandel has been criticized both by those who believe his version of communitarianism is “too thick” and others who contend it is “too thin,” Hongmei said, “I think Professor Sandel’s version is just right for China’s philosophy today.”