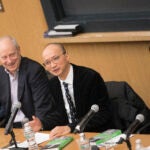 Third in a series of articles on cutting-edge research at Harvard.

A young child spends weekdays with her grandmother down the street while her parents work. Another attends an unlicensed day care center run by a neighbor. A third is with his stay-at-home dad. A fourth is cared for by a private nanny in the comfort of her own house.

Researchers have long studied how small children grow and learn in formal, high-quality preschool programs, and have found that they develop better language, math, and literacy skills as well as stronger social and emotional connections than those who don’t attend.

Yet little is known about the children who are looked after under informal arrangements involving neighbors, relatives, friends, or nannies, even though these cover 40 percent of children in Massachusetts.

Two Harvard researchers are working to figure that out.

Harvard Graduate School of Education (HGSE) professors Nonie Lesaux and Stephanie Jones, both developmental psychologists, are launching an ambitious study to follow 5,000 children, ages 3 and 4, for four years. The study will track some students before and after their elementary school years, and perhaps into adulthood. The cohort, recruited from 168 communities, is designed to reflect the changing demographics of children across the state.

Through the Early Learning Study at Harvard, Lesaux and Jones aim to update the science around child care by examining the links between children’s development and the characteristics of the educational and care settings where they spend their formative years, be those relatives’ homes or unlicensed daycare centers or, for comparison, local Head Starts and Montessori preschools.

“There are a lot of unanswered questions that parents, communities, policymakers, and school districts are grappling with,” said Lesaux, the Juliana W. and William Foss Thompson Professor of Education and Society and the School’s academic dean. “And we don’t have enough specific information to drive 21st-century policy in early education.”

“Our body of evidence is outdated. … And what’s missing is the settings described as informal or non-licensed that are offered outside the formal centers. We just don’t know very much about them.”
— Stephanie Jones

“Our body of evidence is outdated,” said Jones, a professor of education. “It’s based on studies from the 1960s, primarily. It also focuses primarily on the center-based, licensed, formal early education offerings. And what’s missing is the settings described as informal or non-licensed that are offered outside the formal centers. We just don’t know very much about them.”

In early childhood education, the most influential research includes the Perry Preschool Study, conducted in the mid-1960s at a Michigan preschool, and the Abecedarian Project, conducted in the 1970s in North Carolina. Both studies, which followed children into their adult years, found that the children who received preschool education thrived more than those who did not. The preschool children earned more money, were more law-abiding, were more likely to graduate from high school, and even were healthier.

Conducted by the Saul Zaentz Early Education Initiative at the Ed School, the new Harvard study is designed to be groundbreaking in scope and unprecedented in reach, said Lesaux.

For the first time, researchers will study informal care settings and link their features to children’s social and emotional development. The researchers plan to connect what they learn about early math, literacy, and language skills with data that reflect today’s populations and current settings. A 2016 study, supported by the U.S. Department of Education, examined the quality of informal preschool settings versus formal settings, but used decade-old data.

Earlier studies showed that children who spend more time in daycare centers make advances in language and cognitive skills, but, depending on the number of hours and the characteristics of the settings, may also develop more behavioral problems than children who spend fewer hours there.

In the new study, researchers will assess children’s progress in language, early math, and literacy skills, but also their social, emotional, neurophysiological, and cognitive development by examining their interactions with other children and their relationships with adults in their lives. Lesaux and Jones hope the Early Learning Study eventually will have an impact on national educational policy.

“It certainly has the potential to change the national conversation about early education,” said Lesaux. “It will be the first look, statewide, at both children and the variety of early education settings.”

The researchers also hope to learn why some advances from early education persist for children while others fade in the first years of elementary school.

“A lot of the focus of other studies is the fadeout of academic skills,” said Tara Chiatovich, the Zaentz Initiative’s research scientist and the study’s manager. “We want to see what happens with gains in social and emotional development, which may tend to persist over time more than academic skills. We also want to see where those gains are maintained or undermined in the early years of elementary school.”

Research suggests that high-quality early education makes an important difference in children’s lives, but only a minority of them benefit from it. Of the 60 percent enrolled in some form of preschool nationwide, only 20 percent attend what would be considered a high-quality program. The features of high-quality early schooling include small group sizes, low adult-to-child ratios, and caregiver competencies.

“Children only get one start. Pay now or pay later.”
— Nonie Lesaux

“Many families don’t have access to a high-quality early education experience for their child,” said Jones. “And we know from decades of research that what really impacts outcomes for children is exposure to high quality. It’s meant to level the playing field, and we’re not there yet.”

The 2006 Study of Early Child Care and Youth Development by the National Institute of Child Health and Human Development found a strong correlation between higher-quality child care and school readiness. Children in high-quality settings were found to have broader vocabularies, coupled with stronger language and early math skills. They also generally were more cooperative than peers in low-quality preschool programs.

“It has been hard to build the political will to fund high-quality preschool experiences,” said Lesaux. “As a country, we’re not in agreement that it’s worth the investment.”

Already in the works

The new study has begun a household survey of parents across Massachusetts to recruit children and families. On a recent afternoon, Yvonne Illich, a field worker with Abt Associates, a research firm partnering with Harvard to conduct the study, took a break from knocking on doors in Lexington, one of her designated work areas.

In addition to launching an academy for professional learning in early childhood education to hone policymakers and practitioners’ expertise, the Zaentz initiative has begun a fellowship program to build a new pipeline of leaders in the field.

Lesaux and Jones hope that the study’s eventual findings will shift the needle in the debate on universal high-quality preschool. With the number of working families growing nationally, child care is a necessity, said Jones, and having more and better options is important.

“We can ignore these opportunities, or we can invest and do something about it by working on quality,” Jones said. “Whether it’s worth it is not the question; it’s how to maximize it.”

By helping to strengthen early education nationally, the study also could help to strengthen families and society in general, said Lesaux.

“In a high-quality preschool, kids are emotionally more regulated, they do better by their behavior, they bring more to interactions with adults, and adults feel good about both working and knowing that their child is safe and healthy,” said Lesaux.

“Children only get one start,” she added. “Pay now or pay later. We don’t need any more data in this country about the effects of a lousy education on the life of an individual and the life of a community and the strength of the society.”