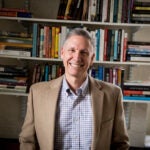 As an international historian, Odd Arne Westad may be best known for bringing a fresh interpretation to the Cold War in which he argues that the era began much earlier and extended much farther than popularly thought.

Those and other themes are explored in detail in a comprehensive new history of the Cold War written by Westad, the S.T. Lee Professor of U.S.-Asia Relations at Harvard, where he teaches at the Kennedy School. He is also a faculty associate at the Weatherhead Center for International Affairs. In “The Cold War,” Westad traces the broad history of the era, including what he sees as its origins and its far-flung effects.

The Gazette spoke to Westad about his perspective on the Cold War, including the forces that brought about and sustained the epic confrontation, and how it continues to reverberate decades after ending.

GAZETTE: What inspired your fascination with the Cold War?

WESTAD: Growing up in Norway would be a part of it. Norway in the ’60s and early ’70s when I grew up was very much a kind of border region with regard to the East-West conflict. It very much felt like that when I was a child. Then when I was just out of college I was doing a lot of work with different kinds of volunteer organizations. I went to Southern Africa to work there for a while with a relief organization dealing with refugees. I did some work in Pakistan a little bit later in the mid-’80s. And that certainly also inspired me in terms of thinking about these issues, because then you got to see the impact of the Cold War in a very different kind of way. Many of the problems these people were coping with had actually been created by the Cold War in a much more direct sense than anything I had experienced where I grew up.

GAZETTE: What led you to decide the time was ripe for a comprehensive history of the era?

WESTAD: There were two main reasons, and they were related. We now have much better access to sources of material for the Cold War era than we ever had before, not just from the United States and Western Europe but also from Eastern Europe and Russia and even China. Even more important, you now have a whole bunch of historians and other social scientists who have worked their way through specific aspects of the Cold War. So any book of this size and scope builds on the work of others, and the timing was ripe now to draw on the work of literally thousands of others who have looked at this in more detail than I am able to do, and to try to single out what is of greatest significance for this era.

GAZETTE: Most people think of the Cold War as the period between the end of World War II and the demise of the Soviet Union in 1991. Yet you argue that it really began decades earlier.

WESTAD: I think the Cold War started in the late 19th century as an ideological conflict between capitalism and socialism. It started with the first global market crisis of the early 1890s. The radicalization of significant parts of the labor movement came out of that crisis, along with the expansion of the United States and Russia as transcontinental empires. And it ends in the early 1990s. With the Soviet Union gone, that ideological element that had its origins way back in the late 19th century is no longer there.

I wanted to look at the Cold War in terms of how it was created, the people who created it, the reason why it was taken so incredibly seriously by people who I think in other circumstances would have thought very differently. That can only be explained by looking at this long time period in which it became a predominant international system. The argument is not that the Cold War determined everything from the late 19th century up to today, but that that ideological conflict influenced those things and was in turn influenced by other things that happened in other areas of human activity and human conflict. So it’s an argument really for trying to understand the Cold War within a broad 20th-century history.

What had changed by the late 1940s was that most of the pretenders for international power were gone by then, and the last two great powers standing were the United States and the Soviet Union. So this ongoing ideological conflict had now become embodied in two states with a global reach.

GAZETTE: You also believe we have tended to understate the broad geographical reach of the Cold War.

WESTAD: I think some of that goes back to my own personal experiences. When you are in countries in Africa or South Asia, and you see the kind of tremendous impact, mostly for the worse, that the Cold War had in these regions, you necessarily become preoccupied with trying to understand this as a global conflict, including the impact it had on people’s lives. Think about Afghanistan, the origins of the conflict there. Think about the conflict in Southern Africa. These conflicts probably would not have happened without the Cold War ideological conflict.

GAZETTE: With all the other sources of division in the 20th century, how did an ideological one become a predominant conflict?

WESTAD: The Cold War was about the future; it was about how the world was going to be organized. It came out of the disasters that had befallen most parts of the world in the early 20th century: two world wars, the Great Depression, the battles over colonialism. The early 20th century was not a good time to be alive in most parts of the world. And the stakes then were immense. I think that explains why people of otherwise sound mind started taking somewhat abstract plans for the future of the world very seriously, to the extent that they were willing to consider blowing up the world in pursuit of these kinds of ideals. That’s what made the Cold War so immensely dangerous. We tend to forget how incredibly threatening the Cold War was as a conflict with two nuclear armed superpowers.

GAZETTE: In some ways, for example with our current tensions with Russia, it almost feels like the Cold War never ended. What explains these continuing reverberations?

WESTAD: There are different things that happened as soon as the Cold War was over, on a local scale. In the Russian case, there was a tremendous sense of loss. This is one of the few things in which the current Russian leader, Vladimir Putin, does have a point, that the Russian experience, with the collapse of the Soviet Union, was more or less disastrous for those people in terms of their living conditions, in terms of their sense of position, of dignity. That caused a feeling of resentment on the Russian side that has given rise to the very confrontational policies that Putin has engaged in over the last decade or so. But it’s not ideological in the same way as what you found during the Cold War.

GAZETTE: The Cold War is often credited with at least offering the world respite from large-scale war. But was that worth the cost? Your book seems to argue no.

WESTAD: That’s right. I think there were many much better ways in which international affairs could be and should have been organized than the Cold War in order to keep the peace after the disastrous first part of the 20th century. The Cold War was a product of the tragedies that went before. People who had gone through hell in the early part of the 20th century were willing to go through enormous sacrifices to achieve a better future, to get to that form of democratic capitalism or socialism. But there were many better ways of organizing the relationship between great powers than doing it through a Cold War kind of framework. Compared to the early 20th century, for most people in the developed world, the Cold War was a period of relative stability. But if you think Korea, if you think Vietnam, if you think the Middle East, it was not a period of great stability. It’s a period of tremendous, sometimes negative forces of change.

GAZETTE: You argue that U.S. leaders lost a golden opportunity to move the world in a more stable and peaceful direction after the collapse of the Soviet Union.

WESTAD: I think many things could have been done better. International institutions through the U.N., but also in other forms, could have been strengthened much more. Far more could have been done to integrate Russia, and for that matter China, into an international framework which was based on some kind of concept of common security. Especially with regard to Russia, it is now becoming pretty clear that expanding NATO in Europe, and for that matter also expanding the European Union, without there being any kind of form in which Russia down the road, very long-term, could become part of these communities — that was a very bad idea.

GAZETTE: Is there any key lesson from the Cold War that could be especially helpful to today’s leaders?

WESTAD: A major lesson is that having big plans for the future, to act upon one’s ideals, is not a bad thing. But one has to consider very carefully what risks one is willing to take in terms of society and in terms of international affairs to achieve these things. What really went wrong during the Cold War was that people were so afraid that the other side would win out that they were willing to do things that they otherwise would not have done, and some of these things were terribly cruel and terribly counterproductive. Not all ideals are so important that you are willing to risk the future of the world in order to achieve them.