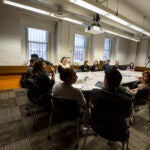 At conference on migration, more questions than answers

To some, it seems obvious that migrants are human beings forced to move, rather than amorphous threats against the state. But little about human beings is simple. On Friday, at the inaugural Mahindra Humanities Center conference on “Migration and the Humanities,” a panel of academics tackled different facets of the many population movements now crisscrossing the globe.

And no surprise: The experts raised more questions than answers as they discussed a complicated problem worsened by adversarial administrations, here and abroad, and the untold suffering of millions.

Before the final talk, on “Survival and Security,” Mahindra Center Director Homi Bhabha said the conference had two goals: The first was to focus on “the ways in which the humanities contribute to the centuries-long process of migration,” he said; the second, “How do the issues that are raised by migration — questions of justice, of citizenship, issues of security, of social and global equity — speak to the foundational paradigms of the humanities?” 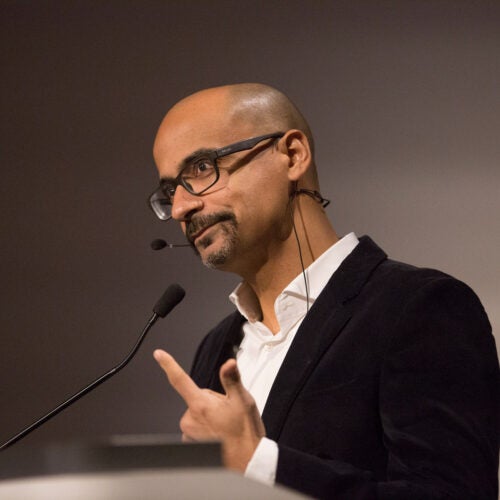 John Hamilton, Harvard’s William R. Kenan Professor of German and Comparative Literature and chair of the department of Germanic Languages and Literature, said any discussion of survival and security brings up “modalities of living in the face of civil unrest and oppression, climate change and cultural displacement.”

“The humanities are well-suited to posing key questions,” Hamilton said. For example: “What is the promise, and what are the limits of living securely? How might security circumvent new, unforeseen threats? How can we be carefree without being careless?”

Inderpal Grewal, professor and chair of women’s, gender, and sexuality studies at Yale, put the focus on the concept of the state, and specifically nation-building. In Grewal’s home region of the Punjab, gender roles and the idea of a “militarized masculinity” have shifted, casting Sikh men first as the ultimate defenders and ideal police, and then, too often, as dangerous insurgents. Even more problematically, Grewal said that some Sikh men are still set up as defenders of a united India at the same time the prime minister is promoting Hindu nationalism.

In the Punjab, a region divided by Pakistan and India, and for the Sikhs, a religious minority, these issues are not new.

“What is new,” Grewal said, “is that migrants are securitized.”

Lisa Lowe, Distinguished Professor of English and Humanities and director of the Center for the Humanities at Tufts University, addressed the way current trends of migration are being framed as crises, a tactic that serves to detach the mass movements from their longstanding political roots.

“We are living in a time of unprecedented migration from countries besieged by war, poverty, and unprecedented coups,” she said. Lowe said The New York Times last week put the number of forcibly displaced at approximately 64 million — “the highest number since World War II.”

However, unlike that post-WWII migration, “contemporary migrants are largely from the global south,” Lowe said. She said most are “food refugees, climate refugees, and asylum seekers,” who seek entrance to — and are viewed as a threat by — the north, which parlays their numbers into a rationale for becoming “Fortress Europe.”

Most migrants are people in crisis, and a refusal to face the underlying causes of their displacement — war, economic inequity, or climate change — compounds the issues they face, she said.

“The migrant is viewed as stateless, homeless, and rights-less,” Lowe said. “Perhaps the migrant is a sign of our difficulty in reading the global present.”

“Migration and the Humanities” was sponsored by the Andrew W. Mellon Foundation.