Daily life and death on the U.S.-Mexico border 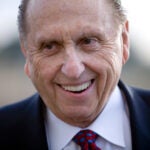 What’s next for the Mormon Church?

Ieva Jusionyte has always been drawn to border tensions. As a graduate student, she went right to the heart of the drug and human smuggling nexus of Puerto Iguazú, a town at the tri-border area of Brazil, Paraguay, and Argentina, to research how the media reported on crime. While there, she developed a deep interest in the experiences of firefighters and rescue workers, and later, in the U.S., trained to become a certified emergency medical technician (EMT), paramedic, and wildland firefighter.

Most recently, Jusionyte embedded herself at the U.S.-Mexico border for a year, using her technical skills to help first responders on both sides of the divide. She reasoned that firefighters and EMTs would face many of the human consequences of national security policy on a daily basis.

In Nogales, Ariz., she volunteered as an EMT with the suburban fire department, responding to 911 calls — whether for a wildfire or for a critically ill or wounded person. Across the border in Nogales, Mexico, she delivered first aid to injured migrants and deportees on a bench in a soup kitchen, which also served as a humanitarian and legal center.

The Weatherhead Center for International Affairs (WCIF) spoke with Jusionyte, an assistant professor of anthropology and of social studies at Harvard, about her work and forthcoming book, “Threshold: Emergency and Rescue on the U.S.-Mexico Border,” which brings together the experiences of the first responders and residents of the local border communities, to take stock of the real-life impact of U.S. national security measures.

WCIF: Do Mexican and U.S. emergency responders on both sides of the border work together?

IEVA JUSIONYTE: At the border, everyday life unfolds on a binational scale. Mexican and American first responders go back and forth regularly and rely on each other to do their jobs. When it comes to saving lives, it is as if the border did not exist for them. Sometimes emergency workers on both sides were family members. For them it is one community split in half by the border wall, which is an inconvenience but does not cut the strong ties that hold the community together. As you go further north, the sentiment toward Mexico is more negative. The fire departments, which are predominantly white, don’t work with Mexican first responders.

JUSIONYTE: Some migrants decide against climbing over the wall and try to cross under it instead, through the drainage tunnels that go under the U.S.-Mexico border. Mexico is uphill, upwind, and upstream from Arizona. Because of how Nogales was haphazardly built, when it starts to rain in Mexico, some streets turn into rivers, and the water overflows the drainage tunnel. There are a lot of situations when people get carried away in these washes, or arroyos, that flood the tunnels. The powerful current sweeps them away from Mexico and carries them to the United States. So emergency responders do binational rescue operations to find people; they begin searching on the Mexican side and continue into the U.S. Sometimes they save a life, but more often they only recover a body further downstream.

In addition to rescues from the wash, emergency responders go out in the desert to find people who are lost and who don’t even know which side of the border they are on when they call 911.

WCIF: After working for a year in this region, you conclude in your forthcoming book that the border wall is being used as a weapon. Can you explain this?

JUSIONYTE: The focus of my work is actually how the terrain is being weaponized to enforce U.S. immigration policies

In 1994, the U.S. Border Patrol created a strategic plan based on the concept of “prevention through deterrence.” The idea was to make the transit corridors in major urban areas, like Nogales, Tijuana-San Diego, or Ciudad Juárez-El Paso, extremely difficult to cross. They militarized the towns by increasing the length and the height of the fence, building surveillance and lighting systems, and really concentrating all the border enforcement there so that the only option would be for migrants to go through remote desert terrain in Arizona or California, or cross the Rio Grande in Texas, which is very dangerous. It’s written in the plan that violence and injuries would increase, and that would deter people from coming.

WCIF: So the desert became part of the deterrence strategy as well?

JUSIONYTE: The farther away you go from the urban areas, there is nothing but desert with mountains and steep ravines. The international boundary there is marked by a four-strand barbed-wire fence and Normandy barriers, which are crisscrossed beams that stop vehicles, yet people can cross there very easily. But it is so far away from settled areas that the natural environment will kill you if you are unprepared. It’s impossible to carry enough water for that kind of journey. Unable to call for help, migrants are also often assaulted; women are frequently raped. Many people do make it across, however, and that’s why they keep coming.

WCIF: What are the most common types of injuries you saw?

I’ve met migrants in the desert who got lost and were trying to find the Border Patrol because they wanted to live. When the smugglers take them across they are told it’s a few hours to Phoenix, when it actually takes three to five days just to reach Tucson. They don’t have maps and there’s no cellphone signal. The people whom I’ve met were very, very dehydrated. Such dehydration can lead to heat stroke, or hyperthermia. More often it results in kidney failure. People who walk in the desert usually have blisters that make it difficult to carry on with the journey. In winter, with temperatures at night falling to below freezing, dehydration makes migrants susceptible to hypothermia. There are snake bites, too, but those are rare. In the desert, most people die due to exposure to extreme heat. But sometimes it is hard to tell; by the time they are finally found, they are reduced to skeletal remains.

WCIF: How do people breach the wall in the urban areas?

JUSIONYTE: Most people pay for a trip “up the ladder” on the Mexican side. Then they need to slide down on the other side and it’s quite high, 20-plus feet.

YouTube is full of videos of drug smugglers with backpacks who slide down very efficiently. But some people climb up and then see that it’s too far to the ground and become afraid to slide. There have been cases where — because the migrants have already paid for the service, or it will be paid by the family members only if the person ends up on the U.S. side of the border — they are forcibly pushed down. If they were pushed, they usually have leg or ankle fractures, and because of the height of the fall, injuries to the spine are also likely. I interviewed a trauma surgeon who has treated many injured migrants. There were some who landed on their heads and died instantly.

WCIF: How has the back-and-forth movement of Mexican migrants changed in the past two decades?

JUSIONYTE: It became more difficult to cross in the mid-1990s, and even more so after 9/11. In 2006, the Secure Fence Act mandated the building of essentially what we have now, 700 miles of border fence, which includes both pedestrian and vehicle barriers.

Prior to this time, many migrants would come to the U.S. to work temporarily just for one agricultural season or perhaps a couple of years in the construction or service industry and then take their earnings back to their hometowns. When they needed more money, perhaps to pay medical bills or to send a child to school, they would return, knowing that U.S. employers were eagerly waiting for cheap migrant labor. It was cyclical migration. But many of those people are now stuck here, on the U.S. side, and not going back because they fear that with security buildup they would never be able to return to the U.S. for another labor season. They stay here, send money back, and, when they can, save enough to pay a “coyote” to bring their spouse or their children to live with them here. I’ve seen many women crossing the border, sometimes with small children, when it used to be primarily young men coming for work.

WCIF: Besides work, what are the other reasons for wanting to cross into the U.S.?

JUSIONYTE: In the last few years, we’ve seen many people from Guatemala, El Salvador, and Honduras fleeing violence and crime. Some of them are asking for asylum, which means that instead of crossing the border illegally, they present themselves to the Border Patrol and wait for their cases to be heard at the court.

WCIF: Has the border strategy been successful, in terms of in deterring Mexican migrants?

JUSIONYTE: Recent data show that there are now more Mexicans leaving the U.S. than coming here. But I’ve always been skeptical about statistics since they are notoriously ineffective at estimating activities, such as unauthorized migration, which depend on avoiding being seen and known by the state.

WCIF: Would you advocate taking the border away? What would happen?

JUSIONYTE: You don’t need a wall or a fence on the border. People have no urge to leave their homeland, to risk their lives in order to live on the margins of society in a foreign country. If given a choice many would prefer to stay in their community. If they could get a temporary work permit, it would enable them to go for a short time and then return home, as long as movement is possible, much like between the countries in the European Union and the U.S. and Canada.

This has been edited for length. To read the full story, visit the Weatherhead Center for International Affairs website.