‘The Space Between Us’ 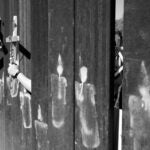 Daily life and death on the U.S.-Mexico border

Understanding geography is fundamental to understanding the world, says Ryan Enos, associate professor of government and a specialist in American politics. People often classify places or neighborhoods simply by who lives in them, he says, and build their allegiances by asking, “Are they one of us?”

In his new book “The Space Between Us,” Enos discusses the strong influence of social geography on psychology, behavior, and politics, and explains how an “us versus them” mentality can be tightly connected to a “here versus there” paradigm of place. The Gazette interviewed Enos, a specialist on race and ethnic politics, about his book and talked about what people might do to overcome the power of geography on the mind in order to increase inclusion in American cities, many of which are increasingly segregated through gentrification.