The Hasty Pudding Theatricals has named actor Mila Kunis the 2018 Woman of the Year.

Kunis, best known for her roles on “That ’70s Show” and “Black Swan,” will receive the traditional pudding pot on Jan. 25, after a parade through Cambridge that will end with a roast at Farkas Hall.

“We could not be more excited to give Mila Kunis our Woman of the Year award! We have been watching her on both the big and small screen since we were young and can’t wait to celebrate her achievements in a truly unique and memorable way,” said Hasty Pudding Theatricals co-producer Annie McCreery.

“Everyone in the company is really looking forward to meeting her. If she’s even half as fun as her character in ‘Bad Moms,’ then we are sure it’s going to be a great time for all!” said co-producer Hannah Needle.

The parade will begin at 2:45 p.m., and the celebratory roast 90 minutes later. A press conference that will be live streamed will follow the presentation, and after that the Hasty Pudding will stage a preview of its 170th production, “Intermission Impossible.” More information will be available on www.facebook.com/thehastypudding, and on Twitter and Instagram @thehastypudding. 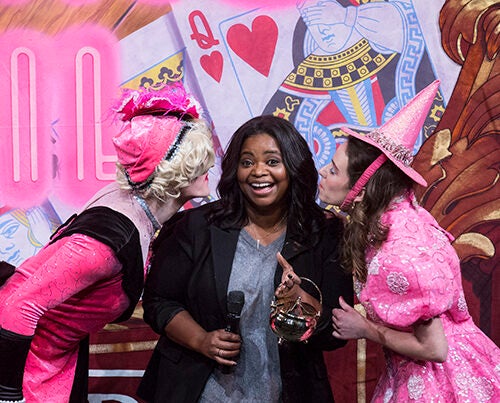 Kunis began her acting career on television with “That ’70s Show” and “Family Guy,” then moved to films with roles in “Jupiter Ascending,” “Oz the Great and Powerful,” “Ted,” “Friends with Benefits,” “Date Night,” “The Book of Eli,” “Extract,” “Forgetting Sarah Marshall,” “Blood Ties,” “Angriest Man in Brooklyn,” “Max Payne,” and “Third Person,” and most recently in “Bad Moms” and its sequel, “Bad Moms Christmas.” Her next movie, “The Spy Who Dumped Me,” will be released in August.

For tickets to “Intermission Impossible,” call 617-495-5205 or order online at www.hastypudding.org/buy- tickets. The show plays Feb. 2‒March 4 at Farkas Hall, 12 Holyoke St., then travels to New York to perform at The Kaye Playhouse at Hunter College March 9‒10, followed by performances on March 14‒16 at Hamilton City Hall in Bermuda.

To live stream the Hasty Pudding Theatricals’ Woman of Year press conference, tune in at 4:30 p.m. to www.facebook.com/thehastypudding.