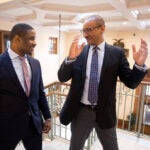 The 2018 Winter Olympic Games in Pyeongchang, South Korea, may prove to be much more than a sporting event. The governments of North and South Korea have agreed to begin formal negotiations and military talks aimed at reducing tensions on the peninsula, while the North has announced its intention to send athletes to the Winter Games for the first time in eight years. World leaders are keeping a close watch on these developments, but whether this case proves to be a successful example of “sports diplomacy” remains to be seen.

Harvard Kennedy School (HKS) spoke with John Park, director of the Korea Working Group at the School’s Belfer Center for Science and International Affairs, to get his perspective on the complex relationship between the two Koreas.

HKS: Why did Kim Jong-un choose this time, a month before the Winter Olympics begin in South Korea, to agree to inter-Korean talks that could defuse tensions with the South?

PARK: Kim Jong-un had mentioned in his New Year’s address that he wished to see South Korea successfully host the Winter Olympics. Kim said he viewed this event as a moment of pride for all Koreans. South Korea’s president, Moon Jae-in, seized on the opportunity and proposed inter-Korean talks on Jan. 9 in the “truce village” of Panmunjom.

North Korea’s participation in the Winter Olympics offers the Kim regime two major benefits. The first is a significant reduction of tensions in the period leading up to and during the games. After the breakneck speed of ballistic missile and nuclear tests in 2017, this pause provides some breathing space before what many analysts expect will be a resumption of tests after the games.

The second is the creation of a buffer. By improving — even temporarily — relations with South Korea, the North is able to have a buffer between itself and the United States. It’s still too early to tell if the inter-Korean talks will grow into a broader engagement, but while they continue, Seoul can make a credible case to Washington to ease off on military pressure and give diplomacy a chance.

HKS: What message does it send to the world for North Korea to have a presence at the Winter Olympics? Can this be an effective use of “sports diplomacy”?

PARK: Former senior U.S. administration officials are concerned that allowing a North Korean delegation to join the Winter Olympics provides the Kim regime a world stage to unveil itself as a formal nuclear weapons state. Specifically, the concern is that the Kim regime could use the Olympics’ prestige to launder its illicit nuclear weapons program and validate itself as a legitimate world power. After locking that recognition in, North Korea is expected to return to building out its nuclear arsenal to a level that it deems to be sufficient as a minimal nuclear deterrent.

On the other hand, many Korea watchers are hopeful that sports diplomacy will provide a face-saving way for the two Koreas to launch a robust dialogue channel. This could start with practical matters, such as the logistical planning for bringing a North Korean delegation to Pyeongchang. The channel would ideally grow to cover sustained military-to-military talks and reunions of divided families from the Korean War period. This diplomatic momentum would then be applied to exploring a potential U.S.-North Korea meeting to work out the details of a package deal, initially centered on a broader freeze.

HKS: Will North Korea’s participation in the Olympics help ease the pressure of economic sanctions?

PARK: The immediate challenge for the Moon Jae-in government is to pay for agreed expenses for the North Korean delegation’s travel and accommodations. Some of these payments could violate sanctions currently imposed on North Korea — specifically, measures that ban the provision of cash or financial assets to the regime. The Moon government is seeking an interim arrangement to address this issue.

Easing sanctions is a different matter, as it would require close coordination with the U.N. Security Council, particularly the U.S. The conditions under which these sanctions resolutions were passed are directly linked to proscribed nuclear and ballistic missile testing activities. So Washington’s position is likely to be that any easing of sanctions would only be possible if the Kim regime commits to denuclearization.

HKS: Do you feel that these recent developments will move North and South Korea closer toward a nuclear deal?

PARK: While the initial inter-Korean talks are a welcome respite from the harrowing escalation of tensions in 2017, the real test is what happens after the Winter Olympics. We’ll either see the continuation of talks in some form, or a resumption of what technical experts believe to be the final stages of North Korea demonstrating a full nuclear weapons capability that can reliably reach the continental United States.

HKS: What role should the United States be playing to help encourage the easing of tensions between the North and the South?

PARK: President Moon was able to secure an agreement with President Trump to postpone U.S.-South Korean military exercises during the Winter Olympics. That arrangement is credited as a major factor in facilitating the inter-Korean talks on Jan. 9. To keep the momentum going, China is calling on the core countries — the U.S., North Korea, and South Korea — to focus on implementing its dual-freeze proposal. Rather than any one country’s role being viewed as the most critical, the dual freeze calls for collective simultaneous action whereby North Korea would freeze its nuclear and ballistic missile development activities, and the U.S. and South Korea would freeze their annual joint military exercises. The Chinese and South Koreans are especially keen to leverage the postponement of military exercises as a catalyst for a larger diplomatic engagement process.

However, what’s new in the current phase of the ongoing North Korean nuclear crisis is the Kim regime’s early stage capability to put the continental U.S. at risk. Following significant advancements with landmark intercontinental ballistic missile and nuclear tests in 2017, North Korea is no longer viewed mainly as a threat to U.S. allies and interests in Northeast Asia. If diplomatic efforts collapse, we’re likely to see a dramatic increase in U.S. military pressure on North Korea, with the goal of compelling the regime to rapidly denuclearize.

This article originally appeared on the Harvard Kennedy School website.