When the doctor’s away 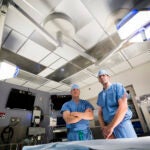 When you’re hospitalized and the regular doctor is out sick, on vacation, or at a conference, you’re increasingly likely to receive treatment not from the doctor’s colleague or another staff physician but by an outsider hired to fill in, like a substitute school teacher.

The trend, a multibillion-dollar industry, is fueled by physician staffing shortages and shifting employment patterns.

But do these temps — so-called locum tenens physicians — provide the same level of care as the doctors for whom they’re filling in?  The answer appears to be yes, at least when it comes to death rates in the month following treatment, according to research led by Harvard Medical School (HMS) and published Dec. 5 in the Journal of the American Medical Association.

The findings, based on a review of millions of Medicare hospitalization records, provide the first insights into this booming business. The results show that patients treated by substitute doctors and regular hospital staffers had similar death rates in the 30 days following hospitalization.

Yet the researchers caution there were some small but statistically significant differences in other measures. Patients treated by substitute physicians had somewhat higher spending and slightly longer hospitalizations.

“Our findings so far are reassuring, but some of the trends we found demand that we look more closely at how the system works in a more granular way,” said study senior author Anupam Jena, the Ruth L. Newhouse Associate Professor of Health Care Policy at HMS.

Temporary docs might pick up shifts at a number of hospitals around a single metropolitan area, or they might travel across the country to work in a rural hospital far from their homes, Jena explained.

These doctors generally do not have any relationship with their patients, are not familiar with the local community, and may never have worked with the hospital’s electronic health records system, staff, or network of local facilities to which patients may be discharged after hospitalization, the researchers said.

The researchers analyzed 1.8 million Medicare hospital admissions that took place between 2009 and 2014, using algorithms that allowed the analysts to compare the results for doctors working with similar patients at similar hospitals. Nearly 40,000 of the 1.8 million admissions received care from substitute doctors. In that time frame, one of 10 physicians was replaced by a substitute doctor.

However, when the researchers analyzed various subgroups within the overall sample, they noticed some worrisome trends. Hospitals that used substitute physicians less often had somewhat worse patient mortality outcomes. Daniel Blumenthal, HMS instructor in medicine at Massachusetts General Hospital and the study’s first author, said the finding might be due to the geographic remoteness of these hospitals, to limited financial resources, or to a lack of robust support systems to help temporary doctors plug into the hospitals’ systems.

“As the marketplace shifts and employment patterns fluctuate, we owe it to our patients to make sure that the way we cover for doctors who are out of the office is safe and effective,” Blumenthal said.

Co-authors of the study included Andrew Olenski of Columbia University and Yusuke Tsugawa of the University of California, Los Angeles.

This study was supported by funding from the Office of the Director, National Institutes of Health.