Storytelling as a global force 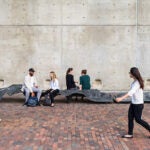 Martin Puchner’s new book, “The Written World: The Power of Stories to Shape People, History, Civilization,” begins in space with a moment from the dramatic Apollo 8 mission. More than 200,000 miles from Earth, astronauts connected with their audience of 500 million by reading the first verses of Genesis. Puchner was drawn to the tale for its powerful pairing of traditional storytelling and technology, a theme at the heart of “Essential Works in World Literature,” the Humanities 12 course he teaches with David Damrosch.

Puchner is the Byron and Anita Wien Professor of Drama and of English and Comparative Literature, chair of Theater, Dance & Media, and editor of the “Norton Anthology of World Literature.” He told us about books that changed his life, heading south for research, and what Donald Trump and Barack Obama’s biographies have in common.

The dean of Arts and Humanities and the English professor chat about the literature that has shaped civilization.

GAZETTE: “The Written World” came out of your co-teaching Humanities 12 and the HarvardX course on the same topic. Was the book a natural extension of the courses?

PUCHNER: The study of literature is often so specialized that it’s very hard to get the big picture. The more I thought about it and I saw this big picture, I was captivated. I couldn’t find books that captured the history of literature on this scale. So I said, “I guess I’ll write it myself.”

GAZETTE: Your research took you around the globe, but also to several Southern states, including Georgia and Alabama. Why there?

PUCHNER: The second origin of the book was when I started to edit the “Norton Anthology of World Literature” about 12 years ago. It forced me out of my own specialty and to think for the first time about the big picture. It so happens that a lot of the biggest adopters of this anthology are in the South, often small, rural universities. Why are there so many more world literature courses being taught in the South? I think because during the canon wars, the coastal elite universities gave up on their great big book courses. These courses were often focused on Western literature and with very few women writers. Out of a conservatism, the South held on to these courses, but transformed them, from Western civilization courses to the world literature courses we have today. The result is that schools with robust world lit courses are those Southern universities. It’s been a real education for me to get to know an aspect of higher American education that I wouldn’t get to know otherwise. These programs are crucial because teachers are sometimes teaching students who haven’t left their state, who don’t have a passport, but they can convey something about the world through literature.

GAZETTE: What books changed your life?

PUCHNER: I wasn’t an avid reader. When I was growing up, literature was valued, but I was not particularly interested in it. It crept up on me, maybe around 15 or 16, not sooner. I remember some experiences, like reading “Lord of the Rings” several times. It made an impression on me, but more importantly it created an entire world. The other signature reading moment was when I found myself in northern Greece in my early 20s. I was at a summer school in Thessaloniki, spending a week on Mount Athos. It was a completely strange place belonging to the Greek Orthodox Church and closed to tourists and women. It was where you went if you wanted to convert to the Orthodox Church. I found a way in and I had brought Joyce’s “Ulysses,” a book the church didn’t like. I was in a medieval “The Name of the Rose” kind of world, reading it secretly. That experience me made me switch from philosophy to literature for the rest of my life.

GAZETTE: Paper and printing are at the heart of  “The Written World.” And yet 20th-century poet Anna Akhmatova’s story was captivating because she fought to keep her work oral as a way to protect it from totalitarian Russia.

PUCHNER: Spoken storytelling continues to feed literature to this day in a really important way. Akhmatova was crucial for me, but so was the West African “The Epic of Sundiata,” which was transmitted orally for centuries. It was only written down in the 20th century. These two are important in the overall story of technology and its influence on literature. It’s not just improved technology that made a difference. It’s who owned and controlled it. The two authors were good reminders that as excited as I got about the advantages of paper over papyrus and print over handwritten books, it was always a question of how these technologies were used, and their unintended consequences. I just talked to a librarian about current technology. It’s so hard to preserve electronic email because we don’t know if we will be able to read these formats in 20 years, The obsolescence of these electronic formats is staggering.

GAZETTE: How does storytelling fit into the national conversation?

PUCHNER: Look at the presidencies of Donald Trump and Barack Obama. It has struck me that they have, in both cases, come to the attention of the general public through their autobiographies (“Dreams from My Father” and “The Art of the Deal”). Both men managed to forge these stories about their lives that took them to the White House. These two books are quite different, but they are both variants of the American type of autobiography — a combination of a search for identity and professional achievement.