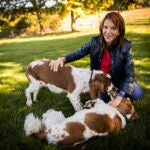 For many students, attending Harvard is tied to financial help; tax plan could undercut that and research too

Sarah Winn’s dream of becoming a teacher came true at Harvard, which she attended with help from the University’s generous financial aid program. She is far from alone. Last year Harvard set a financial aid record, distributing $414 million in grant assistance to students across the University.

“There’s no way I would have been able to go to Harvard if it was not for financial aid. Finances were a huge factor in my college decision,” said Winn ’14, who now teaches English to 10th-graders at Cristo Rey Philadelphia, a private high school serving low-income students. In college, Winn also became a certified teacher through Harvard’s Undergraduate Teacher Education Program, an initiative, like financial aid, that is backed in part by the University’s endowment.

But officials in higher education fear that success stories such as Winn’s could be threatened by congressional lawmakers’ plans to overhaul the federal tax code. In an effort to pay for $1.5 trillion in proposed tax cuts included in a bill unveiled Thursday in the U.S. House, Republican leaders proposed a 1.4 percent tax on the charitable endowment earnings of private universities that have endowments larger than $100,000 per student.

Education experts argue that such a tax proposal threatens both financial aid and research and reflects a common misunderstanding of how charities and endowments work. They say the tax  would undercut critical research funding and weaken key financial aid programs that support students for whom college would otherwise be unaffordable. Annual proceeds from Harvard’s endowment, for example, form the largest source of revenue that funds the University’s operations — from undergraduate financial aid to faculty salaries and labs, thereby enabling Harvard to achieve its teaching and research mission.

Experts say that endowments, instead of being giant checking accounts in which nonprofit institutions hoard cash, are made up of hundreds or thousands of individual gifts, the value of which is required to be maintained at inflation-adjusted levels in perpetuity. Universities like Harvard only can spend a portion of the annual investment proceeds, and only on the purposes designated by the original donors. Universities are public charities and are tax-exempt because of their educational mission. The congressional proposal for the first time would impose taxes on an operating charity.

Experts across the country voiced their concern over the proposed tax.

Mary Sue Coleman, president of the Association of American Universities, which represents 62 leading U.S. research universities, praised congressional efforts to simplify the nation’s tax code but warned of the harm that this new tax on educational institutions could cause.

“In the current environment of low returns, Harvard’s endowment is fully stretched supporting the teaching and research mission of the University and meeting the financial needs of our students,” said John Y. Campbell, Harvard’s Morton L. and Carole S. Olshan Professor of Economics. “Taxation of endowments would jeopardize those activities, both here and at other universities.”

“Taxing college and university endowments would have devastating effects on students and faculty,” said Faust. “Harvard’s endowment is what fuels our excellence, our affordability for students of modest means, our commitment to discovery, and our impact in the world. This measure would disadvantage universities in the charitable sector, and — in targeting universities — weaken the nation’s strongest contributors to medical cures, economic innovation, job creation, scholarship, and access to higher education for students of all economic backgrounds who will shape our future.

“Harvard’s endowment is not locked away in some chest,” Faust added. “It is at work in the world. Endowment proceeds fund nearly 40 percent of the University’s operations, with nearly a quarter spent directly on financial aid. The balance funds labs, professors, and libraries — and helps enhance affordability for students. A tax on university endowments is really a tax on the people who make up these institutions and the work they do: donors, alumni, staff, students, and faculty. We will continue to work assiduously to make clear why this would be such a destructive measure.”

Much of the research conducted at Harvard is aimed at the world’s most-pressing challenges. Its endowment, for example, is an important source of funding for the new Data Science Initiative, a University-wide program that supports efforts in which researchers produce and analyze information, including massive data sets generated from science, engineering, social sciences, and medicine. By applying the theory and practice of statistics and computer science, the initiative aims to make processing and understanding vast quantities of data possible.

More than half of Harvard research involves the life sciences and carries important implications for the health and future of many people, including through advances in therapeutics and the ability to treat diseases, said McCullough. He said taxing the endowment would add “another hindrance to people’s ability to do their research.”

“It means there would be fewer people working on these problems, and the pace at which discovery is made will be slowed. One could argue that that’s fine, but on the other hand if you look at what other countries are doing, they are doubling down on their research support. China in particular is becoming increasingly more competitive because its investment in research and development has skyrocketed, while the United States has been slowly decreasing. That translates into discovery, which then translates into economic and technological competitiveness for our country.”

Harvard alumni have played a critical role in helping to build the University’s endowment. In 2014, philanthropist Kenneth Griffin ’89 gave $150 million to Harvard, principally to support its financial aid program. That gift benefits hundreds of undergraduates every year.

“It is extremely important that students of all backgrounds have the opportunity to challenge themselves, learn to solve complex problems, and ultimately better our world,” Griffin told the Gazette in 2014. “My goal with this gift is to help ensure that Harvard’s need-blind admission policy continues, and that our nation’s best and brightest have continued access to this outstanding institution.” Griffin described the gift as “an investment in the next generation of leaders as we continue to break down barriers to an outstanding education.”

Looking back at her own path through Harvard to teaching, Winn said realizing that she could graduate without a mass of debt influenced her career choice, and she now can pass along her good fortune to others.

“Certainly I would have been forced to think more critically or make different decisions about what teaching jobs I was able to look for and accept if I had more loans than I do now,” said Winn. “It would have narrowed places that I could have applied for teaching jobs, and potentially the ability to teach.”

Harvard’s financial aid “was extremely important and a huge benefit to my life.”