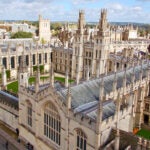 The lives of Harvard’s Rhodes

Growing up in the mostly white city of Lethbridge in southern Alberta, Canada, Julian SpearChief-Morris often felt out of place.

With an African-American father from Los Angeles and a Canadian mother from the Blood reserve, one of the four indigenous nations that make up the Blackfoot Confederacy, SpearChief-Morris found it hard to feel completely at home either at the reserve or in the city where he was raised.

“It was pretty difficult, especially in high school, because there weren’t many people who looked like me, or came from a background like mine,” he recalled. “I often felt I didn’t fit in.”

But after graduating from a local college and coming to Harvard Law School (HLS), with its diverse student body, SpearChief-Morris felt right at home. And when he was admitted to the Harvard Legal Aid Bureau, one of the three honor societies at the School, he found a family. It’s a place that SpearChief-Morris has made his own.

In his last year at the School, SpearChief-Morris has left a mark in the storied history of the organization, which was founded in 1913 to provide legal services to low-income clients in the Boston area.

He is the first indigenous student to lead the bureau.

Like the Harvard Law Review and the Board of Student Advisers, the bureau is a highly selective organization that has featured among its members former first lady Michelle Obama, J.D. ’88, former Massachusetts Gov. Deval Patrick ’78, J.D. ’82, and former Attorney General Loretta Lynch ’81, J.D. ’84, all of whom represented low-income clients before the courts.

A Massachusetts Supreme Judicial Court rule allows student attorneys to work under the supervision of clinical instructors. As a student attorney with the bureau, SpearChief-Morris has taken on a home-removal case, child-support disputes, custody matters, and eviction proceedings.

As the bureau’s president, SpearChief-Morris worked to build bridges with other student organizations on campus. Esme Caramello ’94, J.D.’ 99, the bureau’s faculty director and clinical professor of law, praised him.

“Julian is brilliant, organized, and mission-driven,” Caramello said in an email. “Because of his personal experience, his relationships with other indigenous leaders and people, and his own careful study and reflection, he brings an important sensitivity to the way that historic injustices manifest in modern legal problems. He also helps us see our clients and our mission in ways that are more complex and that transcend whatever might be in the headlines at any particular time.”

His leadership is a source of pride for indigenous students at Harvard, said Leilani Doktor, co-president of the Native American Law Students Association. SpearChief-Morris was co-president of the association last year, and during his term made unique contributions, said Doktor. “He spearheaded initiatives to collaborate with other student organizations, build community for native students, and infuse public service into our everyday lives,” she said.

For SpearChief-Morris, being at the helm of the bureau is both a privilege and a responsibility. His stint there, he said, is a continuation of the work he did as a guidance counselor in his hometown’s school district, where he advised indigenous students. He finds similarities between populations mired in poverty and marginalization.

“Marginalized individuals have a lot of in common, regardless of where they are,” said SpearChief-Morris. “We serve low-income individuals in Boston, and the majority are people of color. In the Blood reserve, which is my family’s reserve, unfortunately there are a lot of poverty issues. I see a lot of parallels between what happens there and what we see in Boston.”

Dealing with indigenous students at home slightly younger than he was as they endeavored to earn high school diplomas or equivalency degrees, find jobs, or apply to colleges helped steer SpearChief-Morris’ life in a new direction. It was that experience that drove him to apply to law school, in hopes of deepening his understanding of the roots of social inequality.

“The kids I was helping were 16, 17 years old, and some were 19, 20 years old, and they were working hard to better themselves, but oftentimes they were stuck,” said SpearChief-Morris, who graduated from the University of Lethbridge with an urban and regional studies degree in 2013.

“Working with them showed me that there were deep-seated issues that I didn’t know how to address at the time,” he said, “and it also underlined the fact that I didn’t have all the tools to make the impact I wanted to make.”

After more than two years at HLS, SpearChief-Morris said he has learned how the law can level the playing field for everyone and the role it plays in strengthening communities.

“The law is one piece of the puzzle to build strong communities,” he said. “My goal was to be better prepared to change the things that I wanted to change.”

After he graduates in May, SpearChief-Morris plans to work at a law firm in Washington, D.C., as part of the Native American Practice Group. But his long-term plan is to go back to southern Alberta to keep working to improve the living conditions of aboriginal communities.

“I don’t want to be a practicing attorney for the rest of my life,” he said, “I may start an organization or work in the government, but wherever I end up, I plan to work to strengthen my community.”