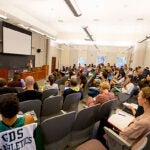 It’s been an eventful few months for Stephanie Burt. The English professor began the summer by announcing her transition to female. Two months later, The Nation named her co-poetry editor with Carmen Giménez Smith. In October, Burt published “Advice from the Lights,” a book of poems about memory, gender, and identity, and her last as Stephen. She will speak Thursday at Harvard Hillel as part of the FAS Diversity Dialogues series.

GAZETTE: In 2012, you published an essay in Virginia Quarterly Review saying, “I often think that I would rather have been a woman,” but adding, “I’m sure that I won’t try to become one.” What changed?

BURT: At the time I didn’t think I could transition, and I found out I could. I ran an experiment and, as anyone in an experimental discipline knows, the results you get aren’t necessarily the ones you expect to get. Replicability is very important if you’re a scientist. I ran that experiment every day for several years, and I varied the inputs and got some comprehensive results and I shared the results with my trusted collaborator, to whom I am married. As scientific research can do, it produced an engineering objective and steps to take to achieve that objective.

It turned out, this year, that I was ready to transition, and it was a really good idea for me to do that. I always knew I was a girl inside, but didn’t realize it was both possible and wise to do a social and medical transition. And it’s great. As you can tell, it was something I was afraid to do and didn’t want to do unless I really had to. I wasn’t ready before and I don’t regret waiting.

One of the unexpected benefits of having waited so long — and therefore of coming out as trans when I’m already in an position of institutional power — is that I get an obvious chance to serve as a visible role model. That service does political and social work. It’s not as if I could change who’s in the White House or on the Supreme Court, but there is a lot of research that says people become more accepting and more comfortable with an identity that’s new to them or strange to them or historically disparaged if they actually know people who have those identities in their daily life.

GAZETTE: You also have a new book of poems, one you’ve described as “a childhood book.” How so?

BURT: I’ve been thinking about how to represent the idea of adolescence in poetry for a while. There are a bunch of real childhood memories in there. There are invented girlhood memories in there, and a lot of talking inanimate objects and arthropods: insects, a block of ice, a cicada, a pet fish, a hermit crab. The end of the book has a different kind of focus. There’s a lot of open space there; it has more public poems that react to the potential collapse of civil society, to the rise of Trumpism.

These poems also react to the economic and geographic privilege that has always been part of my life. I’m a trans lady and a poetry teacher, but I’m also a product of a Washington, D.C., bourgeois upbringing. And of Harvard. We’re all a lot of things; if you think you’re only one thing you’re kidding yourself. I’ve tried to find the right forums for some of the things I am for quite a long time.

GAZETTE: You mentioned these invented girlhood poems. Were these your unlived or imagined life as a teenage girl?

BURT: This was the girl I didn’t get to be. I discovered that I could write those poems up to my, or her, senior year of high school. Did she stop having a life she could imagine, or did I not understand how to be a woman the way I thought I could be a girl? Those poems became a chapbook that Rain Taxi Editions was good enough to publish in 2015. Thanks to that chapbook, I got encouraging feedback while I was putting together the rest of the book.

GAZETTE: Congratulations on your appointment at The Nation. What do you see as the opportunity and challenge of having such a public-facing editorial role?

BURT: Poetry isn’t going to tell [readers] how to best, most efficiently use their time and money to make the collapse of the country less likely. Practical, what-do-I-do-next instruction doesn’t come through poetry. Calling on poetry to somehow fix democracy or explain what to do is kind of like calling a cellist to fix your drain. We need election security, candidates for local office, and more investigative journalists and union organizers. We need all that stuff and none of that is poetry, but poetry can do a lot of things. It can explain you to yourself. It can show you your feelings, or change your feelings. Poetry can give you a sense of solidarity or alienation or a sense of being in history or being apart of history. Some of what we publish and will publish in The Nation is not directly pegged to headline news, but some will be. We’re looking for poems about how not to rig an election, but also poems about asparagus and cellists and plumbers.

GAZETTE: Does the desire to tell your story at the Diversity Dialogue series come from a sense of responsibility as someone in a unique position as a trans woman professor?

BURT: I feel like there are probably trans people in other departments, but I assume that some aren’t out — some are stealth. I don’t know that I’m unique. I know I’m a visible woman on the Harvard faculty who has tenure. My professional responsibilities and my teaching and writing are, primarily, about poetry, but they include queer visibility and culture. I do have visibility and security here and I hope I can use that for good.

I also think I was doing some good things before. If you’re trans and you can’t transition, you can try to go on living your life, and doing a lot of the other things you want to do. For some, it is overwhelmingly terrible. For some of us, the experience of not transitioning, of waking up every day in the wrong gender, is just overwhelmingly terrible, and paralyzing. For a lot of us, though, myself included, it’s more like, “Oh well, I guess I have to go through the day being socially read wrong. I’m in a body I wasn’t supposed to have. My body and the social cues around it make me feel awkward and sad when I think about them. I’m going to focus on other things and have a mostly good day.” It was like walking around with a mousetrap attached to my leg. Not a bear trap, a mousetrap. A big mousetrap. Then I turned 46, and was like, “Oh there’s a way to remove it and it no longer hurts.” It’s just better now.

Seating is limited for Burt’s talk at 10 a.m. Thursday at Harvard Hillel. For information, visit the event page.