For Faludi, a rare internal gaze 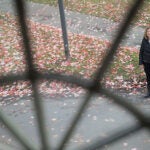 Journalist and feminist, used to chronicling others, writes about relationship with her gender-transitioned father

Susan Faludi ’81, RI ’09, is an expert on secrets, but she never meant to be. Speaking dismissively of the “selfie culture,” the Pulitzer-winning journalist and author of “In the Darkroom,” which centers on her relationship with her gender-transitioned father, had little interest in writing a traditional memoir.

“I’m suspicious of the privileging of the personal,” she said during a phone conversation in advance of her participation in “Hidden in Plain Sight: Family Secrets and American History,” a Schlesinger Library event at the Radcliffe Institute for Advanced Study to be held Thursday at 4:15 p.m. in the Knafel Center. “It worries me that we are living in a period where identity has been defined in a fairly egocentric way.”

To be moderated by Annette Gordon-Reed, J.D. ’84, RI ’16, Charles Warren Professor of American Legal History at Harvard Law School and professor of history at Harvard University, the panel discussion will also include Gail Lumet Buckley ’59, author of “The Black Calhouns: From Civil War to Civil Rights with One African American Family”; Alice Echols, Barbra Streisand Professor of Contemporary Gender Studies and professor of history and gender studies at the University of Southern California; and Alex Wagner, author of the forthcoming “Stories We Tell Ourselves.”

Writing about her evolving relationship with her father, who had long been a guarded and at times hostile parent, according to Faludi, was a new experience for her.

“I’m not somebody who has ever written personally,” she said. “What I love are the memoirs that connect personal experience with a larger world.”

Her father’s experience certainly brought the journalist and former Crimson editor into a burgeoning global conversation about gender. But Faludi is quick to point out that her father’s concerns — and hers with her parent — were complicated. In addition to her gender identity, Faludi’s father had also hidden his (and eventually her) Jewishness during the Holocaust in Hungary. “If anything my father was an identity Zelig,” the author explained, “and passed through a series of identity crises.”

One strange later conflict came about in how her father experienced femininity, pursuing — at least at first — a much more stereotypical style than Faludi did. “Certainly when my father was taking all of the most clichéd ideas of femininity and throwing them back in my face, I was not greatly appreciative,” said Faludi. “Ultimately, I saw my father and I had similar life paths of pushing up against constraints in gender,” she notes now, adding that the insights in her book are “more about identity than gender.”

Still, even as she acknowledged that her political interests had been shaped by her family experience, Faludi had to face down an initial reluctance to write such a personal work — a reluctance, she said, that has been dispelled. “To just put that out there was a great relief,” she said.

Indeed, sharing secrets can also be a political act. Citing her father’s struggle, Faludi referred to the current backlash against transgender rights and also to the breakthroughs in visibility. “Everybody knows what a trans woman or a trans man is now,” she said.

Reflecting on the recent #metoo movement, she found another connection. “It is interesting that the panel is happening at a time when we’ve kind of had a massive reveal by women on the sexual harassment and sexual assault front,” she said. “It seems we’re in a period where women are doing an awful lot of disclosure of male predatory behavior that only a short while ago women assumed there would be a coded silence about.

“It’s really interesting about the refusal to feel shame,” she continued. “Shame is the reason we all keep our mouths shut, isn’t it? That has a lot to do with the advances of feminism. Women are no longer willing to say, ‘I should be ashamed because I was attacked, I was raped, I was grabbed.’ Women are no longer willing to take on the shame that should be attached to the assailant.”

These battles, she warned, are far from over. In fact, Faludi’s next work is likely to be a return to an old project “about a radical environmental feminist,” she said, specifically, “about the difficulty in sustaining a left-wing movement, which seems relevant today.”