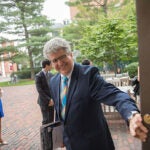 The U.S. needs to remain an active leader in addressing global health problems, both for its own sake and for that of populations around the world, according to speakers at a Harvard symposium Thursday, who also urged new strategies to boost those broad-based efforts.

“We need to stay engaged,” said Michael H. Merson, the Wolfgang Joklik Professor of Global Health and Vice President and Vice Provost for Global Affairs at Duke University, the keynote speaker at a forum at the T.H. Chan School of Public Health held as part of Worldwide Week at Harvard.

“The health and well-being of other countries affects the health, safety, and economic security of Americans,” said Merson, summarizing one conclusion of a new national report he helped create on the nation’s role in global health. “Taking a more proactive and systematic approach will make the U.S. government’s global health enterprise more efficient and cost-effective.”

In welcoming remarks, Wafaie Fawzi, chair of the Department of Global Health and Population, noted the progress that has been made in addressing international health, including the rise in life expectancy attributable to such factors as investments in new vaccines and drugs.

“But there are also many notable threats that face us today,” he said, “from the unfinished agenda addressing undernutrition and maternal child deaths, particularly in Africa, to the rising tide [of noncommunicable diseases] globally and the challenges associated with urbanization, population increases, and climate change.”

Merson, who served on a committee that wrote the global health report for the National Academies of Sciences, Engineering, and Medicine, was introduced by Mark Elliott, vice provost of international affairs and Mark Schwartz Professor of Chinese and Inner Asian History. Merson said the report lists four priority issues: achieving global health security, addressing threats from communicable diseases, saving and improving the lives of women and children, and promoting cardiovascular health and preventing cancer.

Outbreaks of communicable diseases such as Ebola and cholera in the last decade constitute a key global health security issue, the report found.

“What the committee was most concerned about … was an influenza outbreak, a new mutant strain to which there is absolutely no antibody in the world. I don’t know what’s going to happen. This is just to tell you that we’re sure there’s going to be a ‘next,’” said Merson, whose committee said the U.S. needs “a new international response framework for public health emergencies.”

Regarding communicable diseases, Merson said that progress has been made against AIDS and malaria, but that tuberculosis has been “essentially neglected.” Along with continued AIDS funding, his group recommends “that a global assessment be made and that a new plan be developed if we are going to get serious about TB,” Merson said.

The committee urged continued investment in programs to enhance the health of women and children, and a new approach that seeks to ensure that people not only survive but thrive through better nutrition, education, and other supportive efforts, Merson said.

To combat noncommunicable ailments such as cardiovascular disease, the group called for prioritizing “what’s doable now at a reasonable cost, and that can be done globally, and the obvious one for us was high blood pressure.” He said the group believes that focusing on behavioral factors such as smoking and alcohol use is also key.

Lisa Berkman, director of the Harvard Center for Population and Development Studies, said that addressing global health completely requires dealing with such larger issues as poverty, inequality, and the “fraying of society” that is reflected in the violence and mass migration occurring in so many nations.

Berkman said one path to solutions is to have governments incorporate public health into all their policies, from labor to transportation to education. “We need to think about what’s going to lift people at the bottom, not just lifting people at the top,” she said.

He said the U.S. global anti-AIDS program has succeeded because it integrates “prevention and care aggressively in a transnational way.”

Ashish Jha, director of the Harvard Global Health Institute, said the U.S. investment in global technologies has been a significant contributor to international health, but that the U.S. also needs to share its expertise in systems thinking and institutional capacity.

With issues such as climate change emerging as key public health concerns as well, he said that global health needs to be addressed now in a more multidisciplinary way. “We have to have a much broader and a much bigger tent in terms of who we invite into the global health community,” Jha said.