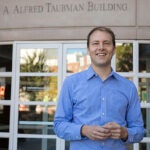 The prosperity gospel has gained an important foothold in U.S. politics, panelists say

The prosperity gospel, a strain of Christian belief that links faith, positive thinking, and material wealth, is finding a foothold in American politics with the rise of President Trump, according to panelists at an Institute of Politics’ John F. Kennedy Jr. Forum at the Harvard Kennedy School on Monday.

Trump’s ability to tap into some of the themes of prosperity theology — in particular through his claim to be a self-made businessman — contributed to his political success, and in turn is helping elevate that strain of Christian thinking, the speakers said.

“[Trump’s backers] don’t care how he made his money, they don’t care what he does with his money,” said author and journalist Sally Quinn. “They admire him for the fact that he has made all of his money and that he has never given up. He’s brought himself to the top, and somehow if he can do it — it’s like the power of positive thinking — he’s telling them they can do it, too.”

Joining Quinn on the panel were E.J. Dionne Jr., a Washington Post opinion writer and William H. Bloomberg Visiting Professor at the Harvard Divinity School, and the Rev. Jonathan L. Walton, Professor of Christian Morals and Pusey Minister in the Memorial Church, and a professor of religion and society at the Divinity School.

The forum was moderated by Nicco Mele, lecturer in public policy at the Kennedy School and director of its Shorenstein Center on Media, Politics and Public Policy.

Walton said the prosperity gospel, also known as the word of faith movement, emerged after World War II. It combines positive thinking and the idea of sowing and reaping to create a view of the Bible “as a contract between believers and God, where God wants to unleash infinite wealth and health to those who have enough faith.”

“Even dating back to the 18th century, you see some variant of this prosperity gospel in American Protestantism … a kind of unbridled sense of aspiration and accumulation,” Walton said.

Quinn agreed that hard work and striving for prosperity are part of the American tradition, but she suggested that some prosperity theology leaders “have veered off into an unfortunate direction,” and voiced concern about their growing influence. When she began her own website, OnFaith, a decade ago, the prosperity gospel was disparaged by many people, including traditional evangelicals. But Trump, first on the campaign trail and now as president, has sought out as advisors people from the prosperity gospel movement, giving it new prominence.

“He has brought them into the White House and has given them a stature and a position that they never had,” she said. “In some ways they are looking at this and saying … ‘God did this for us, and therefore he blesses us, and we must be his favorites.’”

Quinn said some untrue statements by Trump actually reflect an exercise in positive thinking. “He knows perfectly well that there were not more people at [his inauguration] than at any other inauguration. But if he says it and he thinks positively, maybe it will turn out that it was true.”

Walton, who has studied televangelists, said Trump takes their style to politics. “He knows how to put on a show. He knows how to work the cameras.” He said Trump’s appeal also reflects a trend that has seen many prosperity gospel preachers try to model themselves on successful businessmen, even referring to themselves as CEOs.

Dionne said it was important to recognize that prosperity theology is not just a movement of poor people aspiring for wealth, but also appeals to those who are already affluent.

“If you are successful, you must be blessed. And then at the other end of the class structure are folks who desperately need to be blessed,” he said. While he called the prosperity gospel “deeply flawed,” Dionne cautioned against “conflating too many forms of enthusiastic religion together,” noting that the evangelical tradition comes from a democratic spirit, and often a progressive one.

Dionne said that for much of American history, mainline Protestantism provided “a kind of civic glue for the country. … There was a shared language, a shared set of commitments.”

“We got rid of that for good reason. It was white, it wasn’t multicultural,” he said. “But in losing that civic glue, I think we’ve been struggling for 60 years to remix something that might work.”

Quinn agreed. “We all used to feel as though we were in this one big community where we all were supposed to do good and to take care of the people who were less fortunate than we were, and I don’t think we have that glue anymore.”