To commemorate a centennial, a look back at a tragedy — and maybe an attempted genocide 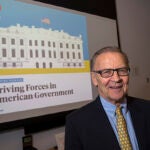 Now more than ever, political discussion is critical, professor says

One hundred years ago, Vladimir Lenin and the Bolsheviks overthrew Nicholas II of Russia. The removal of the czar ended three centuries of Romanov family imperial rule and thrust Russia into a Marxist experiment that degenerated into a brutal dictatorship: the Union of Soviet Socialist Republics.

While the Russian Revolution certainly reshaped Russia’s government in radical ways, historians have too often focused on the Bolsheviks or Marxism and given far less attention to the revolt’s broader, regional impact. “The term is misleading in many ways,” said Serhii Plokhii, the Mykhailo S. Hrushevs’kyi Professor of Ukrainian History and director of Harvard’s Ukrainian Research Institute.

Before 1917, he said, Russia had been a multiethnic, multinational empire. The revolution fractured it. Poland and Finland, which had been Russian territories, broke free. Ukraine remained, and became the largest minority nation in the nascent Soviet Union.

“What is very important and what is overlooked very often is the fact that the revolution gave birth, to a degree, to the separate nations of Russia and Ukraine. Before 1917, the position of the Russian imperial authorities was that there was one big Russian nation that included Russians, Ukrainians, and Belorussians — and the revolution ended that,” Plokhii said.

It also ended Ukraine’s reign as “the breadbasket of Europe” and a critical agricultural supplier to Russia. Not long after Lenin and the Bolsheviks promised desperate citizens “Peace, Land, and Bread,” the nation long known for its fertility endured the Holodomor, or Terror Famine, which killed nearly 4 million people in 1932–33.

Exactly how that came about, and whether it was engineered and executed by Joseph Stalin, Lenin’s successor, is the subject of an Oct. 23 talk by Anne Applebaum, a Pulitzer Prize-winning author and global affairs columnist for The Washington Post. She will discuss her new book, “Red Famine: Stalin’s War on Ukraine,” which examines the genesis of the Holodomor and whether Stalin was guilty of an act of intentional genocide. The discussion is part of a series of events that the institute will host to commemorate the impact of the Russian Revolution and consider its legacy.

“The Ukrainian famine took place in the context of a larger Soviet famine which was caused by the chaos of collectivization,” Applebaum told the Gazette. “Stalin wanted to carry out a revolution in the countryside and he moved all the peasants from their own farms to state farms and many resisted. It caused all kinds of disruption in the agricultural sector and led to mass food shortages.

“At the height of those shortages, in autumn of 1932, he became very paranoid about Ukraine. … There had been a massive anti-Bolshevik rebellion that took place in Ukraine during the civil war in 1918–1919, and he became afraid that the Ukrainian peasants were going to destabilize him again. So in the autumn of 1932, the Politburo casts a series of orders which effectively tightened the famine, specifically in Ukraine,” she said.

The orders meant that blacklisted towns and villages not only had to turn over their grain to the state, but to turn over seed grain, meat, vegetables, produce of all kinds. “And there was an effective cordon drawn around Ukraine so people were not allowed to leave and that meant if you didn’t have food, you couldn’t travel to Russia to look for it,” Applebaum said.

In the famine’s immediate aftermath, Ukraine was “Russified.” Russian peasants were moved into Ukrainian houses and the country’s elite were removed and replaced with either Russians or Russian-speaking Ukrainians — a fact the “current Ukrainian government is trying to reverse,” she said.

Despite its widespread devastation, details about the famine were not widely known for many decades. Stalin systematically repressed statistics and other documentation about the staggering death toll, and forbade anyone, including journalists, from writing about it, Applebaum said. Since Ukraine’s independence in 1991, a number of researchers have combed its national archives trying to construct an historical record, with instrumental support from the Ukrainian Research Institute, she said.

Though Russia views any discussion of the Holodomor as a threat, Applebaum said that understanding its history can inform our understanding of Russia today.

“It’s important to remember that the Russian state as it exists now has decided to see itself as the inheritor of this legacy — and it did not have to,” she said. Memories of the famine underlie much of the current tension between Russia and Ukraine, and, like Stalin, Putin “sees Ukraine as something that could destabilize Russia.”

“When he saw thousands of Ukrainians in 2014 standing in Maidan Square waving European flags and shouting anti-corruption slogans and calling for the rule of law, [Putin] saw that as a threat to himself. That language is a threat to his regime,” said Applebaum. “And that’s why the measures he’s taken have been so extreme.”