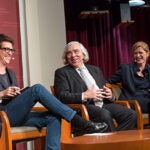 The evening began with two video clips from the online magazine Vice that are familiar, but still unsettling. One was of white nationalists chanting an anti-Semitic slogan at a rally in Charlottesville, Va. The other was an interview with a rally organizer, who made hateful statements about the late Trayvon Martin and President Trump’s Jewish son-in-law.

The interviewer in those clips, former New Republic senior editor Elle Reeve, was at the Kennedy School (HKS) on Wednesday to moderate the Institute of Politics panel “‘I’m Not a Racist, But…’ Examining the White Nationalist Efforts to Normalize Hate.” The two panelists, R. Derek Black, a former white nationalist activist and graduate student in history at another college, and Khalil Muhammad, professor of history, race, and public policy at HKS, presented fresh perspectives on how the movement gained prominence, and whether the growth of racial hate can be reversed.

Black pointed out early in the talk that “white nationalist” is a term that the movement itself prefers to “white supremacist,” though the philosophies aren’t far apart. “Their explicit goal is that they want the country to be 100 percent white, and they always claim that by separating everybody they’ll get rid of racism. But there is no way to say that you want to separate the races, and not be rooted in the idea of white supremacy.”

When Reeve asked if white nationalists tended to be seen as “people from Alabama,” Black replied that most of the stereotypes are inaccurate. “There’s a strange misconception that it’s a trailer park movement, or that it’s people who haven’t thought through their beliefs. But think about it. Who has the resources to travel across the country for rallies? It’s not a wealthy movement, but it’s bankers, lawyers, people with good jobs.”

This reality, said Muhammad, isn’t far from that of the 1920s Ku Klux Klan: “Those were upwardly mobile people who saw their effort as a patriotic duty.”

As someone who grew up in the movement — his father, Don Black, created Stormfront, the internet’s first and largest white nationalist site — Black was able to recite its major talking points: “The first is that black people are more criminal, and they point to the South Side of Chicago. The second is that Hispanic immigration is worse than European immigration, and that affirmative action is anti-white discrimination.”

Those positions have edged closer to the mainstream recently, and Black said that one of President Trump’s statements marked a major turning point.

“By the time of Charlottesville, every white nationalist was confident that everybody in a position of power was going to condemn them. Then Trump said there were good people in the march [his exact words were ‘very fine people’]. In 40 years of white nationalism, that has never happened before. For people who were on the fence, that was so legitimizing. Now they were able to just go for it.”

Both panelists agreed that the movement geared up during Barack Obama’s presidency — and not just because the election of a black president brought racists out of the woodwork. “A lot of the same people voted for Obama and for Trump,” Muhammad pointed out. “The 2008 election was a catalyst for talk about taking back the country. Republicans under Bush had escalated globalization, so what did they have to lose by voting for the black guy? So a vote for Obama was not proof that they didn’t have racist ideas. Some of those voters embraced ‘birtherism,’ of which Trump was a primary advocate.”

The first audience question was how best to respond to this rising threat. Despite some built-in pitfalls, Black said counterprotests were the best answer. “Outdoor events exist to get attention, and counterprotests give that attention. [The nationalists] want some kind of clash, to say that people are trying to shut down free speech,” he said. “But my answer would still be counterprotests. We need a strong, vocal sense that people in America do not accept that kind of talk.”

The panelists agreed that other way to undercut the movement is education. Black noted that attending New College of Florida led him to renounce the white nationalist movement in 2013, after making Jewish friends and attending Shabbat services with them.

“Remember that in the 2012 and 2016 elections, we saw [some Republican supporters] turn against the whole idea of college,” Muhammad said. “Part of their logic was that college is a place where bad things happen to white people. They are made to feel guilty. So,” he said, turning to Black, “thank God you went to college.”