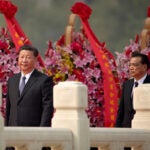 As the Political Twitterati like to say, “Elections have consequences.” Indeed, through the first nine months of Donald Trump’s presidency, nowhere has the vast philosophical and operational sea change between the Trump and Obama administrations been as stark as in the realm of national security.

From sharply rising tensions with a nuclear North Korea and decertification of the Iran nuclear deal to China’s growing global assertiveness and the State Department pullback from projecting American values, such as democracy and human rights, around the world, the United States faces urgent national security challenges.

In a panel discussion Monday evening at Harvard Kennedy School (HKS) moderated by MSNBC host Rachel Maddow, former members of President Obama’s cabinet, including onetime Secretary of Defense Ashton Carter, Secretary of Homeland Security Jeh Johnson, Secretary of Energy Ernest Moniz, and Samantha Power, U.S. ambassador to the United Nations, described what they see as a fraying of alliances, a loss of credibility with allies and enemies, a stepping back as a leader on human rights and democracy, and a relinquishment of diplomacy as a critical component of national security.

Moniz, a nuclear physicist, faculty emeritus at Massachusetts Institute of Technology, and senior fellow at Harvard’s Belfer Center for Science and International Affairs, said “The possibility of a nuclear weapon being used — probably through miscalculation — is higher today than at any time since the end of the Cold War and arguably, since the Cuban Missile Crisis.”

Moniz, who played a leading role in negotiating the Iran nuclear deal for the United States, said he worries that the president’s “loose talk” about nuclear weapons and the role they should play in our national security indicates that the administration views them not just as a deterrent but as a tool for possible use on the battlefield.

“I think that would be a terrible mistake to do that. I’m not arguing against having a strong deterrent — we need that — but that’s a different issue from elevating it in our national security strategy,” he said.

Even if Trump’s Twitter brinksmanship with North Korean leader Kim Jong-Un is only bluster, what concerns Moniz most is such words can chip away at the goodwill and multilateral relationships that the United States has spent decades building globally since the end of World War II, doing “damage that will take a long time to repair,” he said. “We don’t know how much is real, how much is verbiage in the end. But even if it’s verbiage, the reality is allies are responding to that.”

Carter, now director of the Belfer Center for Science and International Affairs, said the looming prospect of a nuclear confrontation between the United States and North Korea is “concerning.”

“I don’t know where that’s going to go,” he said. Though the United States would “win,” he added, “the intensity of violence” it would generate would be a level “the world has not seen since the last Korean War.”

Noting how President Harry Truman spoke of being haunted after he dropped atomic bombs on Japan during World War II in 1945, Power said there’s “a real question” whether Trump’s worldview would restrain him from such catastrophic action.

“Is President Trump a person who gets haunted, who can think about other people, even in this country, as deserving of empathy and respect, or can he put himself in the shoes of others?” said Power, the Anna Lindh Professor of the Practice of Global Leadership and Public Policy at the Kennedy School, the Perrin Moorhead Grayson and Bruns Grayson Fellow at the Radcliffe Institute, and professor of practice at Harvard Law School. “There are grounds for worry, obviously.”

After Trump announced last week that he will decertify the deal even though most experts agree that Iran is complying with its provisions, Moniz said the decision causes real harm for the United States even if Congress does not ultimately pull out.

“It is true that it did not take us out of the Iran agreement, but it has already done damage with our allies,” he said. “If we were to abrogate the agreement while Iran is complying, it’s just a long list of negatives for us and for our national security.”

The panel stressed the vital but often underappreciated role that diplomacy plays in national security. “People tend to think diplomacy, like alliances, consists of favors we do for foreigners, and it’s not,” said Carter. “It’s one of the ways you get what you want.”

Power said she is troubled by an administration that appears to “turn its back on even a concept of diplomacy or an investment in diplomacy” out of some “willful, sometimes even gratuitous desire to do the opposite” of President Obama, who strongly supported diplomatic solutions.

The administration’s failure to fill critical overseas and career staff positions at the State Department has driven away some of the nation’s best negotiators, panelists said.

“They’re fleeing the government because they see the signals” that diplomacy is no longer central to U.S. foreign policy and believe that Trump’s favorable comments toward authoritarian leaders such as in Turkey, the Philippines, and Russia indicate the United States doesn’t prioritize human rights. The administration is “very willfully saying that the way a country treats its own people just doesn’t matter to us anymore,’ said Power.

Asked by a student what Trump’s legacy may be, Johnson, a senior fellow with the Belfer Center’s Homeland Security Project, said it would be unwise to suppose that his political success is a momentary aberration.

“We shouldn’t assume this is a blip on the screen. As Americans get used to this style of presidency, there are a lot of people who just may say, what the heck, why should I change in 2020?” he told students. “So those of us who want change are going to have to work really, really hard for it with an incumbent in the White House we don’t like, if that’s the case.”