Life stories keep him turning (and sniffing) the page 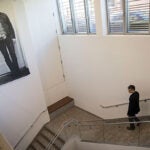 ‘The Paintings of Yoshiaki Shimizu’

There has rarely been a decisive moment in Luke Kelly’s life that hasn’t involved a book.

Kelly ’19 was homeschooled for most of his childhood in Pascagula, Miss., which included constant reading, from “Aesop’s Fables” to the short stories of Eudora Welty. He also studied piano, helped by a teacher whose worldliness and charisma still speak to Kelly from the (stolen) page.

“That piece of sheet music I ‘permanently borrowed’ was the first book I consciously collected,” he said. “I collected it not to practice with, but to remember all that I learned from someone I so greatly wanted to imitate. If you open it up, you can still smell that house.”

His study of “Schofield’s Definition of Discipline” during his brief time at West Point helped Kelly realize that military training wasn’t the type of education he wanted. When he landed at Harvard already in possession of what would later be honored as an exceptional book collection, he knew he had found the right place.

“Harry Widener is my patron saint,” said Kelly, a history concentrator. “He lived this young life, died too early, and all people know him for is the library. But looking at his books and what he valued, I feel like I know him better than most people do because I see his passions. You miss the whole point if you just see he had a Gutenberg Bible. I know what kind of pipe tobacco he owned.”

Such attention to detail reflects Kelly’s drive for connecting with the life behind a book, a passion his job at Houghton Library has rewarded and deepened.

“I’d work there for free,” he said. “I’m interested in people’s biographies, memoirs, and sometimes people didn’t leave those behind … sometimes you get that sense of what they valued and excited them through the objects they left behind.

“I’ve pored over Widener’s copy of ‘The Pickwick Papers,’ and it reeks of Latakia pipe tobacco. No one would know that unless you were holding it and sniffing it. Every day I’m there I find out something new.”

“He’s a perfect learner, has a huge knowledge about books, and has excellent memory,” Zajac said. “I had a very similar enthusiasm when I was his age.”

While in high school, Kelly began collecting books by the Alabama author and poet Eugene Walter, starting with “The Untidy Pilgrim” (1954).

“It was the first first-edition book of his I bought, and I couldn’t believe I hadn’t heard of him,” Kelly said. “I then went on a mission to find everything he’d ever written.”

“I didn’t expect to get into it until I’m 65 years old,” said Kelly. “I’ve accomplished half my life goals.”

Kelly also proudly belongs to the John Adams Society, a conservative-leaning club for debate of politics and moral philosophy.

“There are monarchists, Hamiltonians — it’s not an echo chamber,” he said. “We have intellectual discussion that is informal and formal at the same time. We argue about the rules as much as the debate resolutions.”

In both the John Adams Society and at Houghton, Kelly has found ways to connect the past with the present. That’s no less the case in one of his favorite fall courses, “History of the Book and of Reading,” where he’s found a like-minded professor in Ann Blair.

“It’s usually a very moving experience for students to handle a book that is hundreds of years old, as we can in our wonderful Houghton Library,” said Blair. “Luke has the love of books written all over him, and he’s a very committed member of that community. I’m delighted that he will surely carry forward the love and knowledge of books.”