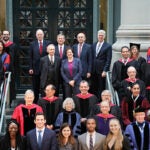 Half a century after the Civil Rights Act of 1964, more than half of black Americans still experience some form of racial bias, with systemic effects ranging from unequal prison terms to premature death, according to a new poll from the Harvard T.H. Chan School of Public Health.

The poll made it clear that much work remains to make healthcare, housing, and access to justice available to all, said panelists discussing the research at a Chan School Forum last week.

“We need a narrative change, and we need to work with all the agents of our culture to change that narrative,” said David Williams, the Florence and Laura Norman Professor of Public Health and professor of African and African American studies and sociology. “That’s not easy to do, but it can be done.”

In the poll, co-sponsored by National Public Radio (NPR) and the Robert Wood Johnson Foundation, 57 percent of African-Americans said they were discriminated against in terms of equal pay, and 56 percent said they faced racism when applying for jobs. Fifty percent said they had experienced discrimination when interacting with police, and 45 percent while they were trying to rent or buy housing.

Further, the poll found that blacks higher up the economic ladder were likelier to report discrimination than poorer ones.

“This is not what you’d call the American experience,” said Robert Blendon, the Richard L. Menschel Professor of Public Health and senior associate dean for policy translation and leadership development at the Chan School and professor of health policy and political analysis at both the Chan School and the Kennedy School of Government. “The story goes that once you get education and become successful, these things disappear. Not true.”

Those results were discussed in a Chan School Forum panel on Oct. 24, “Discrimination in America: African American Experiences,” moderated by Joe Neel of NPR. (The poll’s research on six other demographic groups will be discussed in the coming weeks.) Blendon said the poll was unique because rather than asking general questions about the state of the country, it dealt only with discrimination as personally experienced.

Williams said it confirmed what research has shown before.

“We have scientific evidence that discrimination is pervasive. Over 200 African-Americans die every day who would not die if they had the same health experience as whites. Think of a huge jet crashing every day — that is the kind of disparity we’re talking about.”

Further, he said the experience of everyday discrimination is a stressor that adds to the mortality rate. “Being treated with less courtesy, the little indignities that take place every day — that makes a stressful life experience. It literally causes premature death.”

“The American criminal justice system in inherently racist,” said Elizabeth Hinton, assistant professor of history and of African and African American Studies. She said that although African-Americans are responsible for only 15 percent of illegal drug use in the country, they account for nearly 50 percent of drug-related incarceration.

Hinton said those numbers eased somewhat in the Obama era, but the policy of zero tolerance has been revived under Trump.

“African-Americans do not have a high level of trust in the police. More than a quarter avoid doing ordinary activities due to fear of coming into contact with them,” Hinton said. She said some current programs aim to integrate the police with their community, but do not go far enough.

Dwayne Proctor, senior adviser to the president and director of the Achieving Health Equity Portfolio at the Robert Wood Johnson Foundation, said his organization is especially concerned with the lack of health access for African-Americans.

“We’re trying to build a culture of health in America and you can’t do that until you have health equity in place. Discrimination and poverty, these things impede our systems’ ability. And the word systems may sound mechanical, but what we’re talking about is people.”

The California-based institute PolicyLink is also working to address discrimination in jobs and housing. Speaking via Skype from Los Angeles, Deputy Director Mary Lee said that most of the city’s homeless population of 66,000 are black and Latino.

“Biased beliefs have transformed society in zoning and land-use policy,” she said. “Whites have benefited from homeowners’ insurance, while blacks were red-lined. … When you look at the human capital that we waste, and how many people are excluded from society, it is such a loss.”