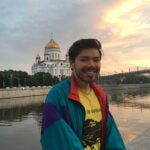 An American in Moscow

On Thursday, the English writer Kazuo Ishiguro was awarded the Nobel Prize in literature. In giving the honor the committee noted that the author had crafted “novels of great emotional force” that “uncovered the abyss beneath our illusory sense of connection with the world.” Ishiguro’s fiction has provoked strong reactions, from praise to dismay, throughout his long career. One reader who has written from both perspectives is Harvard professor and New Yorker book critic James Wood, who shared his response to the Nobel in a Gazette Q&A.

GAZETTE: In a 2015 review of “The Buried Giant” you said that Ishiguro writes “eccentrically against the norms.” Can you elaborate?

WOOD: Ishiguro does his own thing, and his work doesn’t resemble anyone else’s. He has written historical fiction set in Japan (“An Artist of the Floating World”), England (“The Remains of the Day”), and Shanghai (“When We Were Orphans”). He has written dystopian science fiction (“Never Let Me Go”) and historical fantasy (“The Buried Giant” is set in seventh-century Britain, and features dragons, ogres, and knights). He is undistracted by literary fashion or the demands of the market. In this, he somewhat resembles another British Nobel laureate, William Golding, who wrote very curious, often fantastical or allegorical novels, and wonderfully seemed not to give a damn what anyone thought of them.

GAZETTE: Do you have a favorite Ishiguro book?

WOOD: I have two favorite Ishiguro books, each utterly unlike the other: “The Remains of the Day,” his perfect evocation of repressed (and politically sinister) English country house life in the late 1930s, and “Never Let Me Go,” his dystopian fantasy about cloned schoolchildren, who are living out their short lives at a special boarding school before being called up to “donate” their organs to more fortunate, uncloned British citizens. It’s a terrifying allegory of mortal human life.

GAZETTE: Is there one thing you like the most about his writing or that you think he does best?

WOOD: He does a kind of extreme calmness of tone — really a kind of punitive blandness — very well. This might not sound like high praise, except that he puts it to uncanny uses: That smooth blandness wonderfully enacts and mimics the political repressions and omissions of the worlds of “The Remains of the Day” and “An Artist of the Floating World.” And he made good sinister use of that blandness in “Never Let Me Go,” which in one sense is a grindingly banal account of English boarding school life, until you begin to realize that the story you are reading is really the story of a death camp, not the story of a boarding school.

GAZETTE: Is there anything in his writing that frustrates you?

WOOD: I think that when Ishiguro is off, that same blandness can be pretty boring. I found “The Unconsoled” very hard to read, and I found his last novel, “The Buried Giant,” to be an allegory at once too vague and too literal. His very distinctive style needs the pressure of form to put it to proper use: Both “The Remains of the Day” and “Never Let Me Go” are formally cunning works. “The Unconsoled” and “The Buried Giant” are foggy, amorphous, miasmic.

GAZETTE: He’s often been compared to Franz Kafka. In your mind, what is it about his work that evokes that comparison?

WOOD: The Kafka comparison seems fair — perhaps Ishiguro is closer to the Kafka of “The Castle” than to the terrors of “The Trial.” In “The Castle,” Kafka evokes a world of crushing procedural banality, in which the hero is routinely blocked from his ambition — to get to the castle — by the most mundane of obstacles. The allegory emerges very naturally from the style. That is exactly how “Never Let Me Go” works, too: The allegory emerges gradually, and very naturally, from the humdrum concerns of the style.