Detours, some fraught, on path to global citizenship 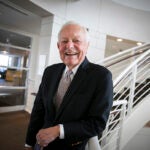 No simple answers as scholars scrutinize the evolution of an idea

The idea of a “global citizen” is often invoked but seldom defined, usually suggesting some fuzzy notion of a peaceful international community. In the opening panel of Worldwide Week at Harvard, a team of faculty members considered what the term really means.

Tom Ashbrook, host of NPR’s “On Point,” moderated the discussion, titled “Are You a Global Citizen? Is That a Good Thing? The Meaning of Global Citizenship,” Monday at the Science Center. To open the conversation, he shared a memory of his mother.

“We grew up on a farm in rural Illinois; the neighborhood was half immigrant Swedish and half old American,” Ashbrook said. “She spent time abroad in a U.S. program for farm youth, and from then on she drilled the idea into us. Our house was full of farm kids from India, from Europe, and from Africa — and we grew up thinking that was normal. It was a sincere, ‘kumbaya’ time. Global citizenship wasn’t literal, but it meant caring about other countries’ fundamental humanity as you would your own.”

The panelists went on to look at how global citizenship works in a wider sense. Danoff Dean of Harvard College Rakesh Khurana brought up his experience studying the World Economic Forum and its annual retreat in Davos, Switzerland. The forum was founded with utopian goals by Klaus Schwab, but over time its key players became multinational corporations.

“The ideal is that a new world would emphasize a rising awareness and a kind of secular humanism, but how does this really look in action?” he asked. “It became a nexus of elites that have more in common with each other than they have with their own nation-states. And it became more about the self-interest of those elites. Like many things that start out as a good project, it’s become a bit of a racket.”

Homi Bhabha, director of the Mahindra Humanities Center, expanded on the pitfalls of economic globalism. “What we have seen is that globalization produces its own kind of poverty and its own inequality, just as it produces oases of privilege and success.”

Ashbrook suggested that economic globalism has produced a strong nationalist backlash — one that Steven Bannon tapped as the architect of Donald Trump’s campaign.

“People feel much more comfortable about opening up to the world and empathizing with others when they didn’t have to worry so much about themselves and their children,” said Dani Rodrik, Ford Foundation Professor of International Political Economy. “There was a time when the labor movement was in favor of free trade because it was seen to be conferring more benefits. But we’ve now seen that the winners get more, and the losers don’t always get compensated.”

Khurana zeroed in on the consequences.

“Populism used to be about power of the people; now it’s a belief that the conspirators have become the elite and the intellectuals,” he said. “We are losing our own civic identity due to the loss of shared responsibility.”

Returning to the idealism of his childhood, Ashbrook asked the panelists what Harvard students can do to become better world citizens.

“I’d say the world is connection,” said Danielle Allen, director of the Edmond J. Safra Center for Ethics. “The world is at home, and the world is also here at Harvard. Take advantage of that. And when you travel, pick hard places to live in, the places that are going to stretch your perception of how the world operates. Then commit to a place where you can actually work for advancement.”

Global citizenship is largely a matter of awareness, Bhabha said.

“Globalization begins at home, and thought always breaks down boundaries and sovereignties. Think of your global citizenship as an extension of your local citizenship, not a substitute for it.”