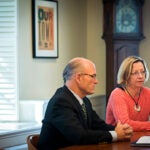 Looking back, but thinking ahead

Support through grants and awards continues to expand

This past academic year, Harvard set a record in financial aid by distributing $414 million to students across the University. That number included roughly $175 million in need-based aid for Harvard College undergraduates — more than half of whom receive financial aid — graduate student grants and fellowships, and a variety of additional loan-free funding opportunities.

The history of financial aid at Harvard is almost as old as the institution itself. Three hundred and seventy-five years ago, a gift of £100 from Lady Mowlson of London (nee Ann Radcliffe, for whom Radcliffe College was later named) established an endowment to support College students in need of assistance with tuition costs. To this day students benefit from Lady Mowlson’s gift.

Over the centuries Harvard’s financial aid expanded in both sum and reach, but in recent decades the University’s distribution has seen its most dramatic growth. In the past 10 years alone, scholarship aid throughout the University’s 12 degree-granting Schools has increased by 64 percent, roughly $162 million.

Part of this growth is due to the implementation of the Harvard Financial Aid Initiative (HFAI), which guarantees that every undergrad has the opportunity to graduate debt-free. Since its 2005 launch, HFAI has awarded nearly $1.8 billion in need-based grants, making a Harvard education available to all admitted students regardless of financial circumstances. This annual commitment is met through a combination of endowed funds, annual philanthropy, and discretionary funds of the dean of faculty of arts and sciences, all of which have been vital in facilitating the program.

Raising additional funds to support HFAI and broaden graduate student fellowships remains a top priority of The Harvard Campaign, which concludes next year. Harvard President Drew Faust expressed her appreciation to the many alumni and friends who have helped the University achieve such high levels of financial aid.

“Their generosity has enabled Harvard to deepen its long-standing commitment to financial aid for undergraduate and graduate students,” said Faust. “It broadens access and make the opportunities available at Harvard a reality for thousands of talented individuals across all of our Schools.”

“Higher education is experiencing varying degrees of economic pressure,” he said. “Yet, in the face of these challenges, the need for financial aid can be even greater. The success of The Harvard Campaign has had an immediate impact on our ability to provide and expand these resources across the University, and generations of Harvard students will benefit.”