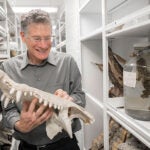 A new era in the study of evolution

Epidural analgesia — a mix of anesthetics and narcotics delivered by a catheter placed close to the nerves of the spine — is the most effective way to relieve labor pains.

In widespread use since the 1970s, epidurals have long been thought to slow the second stage of labor, which begins when the cervix is completely dilated and ends when the baby is delivered. Because a longer duration of this stage of labor is associated with adverse outcomes, obstetricians routinely reduce or discontinue epidural pain management in an effort to expedite delivery.

That practice could be out of date and misguided, according to research led by scientists at Beth Israel Deaconess Medical Center (BIDMC). A paper published this week in the journal Obstetrics & Gynecology reports that epidural medication had no effect on the duration of the second stage of labor, normal vaginal delivery rate, incidence of episiotomy, position of the fetus at birth, or any other measure of fetal well-being the researchers investigated.

“We found that exchanging the epidural anesthetic with a saline placebo made no difference in the duration of the second stage of labor,” said senior author Philip E. Hess, director of obstetric anesthesia at BIDMC and an associate professor of anesthesia and of obstetrics at Harvard Medical School. “Not even the pain scores were statistically different between groups. However, pain scores in women receiving the saline placebo increased over time, as would be expected.”

The study enrolled first-time mothers who were given a patient-controlled epidural analgesic pump in the first stage of labor. All mothers were given active pain medication during this stage. When they reached the second stage of labor, participants were randomized to receive either the active anesthetic (low doses of the drugs ropivacaine and sufentanil) or the saline placebo.

Women in excessive pain were given unblinded doses of the active pain medication at their doctors’ discretion, and the doctors could also terminate epidural infusions at any time based on clinical indicators.

In addition to the duration of the second stage of labor, Hess and his colleagues looked at a variety of outcomes measuring fetal health and well-being, such as birth weight, Apgar scores (a quick measure of fetal health taken minutes after birth), and umbilical artery pH, a metric for assessing fetal blood-oxygen levels. The team also compared patient-reported pain scores and patient satisfaction with pain-control measures.

“Twice as many women given the placebo reported lower satisfaction with their pain relief compared to those provided the anesthetic,” said Hess. “Ethically, if epidural medications result in a negative effect on the second stage of labor, one could argue that a mild increase in maternal pain could be balanced by a successful vaginal delivery. We didn’t see any negative effects, but epidural analgesia in the second stage of labor remains controversial and merits follow-up studies.”