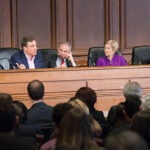 For politics, a ray of hope

In new book, Harvard law professor explains the centrality of a cautious process that helps to ensure America thrives

With special counsel Robert Mueller bringing federal charges against two former advisers to President Trump’s campaign, and a campaign foreign policy adviser pleading guilty to lying about efforts to obtain damaging information from the Russians about Hillary Clinton, what was once inconceivable has become a little less so.

Should evidence eventually emerge of possible criminal activity involving Trump himself, analysts say, Congress might have to ponder opening the impeachment process against him, as it last did against President Bill Clinton in 1998. Few clauses in the U.S. Constitution are as mysterious or as misunderstood by Americans as impeachment, and that’s unfortunate, contends Cass R. Sunstein, the Robert Walmsley University Professor at Harvard Law School.

“It’s not just for specialists. It can’t be. As much as any part of the Constitution, the impeachment clause puts the fate of the republic squarely in our hands,” writes Sunstein in a new book, “Impeachment: A Citizen’s Guide” (Harvard University Press).

In his book, Sunstein recounts the complicated debates among the nation’s founders over how best to protect the fledgling United States from succumbing to a president with king-like aspirations. Aside from elections every four years and the congressional and judicial checks on executive power, the founders believed that the people’s ability to remove a president through impeachment was the most important governmental safeguard and a hallmark of American exceptionalism.

In an interview, Sunstein clears up some misconceptions about the impeachment process and discusses why he thinks that too-infrequent calls for a president’s impeachment can prove as dangerous to the republic as too many.

GAZETTE: You say your decision to write a book about impeachment was not motivated by current events. So why this topic and why now, then?

SUNSTEIN: The real reason, the reason I wrote the book, is that in February I bought an old house in Concord! The house was one of the very few places that the British came to find munitions on that fateful day in April 1775 — and the house, built in 1763, got me intensely interested in the American Revolution.

I had written about impeachment a long time ago, but I had not appreciated its centrality to our whole constitutional system. I failed to see the powerful link that impeachment makes among: (1) the war for independence (no kings here); (2) the fiery march of republicanism; and (3) the (highly controversial) constitutional creation of a powerful executive. Because of impeachment, “We the People” can remove that powerful executive from office, which allows (3) to keep faith with (1) and (2).

GAZETTE: The American public isn’t particularly well-informed about what impeachment is and what it isn’t, and you say that’s a bad thing. What are some of the biggest misconceptions about impeachment?

GAZETTE: In the book, you identify two dangers associated with impeachment powers: being invoked too frequently and being invoked not often enough. Can you explain what you meant?

SUNSTEIN: The first danger: If, at any point, those who intensely dislike a president start calling for his impeachment just because they intensely dislike him, we’ll have two bad things — distraction and instability. The United States needs to focus on substantive issues, and outside of the most unusual circumstances, the presidential term is for four years. (As they say: For. Four. Years.) Throwing the occupancy of the White House into doubt is destabilizing.

The second danger: Suppose that a president does something really terrible, in the constitutional sense (a high crime and misdemeanor). Maybe he has invaded liberty in some horrendous way. Because he’s the president, a lot of people will support him, even if they shouldn’t. Impeachment is our fail-safe, and we shouldn’t decline to use it when we need it.

GAZETTE: The book spends a lot of time discussing the various debates people like Alexander Hamilton, James Madison, George Mason, et al., had at the dawn of the nation over the executive branch’s broad powers — and the checks on that power by the legislative branch and the citizenry. Why were those arguments important, and did we wind up with the best outcome, in your opinion?

SUNSTEIN: The arguments matter because it’s always good to know what those who designed our Constitution were thinking about. But I would go further. Even if you do not think that the Constitution always means what it originally meant (and I am not an “originalist”), you might agree that, for impeachment, it does mean what it always meant. (So there I am an “originalist.” The book has a chapter on that.)

GAZETTE: You talk about the term “high crimes and misdemeanors” as being neither precise nor overly vague. The book also runs through a number of scenarios involving a president’s actions around things like lying, firing the appointed heads of federal agencies such as the FBI, or withholding cooperation or subpoenaed documents from Congress, and you assess whether they’re impeachable offenses. One that caught my eye is whether a president can be criminally prosecuted or indicted while in office. You say no but concede the Constitution is unclear on the prosecution point. How should we understand those terms, and doesn’t the immunity afforded to a president while in office make him essentially above the law during his term?

SUNSTEIN: It’s a pretty messy legal issue. One way to resolve it: Impeachment is the mechanism by which we go after a president who has done something wrong, and that means that a criminal prosecution is just out of bounds. Another way to resolve it (and for technical reasons, I like this better): A president needs to be able to focus on his job, and if he’s fighting off a criminal prosecution, it won’t be easy for him to do his job. To be adequately justified, that conclusion would require a lot of spelling out, but some Supreme Court rulings engage in reasoning of this general sort. I think they’re right. But on this issue, reasonable people differ.

GAZETTE: In addition to voting someone out of office, impeachment is clearly an essential safeguard against tyranny. But at the end of the day, voters can’t initiate impeachment proceedings. So if the House, dominated by party members faithful to the president for political or even corrupt reasons, for example, opts not to begin impeachment, what recourse is left? Isn’t that a fatal weakness?

SUNSTEIN: It’s a problem and a gap and maybe a weakness, but I don’t think it’s a fatal weakness. Note first: If the president is incapacitated in some sense, the 25th Amendment can be used. And if the president does something genuinely horrible, there’s a good chance that “We the People” will rebel, and the House will respond. If not, freedom of speech remains available. (I hope.)