For politics, a ray of hope 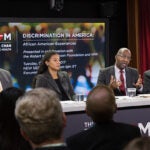 At Law School, 5 U.S. senators say obstacles to progress are great, but not insurmountable

At a time when American politics are beset by deep divisions and regular paralysis, five U.S. senators told a Harvard Law School (HLS) audience Friday that there is real reason for concern, yet some hope for their institution and the country.

“We are in extraordinarily challenging times. We see dysfunction, we see threats to our environment, to our national security. We should take some comfort in the fact that our predecessors … also endured difficult times,” Reed said. “We’ll do it again. It won’t be easy. It will take us all to commit ourselves to that effort.”

The forum, moderated by David Gergen, public service professor of public leadership and director of the Center for Public Leadership at the Kennedy School, was part of “HLS in the World,” a two-day event celebrating the School’s bicentennial.

Noting the common perception that “everyone is at everyone’s throats in politics,” Gergen asked the senators why there couldn’t be more civility in the national conversation.

“We have an obligation not just to be civil in these forums but to be civil on the (Senate) floor,” Reed agreed, noting that he does see that collaborative spirit on the Armed Services Committee, on which he, Cotton, Kane, and Warren sit.

“There actually is a lot of stuff that gets done on a bipartisan basis,” Warren said, citing passage of legislation that she co-sponsored to allow over-the-counter sale of hearing aids.

However, “There are places where we plant our feet and pound on each other sometimes,” she added. “When somebody is trying to take away health care from 25 million Americans, that is a time to plant your feet and start pounding on the other side.”

Kaine said the system created by the framers of the Constitution is working as intended — with one exception. “I think the Article 1 branch is broken,” he said, referring to Congress. “We respond to things that presidents do, and that’s not [the intent].”

Warner said American politics has “systemic problems,” observing, “There’s no super PAC for rational people … The state of our political debate is pretty brain-dead and caught in the 20th century.”

“Increasingly in our country, you can live and work and worship among people who … have the same views about politics and about morals,” he said. He encouraged students to “try to get outside those circles.”

Responding to an audience member who urged more cooperation from Republicans, Cotton said he tries to “represent the views of the majority of people from Arkansas.”

Warren commented, “Our systemic problem is that we don’t do enough representing the people. … Real people don’t have the kind of influence in Washington that they should, and until we fix that,” nothing else will be fixed.

Kaine, who experienced autocratic rule while living in Honduras, said the United States faces an “existential moment,” citing President Trump’s attacks on such institutions as Congress, the judiciary, and the press.

“I think the chapter’s end is going to be that we are in a country where the institutions are more powerful than any individuals,” he predicted.

Gergen, himself HKS ’84 (and LL.B. ’67), asked the senators how the School influenced their careers.

“It exposed me to people of incredible diversity in terms of thought,” Warner said, adding that being around “so many smart people” also reminded him not to fear failure. “Too many people in our society are risk-averse,” he said.

Kaine said HLS gave him “incredibly practical” legal skills, and taught him “the difference between an opinion and a conviction.”

Warren said Harvard allowed her to pursue her chosen issues, and to try to inspire students to do the same. “The only mistake you can make is not to get out and do something you’re passionate about.”

“One of the great things this law school does is to show people that it’s not really about answers, it’s about the right question,” which “serves us very well” in Congress, said Reed.

Responding to a question from Gergen, Cotton said that as a young conservative he never felt uncomfortable expressing his opinions on campus.

“It shows Harvard’s commitment to learning. Part of learning is being exposed to new ideas,” he said.

Urging students to stay involved, Warner said, “As much as you want to throw a shoe at the TV when the news comes on, we all feel the same way, and we’re inside the TV. But don’t tune out. If you tune out, you turn the keys over to the extremes, because they’re not going to tune out.”