Now more than ever, political discussion is critical, professor says 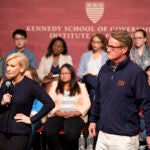 Questions and concerns about America’s future

At this particularly contentious time in American history, discussion about politics is not only pervasive, it’s critical, a Harvard Kennedy School professor said last week.

The event was part of the Ed Portal’s Learning Xchange series, a program offering community members the chance to engage with professors and each other around HarvardX online course content in a classroom-style setting.

“I have chosen a section from the lecture on public opinion and will make use of gun control as a case study, asking attendees to think through how public opinion on the issue has affected the nation’s gun laws,” Patterson said in an interview before his talk in Allston. “It’s a compelling story about how the political system operates.”

Patterson said polls can show general waves of public opinion on contentious issues such as gun control, where the U.S. is an outlier compared with other countries. But to understand the political strategy on both sides, what’s really necessary is to drill down into those numbers.

“You look at the statistics and you can see we are a violent country in a comparative sense — we have many more gun deaths,” he said. “And when people think about it, it’s a no-brainer — limiting the size of magazines for hunting and self-defense, why do we need these mega-magazines?”

While people can certainly disagree on the need for guns, “Why is this so hard [for us] as a society to deal with?”

The answer, he said, is attitudes, information, perception, and opinion.

“If you read the way citizens ought to behave, there is a rational-actor model that underlies our sense of public opinion,” Patterson said. “Information comes in, we gather that information, with that information we put together some sense of what the problem is, and then we have an opinion that is a response to that thought process.”

In politics, legislative action quickly follows the opinion, and in doing so entrenches it, he said.

Patterson explained that to a politician who wants to stay in office, the first question about any issue is whether a given stance will bring in votes or campaign funds. This applies to gun control, abortion rights, and any other controversial issue, he said.

Last week, with 58 people shot dead in Las Vegas by a lone gunman with an automatic assault weapon, gun control was particularly pertinent. Tesh Parker of Cambridge, for one, said he came to the lecture because “it will be constructive learning.”

But Patterson said he did not believe the tragedy would result in more restrictive gun laws. He cited cases including the mass shooting at Sandy Hook Elementary School in Connecticut in 2012.

“What you find in the case of almost every issue is the intensity is never quite balanced,” he said. “It’s pretty rare when both sides on an issue are equal in their intensity of opinion about that issue.”

“The topic — misinformation — relates to our dysfunctional politics, a problem to which all of us are contributing,” he said. “The height our level of misinformation has reached is an obstacle to effective governing, but why is there so much of it?”

Patterson presented studies that show that not only is more misinformation available, but more people are accepting it as fact. He said we are more comfortable if we think the world fits our desires, and more and more of us lack the incentive to prove ourselves wrong.

For example, in 1980 polls showed that 15 percent of the people surveyed had incorrect perceptions of a major issue. By 2015, that number had increased to 39 percent, meaning two out of every five people now act on a mistaken view of the world.

To explain this trend, Patterson cited the “familiarity bias,” in which people mistake familiarity of a claim with its accuracy, and the “confirmation bias,” which holds that people more readily accept things that fit their beliefs. That is followed by “motivated reasoning,” the tendency to defend existing beliefs against contradictory information.

This tendency is growing because the information system has changed so much over the past several decades, Patterson said. Today there are fewer authoritative news sources and a far greater number of less-reliable sources such as talk shows, bloggers, and fake news — which, he said interestingly, is intriguing, sensational, and quick to trend. In addition, he said Americans are facing deep economic, social, and political changes, while trust in the government is in the tank.

“Is it solvable? My greatest thought about this — nothing lasts forever,” Patterson said. “It takes time. Keep talking, and keep reading.”