In their activism, a different kind of strength 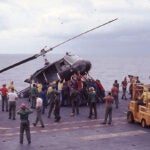 JFK Jr. Forum looks at how black athletes stand up — or take a knee — for equal rights

Throughout his conversation with sportscaster James Brown ’73, Harry Edwards repeated one sentence: “We’re better than this.” And that hopeful phrase became a theme of sorts for “From Robinson to Kaepernick: The Evolution of Athlete Activism,” a JFK Jr. Forum at the Harvard Kennedy School on Wednesday.

Brown and Edwards, a UC Berkeley professor emeritus, charted the history of African-American athletes fighting for legitimacy since the turn of the 20th century, when they were considered intellectually and physically incapable of participating in mainstream sports. Starting with Jack Johnson’s defeat of white heavyweight champion Tommy Burns, black athletes have stood on one another’s shoulders to advance Civil Rights. From Jesse Owens advocating the boycott of and then dominating the 1936 Olympics, to Jackie Robinson breaking baseball’s color barrier, to Muhammed Ali refusing to fight in Vietnam, African-American athletes have pushed the limits of their clout in support of racial equality.

Today, in what Edwards describes as the fourth wave of athletic activism, black athletes are acutely aware of the expectation that they use their celebrity to help others. He referenced Golden State Warriors point guard Stephen Curry, who leveraged his endorsement deal with Under Armour when he called CEO Kevin Plank about his statement of support for President Trump. In response, Plank took out a full-page ad in The New York Times to clarify his sentiments.

Curry’s phone call, though, has not received a tenth of the coverage of the silent protest by former San Francisco 49ers quarterback Colin Kaepernick, who became controversial since he began taking a knee during the national anthem at the start of the 2016 NFL preseason. Edwards, who was a staff consultant for the 49ers under head coach Bill Walsh during the 1980s, strongly supports Kaepernick’s activism, which he said has inspired other athletes.

“You have athletes who are lining up and saying, ‘What we see going on in the community is wrong. We’re better than that,’” Edwards said. “They also realize — as Michael Bennett found out [when he was allegedly handcuffed and threatened by police in Las Vegas] — that the only reason it was Michael Brown lying in the street in Ferguson, Missouri, and not Michael Bennett and not LeBron James and not Malcolm Jenkins, is because they were not there. Because they are subject to the same kind of treatment.”

Past progress in race relations can appear fleeting. Edwards said statistics show that segregation in many cities and schools is currently worse than it was right after Jim Crow, and more African-Americans are killed by police today than were recorded lynched in the 19th century. “There is no final victory,” he said.

Several times during the discussion, Edwards mentioned the plight of female athletes, in particular what he called the “assault” on Roe v. Wade and Planned Parenthood that he believes endangers Title IX. He said Roe helped colleges see female athletes as assets, rather than flight risks who might leave their school and sport if they became pregnant.

Edwards also lauded to Knox College basketballer Ariyana Smith, who became the first athlete to protest Brown’s killing when she lay down during the anthem for 4 minutes and 20 seconds — a nod to the 4 hours and 20 minutes that Brown was left dead in the street. Knox briefly rescinded her scholarship, but Smith refused to return, deciding to take her talents elsewhere.

Brown asked if college athletes, such as the Crimson basketball team, which co-sponsored the forum, should follow the pros’ examples.

“You don’t do the things that [those activists] do unless you love this country,” Edwards told them. He emphasized that college athletes are students first, and should use their educations to understand the history of African-American athlete activism in the U.S. “Dream with your eyes open. You got to understand there is a price to pay.”

Edwards also had words for President Trump. “We’ve had ignorant people in there before, that’s not a big deal,” he said to laughter. But when Trump speaks about Muslims, women, African-Americans, and protesters, Edwards said, the vitriol that laces his words prevents forward movement.

“He’s going to find himself on the same shelf of presidential irrelevancy with Chester A. Arthur and Franklin Pierce.”

When the forum segued into a Q&A session, the mother of a 9/11 victim said she thought Kaepernick’s protest was disrespectful to the families who lost loved ones in the 2001 attacks.

“[Is there] a better voice than taking a knee?” she asked.

Edwards replied that reducing loss to a numbers game misses the point. He pointed out that far more African-Americans have been killed at the hands of the U.S. government than Americans were lost on 9/11.

“We can disagree about the method as long as we’re on the same page about the message. We can discuss the method so long as there’s no antagonism. … But it can’t be about Ray Lewis versus Kaepernick, about Michael Vick versus Kaepernick. It’s not about Kaepernick cutting his hair or … talking softer. Those are not the issues,” he said, referring to criticisms from some former black athletes.

Edwards said the “right protest” grows organically out of the movement, referencing the evolution of Black Lives Matter from a Twitter hashtag to a national slogan and finally into a movement. “Started by three black women, by the way,” he noted.

Edwards said that although it can seem at times that the nation is at a breaking point, he feels optimistic about the future of the country.