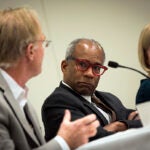 Thurgood Marshall: The soundtrack of their lives

Missions accomplished at a growing startup, 5 students return to Harvard

For Ty Rocca, arriving back on campus for the start of fall term felt a bit like waking up from an unusual dream.

After helping cultivate the startup to a point of business stability, Rocca and Leo Hentschker ’19, a math concentrator, Steven Kekacs ’18, Jake Seaton ’19, and Will Deuschle ’19, computer science concentrators, returned to the John A. Paulson School of Engineering and Applied Sciences this fall, picking up their studies right where they left off.

“The School has been very flexible, so it was a great time to take a risk,” Rocca said. “When we started this adventure, the worst thing that could happen is that we would fail and have to come back to Harvard, which wouldn’t have been such a bad thing at all.”

The possibility of failure weighed heavily on the minds of Rocca and Kekacs in 2015 as they considered leaving School to work for Quorum.

They had met Marks and Wirth through the swim team, and were drawn by the startup’s concept — using data analytics to help public affairs professionals at private companies, trade associations, and nonprofits streamline and strategize lobbying efforts.

Quorum began as an algorithmic web application that could identify the most influential members of Congress on a particular topic, eliminating the costly, timely, and frustrating process of bouncing between many offices searching for the right legislator.

Rocca and Kekacs built new features, such as a Google-like search across Quorum’s expansive database. Rocca, initially an economics concentrator, taught himself to code to help build out the company. The web application soon became a full-blown Congressional relations manager, enabling users to digitally store notes and share information with colleagues.

“We realized pretty quickly that there are a lot of different, simple tasks that interns or legislative staff members spend enormous amounts of time on that we could automate instantly,” Kekacs said.

As the company grew, co-founders flew between Cambridge and Washington, D.C., for meetings while teammates balanced Quorum coding sessions with Harvard coursework. Relocation began to feel inevitable, so in spring of 2015, Kekacs, Rocca, Seaton, and Hentschker decided to take time off, move to Washington, D.C., and work for Quorum full time.

Packed into a rented house on the outskirts of the nation’s capital, the team wasted no time. They worked 18-hour days, pushing out new features with breathtaking speed. They expanded Quorum to all 50 state legislatures, and added collaborative tools like meeting notes, automatic spreadsheet updates, and a data-driven outbox feature to efficiently send personalized emails to policymakers, stakeholders, and advocates.

“We moved very fast,” Rocca said. “A client would say, ‘Hey, have you ever thought of doing this?’ and then by the next morning, we would have added that feature. That first summer was a very move-fast-and-break-things time.”

It was also a period of team expansion; Deuschle joined as a summer intern in 2016 and then accepted a full-time position. And while the growing development team rolled out new features — Hentschker became nocturnal for a few weeks to manually run overnight algorithmic updates — the sales team doubled down, and the firm’s customer base and revenue slowly began to grow.

“We were all doing everything we could to keep the company up and running smoothly,” Hentschker said.

By the end of this summer, Quorum boasted more than 60 distinct data sets and had expanded to Europe. The team was able to move out of the house on the edge of Washington and secure a glitzy office space near Capitol Hill.

Looking around the glittering, glass-walled office, Rocca felt gratified, but he and his peers decided the new office signaled the right time to return to Harvard. Though the adventure wasn’t lucrative — the team poured most of the revenue back into the hungry startup — the experience was invaluable, Rocca said.

“I went from knowing nothing about programming to doing that as my major,” he said. “You learn not only how to code, but see the relevancy of coursework, how important those lessons on coding consistently or following style guides actually become in practice. What’s nice about taking off time is that now I can go back and focus on learning those things better.”

Quorum’s future is bright, Kekacs said, and it is exciting to know they played a role in its growth. While it is fun to be back in class, he admits it hasn’t been easy to readjust to a world of lectures, problem sets, and exams.

“The most jarring thing about being back on campus has been not waking up in the same house with these guys every day,” Seaton said. “It may seem ironic, but one of the things I’m looking forward to most about being back at School is working together.”