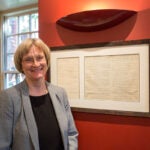 For Faust, the road ahead

Harvard University has announced the appointment of Shaun Donovan as senior strategist and adviser to the president on Allston and campus development.

Donovan, who has decades of experience in urban planning and development, is a 1987 graduate of Harvard College, holds a master’s degree in public administration from the Kennedy School of Government (1995), and a master’s of architecture from Harvard Graduate School of Design (1995).

“Shaun Donovan brings deep experience and knowledge to this role,” said Harvard President Drew Faust. “We are excited and privileged to have him join us in thinking about important new ways to advance our campus planning efforts and our progress in Allston.”

Working closely with Executive Vice President Katie Lapp, Donovan will help Harvard pursue its vision of developing an Allston campus that enhances the University’s leadership in education, research, innovation, and entrepreneurship, while fostering collaboration across Harvard and within the community.

“I‘m grateful to have this chance to help shape the future of a University and a place that have profoundly shaped me as a person and a professional. I’ve long admired Drew Faust’s leadership and look forward to working alongside her, Katie Lapp, and the Harvard, Cambridge, and Boston communities,” said Donovan. “Allston represents a unique opportunity to build a more collaborative and innovative Harvard, and to further deepen the important partnership between the community and the University.”

Donovan, who will work on a part-time basis beginning this week, will provide strategic advice and counsel on institutional, non-institutional, and public realm planning in Allston. He will also help University leaders ensure that Harvard’s emerging campus in Allston complements its Cambridge and Longwood campuses, builds upon strong community ties, and aligns with the priorities of other regional stakeholders.

“Harvard is making incredible progress on its Allston development, and we’re excited to have Shaun join us in thinking about the opportunities that lie ahead for the region,” said Lapp. “We are delighted to welcome him back to the University.”

Donovan served as director of the White House Office of Management and Budget 2014–17, and as secretary of the U.S. Department of Housing and Urban Development (HUD) 2009–14. He also served as chair of President Barack Obama’s Hurricane Sandy Rebuilding Task Force.

From 2004 to 2009, Donovan was commissioner of the New York City Department of Housing Preservation and Development. Prior to that, he served as the deputy assistant secretary for multifamily housing at HUD, and worked at the Community Preservation Corp. in New York City, at the Joint Center for Housing Studies at Harvard, and as an architect.

Donovan’s appointment comes as Harvard continues to make significant progress in implementing an ambitious 10-year institutional master plan for Allston, as well as a $43 million community benefits program for North Allston and North Brighton, both of which were approved with support from the community. (Harvard and the community have worked closely to implement programs around youth, the arts, workforce training, and economic development.)

Construction of the Science and Engineering Complex, a nearly 500,000-square-foot, state-of-the-art facility that will house the John A. Paulson School of Engineering and Applied Sciences, is well underway. Work has also begun on the District Energy Facility (DEF), the centerpiece of a highly efficient utility co-generation microgrid that will provide electricity and water to the Allston campus. The DEF is leading the way in resilient infrastructure, with the building designed to withstand major storms and floods.

Over the past several months, Harvard has also continued to advance other aspects of its Allston development. Last fall the Pagliuca Harvard Life Lab joined the i-lab and Launch Lab on Western Avenue. Work continues on Klarman Hall at the Business School, and in various buildings around Harvard’s athletic facilities. The Continuum in Barry’s Corner is a mixed-use building, which includes residential and commercial space. This fall, Trader Joe’s and Our Father’s Deli are set to open. Additionally, Zone 3, a Harvard-sparked initiative to explore experimental programs, events, and retail along Western Avenue, continues to flourish with activities such as Aeronaut Brewing Neighborhood Nights, the PRX Podcast Garage, and fitness classes. Planning also continues for the Enterprise Research Campus, which will be located across Western Avenue from the Harvard Business School.

The Harvard Ed Portal continues to provide educational opportunities between the University and the community. This past academic year, the Ed Portal hosted more than 200 programs, offered Allston-Brighton residents more than 200 scholarships for Harvard programming, partnered with more than 20 local organizations, and saw thousands of neighbors come through its doors.