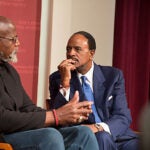 In their activism, a different kind of strength

When the Trump administration announced on Sept. 5 that it intended to upend the Deferred Action on Childhood Arrivals program (DACA), which has banned deportation of many young immigrants, the move seemed to set a general course for what would come next.

But by the time the Harvard Kennedy School’s Institute of Politics (IOP) held a John F. Kennedy Jr. Forum on the issue Friday, the decision had become murkier again, underlining both the significance and the complexity of the issues surrounding immigration, documentation, and legal rights for those young people.

Opening the discussion on “DACA: What’s Next,” moderator Dan Balz, chief correspondent for the Washington Post and a fall resident fellow at the IOP, summarized recent developments, asking the panel members — Carlos Rojas, an immigrant rights advocate and special projects consultant for Youth on Board; Roberto G. Gonzales, professor of education, Harvard Graduate School of Education; and Jason Corral, staff attorney, Harvard Immigration and Refugee Clinical program — for their take on the social media back and forth.

In announcing an end to the current program, President Trump had said he wanted Congress to determine a replacement policy within six months. But last week he tweeted: “Does anybody really want to throw out good, educated and accomplished young people who have jobs, some serving in the military?”

Yet Rojas, who was brought to this country from Colombia at age 4, dismissed the idea that such tweets represented any real reversal. “His tweets are demonstrative of his role — an incredibly destructive, confusing, muddled role,” said Rojas, whose mother fled Colombia with her son because of violence that had claimed her brother. “Our ability to raise families and hold jobs is now in jeopardy.”

The uncertainty, Gonzales said, is exacerbated by the six-month timeline announced by Attorney General Jeff Sessions. The congressional schedule is packed, Gonzales said. “We’ve got the budget. We’ve got the debt ceiling. We’ve got [Trump’s border] wall to contend with,” he said. “The timing is really tough.”

In addition, the panelists said, DACA is only a small part of the larger unresolved issue of immigration. Gonzales said that current laws are outdated and sometimes even unnecessary. “For the last seven years, net migration from Mexico has been negative,” he said. “The border has been healed. But that doesn’t address the politics of this.”

The DACA program itself was a compromise, said Corral, just as the BRIDGE Act, legislation now before Congress that would essentially legalize DACA, is a compromise. Calling the administration’s initial decision to suspend DACA “discriminatory, racist, nationalist,” Corral said, “It’s not the people that are broken, it’s the immigration law that is broken.”

The human cost involved is wide-ranging and often hidden. “Because of exclusion from the formal workforce and financial aid, the vast majority live much more modest lives, achieve much less, and start to encounter barriers early on,” Gonzales said.

Rojas said his own life illustrated the point, describing his early faith in the United States as a meritocracy, a belief that was shattered when, despite early years of study and extracurriculars from cello to theater, he found he was unable even to apply for a scholarship because of his undocumented status.

“That was a really hard lesson to learn,” he said, crediting it with propelling him into activism.

“For many undocumented young people, the stress, the strain, and the stigma they encounter really start to wear them down,” said Gonzales. “It disadvantages young people very early on.”

In that light, he said, even the compromises that have been proposed may end up doing their own damage.

Citing their “innocence and achievements,” Gonzales said, “undocumented young people have become very popular.” But the idea that there are “good” undocumented immigrants who deserve special treatment creates a downside.

Nor are many of the Dreamers willing to accept their exceptional status, said Rojas, especially if it means a compromise that would allow for additional funding for immigration enforcement that could target their family members and friends.

“A lot of the undocumented youth are no longer willing to throw our parents, future immigrants, and people who live on the border under the bus,” said Rojas. “That is not a compromise we’re willing to make.”

The solution, the panelists suggested, must be larger than DACA. “The law is broken,” Corral said. “And when the law no longer serves the national interest, you change it.”