Museum leaders have more than just art on their minds 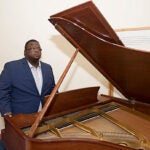 On Monday at the Radcliffe Institute for Advanced Study, the leaders of five Boston-area museums — the Museum of Fine Arts, the Institute of Contemporary Art, the Isabella Stewart Gardner Museum, the MIT List Visual Arts Center, and the Harvard Art Museums — came together to discuss their work, wish lists, and biggest challenges.

The discussion, titled “The Museum, the City, and the University,” touched on various topics, including diversity, the role of museums in civic engagement, and how museum architecture can build community.

At the reimagined Harvard Art Museums, where Italian architect Renzo Piano’s design unites three museums under one glass roof, “a huge amount of work was done to try to have the mission of the museum inform the building,” said Martha Tedeschi, Elizabeth and John Moors Cabot Director, about the goal of having the design enhance teaching and learning.

Inside the building, which has been open for almost three years, “spaces are actually in some cases driving the program and actually giving people more of an appetite than we thought for original works of art,” Tedeschi said.

Jill Medvedow, director of the ICA, had a different view on the question of architecture, turning her focus to the buildings that surround her waterfront museum.

“I think that it’s important to look at the issues of zoning and planning, of the relative power and roles of developers versus civic institutions in actually shaping the face of the city,” said Medvedow, who lamented the lack of open space around the ICA.

Matthew Teitelbaum of the Museum of Fine Arts came to Boston from the Art Gallery of Ontario, where he oversaw a Frank Gehry-designed expansion and renovation. During that project Teitelbaum said he came to see the work as “building an experience” and the resulting architecture as a way to facilitate a “journey” through the art.

He called the MFA’s journey “unrewarding.”

The question of citizenship, a theme at Radcliffe this year and next in the lead-up to the centennial of women’s suffrage and the ratification of the 19th Amendment, was also part of the discussion. Moderator Yukio Lippit, Radcliffe’s Johnson-Kulukundis Family Faculty Director of the Arts and a professor of the history of art and architecture, asked the panelists to elaborate on the role of museums in civic engagement.

Sometimes that engagement happens locally, said Tedeschi. When students in AP world history at nearby Cambridge Rindge & Latin realized their textbook lacked information on Islamic culture, Harvard stepped in to “address that gap through the collections,” she said.

“Sometimes those really specific projects are a great way to foster civic engagement in a very doable way that impacts your immediate community.”

Sometimes the engagement involves nationwide issues. Teitelbaum described an MFA discussion around a curator’s idea to develop an exhibition consisting of kneeling figures in response to recent comments from President Trump and the reaction his comments prompted during Sunday’s National Football League games. The idea highlighted a number of competing challenges, said Teitelbaum, including the need to balance the staff’s urgent desire to act with the artists’ intentions and the MFA’s message “as an institution.”

In a post-discussion Q&A session, audience members asked the directors to weigh in on other pressing concerns, including diversity in collections and audience.

In response to the question “Who are your museums for?” Peggy Fogelman of the Isabella Stewart Gardner said that every institution, while open to all, also needs to identify individual opportunities for engagement and connection.

At the Gardner that connection involves the residents of Roxbury and Mission Hill, “who may have not traditionally felt like the Gardner was a place for them … [They] are communities of tremendous creativity that we would like to collaborate with,” she said.

Paul Ha of the MIT List Visual Arts Center described how staff puzzled over poor attendance at a free weekend program the museum offered for underserved teens. Only later did organizers realize that the teens often worked on weekends to help support their families, and that many couldn’t afford transportation costs.

“There was a disconnect between what we thought was great and the reality of life,” said Ha. “Even though we mean well, we really sometimes have it all wrong.”

One woman, concerned about the narrowness of images she sees in Boston museums, pressed the directors to outline specific changes. “A lot of times my perspectives are not recognized and/or presented within museums, and in some cases they are [but] in ways that are disrespectful.”

Teitelbaum answered that the MFA has a new program that offers free memberships to naturalized Americans in Massachusetts. Its success, he said, will be judged by how many of those who accept the offer become gallery guides or staff members in the next five to seven years.

“I think that until you accept that you have to invite people in to help create meaning … you won’t get that true connection. It’s a big challenge and an exciting one.”