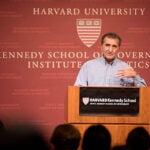 The Obama years, in photos

Like many idealistic Americans, Frenchman Guillaume Liegey, M.P.A. ’10, initially was inspired to embrace politics by “The West Wing,” the television series featuring a president named Jed Bartlet. Liegey even imagined that coming to Harvard might set him on a course to become president of France someday.

“When I arrived at the Kennedy School, I wanted to go into politics. I wanted to spend three years here to learn how to become a great politician and then go back to France and do this,” Liegey said in an interview. He had volunteered for Barack Obama’s presidential campaign in 2008 while a student, knocking on doors and trying to understand better what made that race such a success. “I was wondering how people dared call that the most modern campaign in history,” he joked.

In discussions with Marshall Ganz ’92, M.P.A. ’93, Ph.D. ’00, a senior lecturer in public policy at the Kennedy School, as well as with other similarly inspired fellow students, Liegey came to see that the 2008 success was not just about clever social media appeals or complex data analytics, but also about old-fashioned organizing and motivating people.

“I realized what a good campaign was, which is technology, data, and humans. The fact that you can mobilize many people to have face-to-face conversations, I found that fascinating,” said Liegey.

Last week, Liegey returned to HKS alongside Brune Poirson, M.P.A. ’17, to share their experiences working on Macron’s campaign with Ganz and Arthur Goldhammer, a noted French translator and political writer affiliated with Harvard’s Minda de Gunzburg Center for European Studies, and to offer their assessments of where the new French president and the En Marche movement may go from here.

Poirson had been a student at HKS when she joined Macron’s campaign, and became so involved that she spent her winter break in France.

“Not that long ago, I was sitting here, and then I helped with the campaign, and then I ran [to be] a member of parliament, won in one of the most difficult [departments] in France, and then became a member of the government,” she said of her whirlwind year.

Poirson said that in her final semester she worked with sympathetic professors who knew she needed to spend a lot of time in France campaigning. Poirson’s En Marche-style effort in Vaucluse, an area of southwestern France, was a long shot given the region’s disdain for Macron, a former investment banker and economics minister. But in June, she was appointed secretary of state attached to the minister of state and minister of ecological and solidarity transition.

Liegey’s involvement in French politics had begun several years ago, when, between classes on campaign strategy and political organizing, he met two French colleagues, Arthur Muller and Vincent Pons, an assistant professor at Harvard Business School who studies political economy and development. All had similar ideas about bringing the Obama campaign game plan to France, and they eventually formed a campaign technology firm, Liegey Muller Pons, to do just that.

Few in France understood at that point what had made the Obama campaign successful.

“Everybody was like, ‘Obama: It’s Twitter, Facebook, social network[ing] for campaigning.’ This was only a small part of the campaign. The real part was how do you get 1.5 million volunteers organized to target the right places to get out the vote? And how do you do that? You knock on doors, because that’s what works best to get people to vote,” said Liegey.

But that style of campaigning had fallen out of favor in France, where political persuasion was dominated by leaflets, posters, rallies, ads, and traditional press coverage. “American people, they hug each other, they smile all the time, they are very nice,” Liegey said. “In France, we like privacy, so nobody would open the door. Never! We would open the door just to slam it in people’s faces. That was people’s reactions.”

In addition, cultural differences made it hard to convince the French that an Obama-style campaign would work, and data testing new approaches was seen as too American.

“There was no experimental, empirical approach to campaigning,” said Liegey.

After graduating from Harvard, Liegey, Muller, and Pons spent a year and a half going from France to Boston twice a month to train 1,000 political organizers in Obama-style campaigning. By late 2011, they had managed to convince candidate François Hollande to allow them to build and oversee a team of volunteers who would knock on doors for his 2012 presidential run.

“People talk about Macron now, but Hollande at the time, that was the first time in Europe that a major political party was saying, ‘One of the priorities of my campaign is to mobilize thousands of volunteers to knock on doors and encourage people to vote,’” said Liegey.

In all, they mobilized 80,000 volunteers, three times the typical number, and knocked on 5 million doors, reaching 10 percent of the French electorate. Never before had a well-established candidate taken such an approach. “It was surprisingly quite radical,” Liegey conceded.

With a political newcomer like Macron, Liegey said a key decision early on was to have him conduct a “listening tour” a full year before the traditional campaign period in France began, knocking on doors across the country not to solicit votes, but to hear what citizens — especially those who felt disconnected or disgusted with politics — cared most about. It was an odd time to begin such a deep canvassing operation, Liegey noted. Macron was still serving in Hollande’s cabinet, and had no money, no volunteers lined up, and no party infrastructure on which to rely. He also needed to get the operation up and running in five weeks.

“No established parties in Europe have managed to do that outside a campaign period,” he said.

Poirson and Liegey are still applying the lessons learned at Harvard to politics in France. Both noted that beyond leading the country through continued economic difficulties, Macron must figure out how to create a credible political movement that lives on after the election and how to change a widespread perception that he and En Marche are primarily supportive of the elites.

“Basically, what En Marche means is ‘progress and movement,’” said Poirson. As a political idea, it encouraged broad participation and offered a sense of optimism and energy to those who felt France was ripe for transformation, but weren’t sure if things would really change. “It was so easy to be pessimistic” about where things were going with France and the European Union previously, she said.

The key for Macron now, they say, will be whether he can deliver on some of the pragmatic reforms he promised he’d seek. For En Marche, the challenge will be to maintain that feeling of optimism and better engage citizens by bringing more disaffected voters and newcomers into politics and government. European elections in 2019 will be an important test of the movement’s reach, particularly if it can help elect candidates at the national and local levels.

Ultimately, Macron and the movement will need to answer an essential question.

“How does En Marche become successful in what Obama did not manage to do, which is transforming the enthusiasm of people joining the campaign into something more profound, more lasting after the election?” said Liegey.