The Obama years, in photos 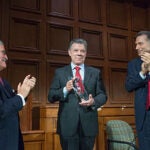 That was Pete Souza’s average picture count during his years as the official White House photographer for President Barack Obama, for a staggering total estimate of 1.95 million.

“I wanted it to be the best archive we’ve ever had of a president,” Souza said of his work documenting Obama’s presidency. At the Harvard Kennedy School’s JFK Jr. Forum on Wednesday, Souza took the audience on a highlights tour of the Obama years, sharing the stories behind a number of iconic photos and a few lesser-known images.

Ann Marie Lipinski NF ’90, curator of the Nieman Foundation for Journalism at Harvard, opened the event, praising Souza’s “distinctive and probing” photography. “I should just stop now,” Souza joked, stepping up to the microphone following Lipinski’s comments. He gave the audience a brief history of the White House photo office, and shared a few images from his first stint on that staff, as the official White House photographer for President Ronald Reagan.

Souza’s images from the Obama years, many of which will appear in his forthcoming book, spanned the breadth of Obama’s presidency, from the serious to the lighthearted. Several photos emphasized Obama’s role as statesman and commander-in-chief, such as from the March 2010 passage of the Affordable Care Act, which Souza dubbed “the best day” of Obama’s presidency. Then there was the deep grief of the 2012 shooting in Newtown, Conn., which Souza called “the worst day.”

Souza also shared a close shot of a marked-up speech in Obama’s hand, and a tense, candid group photo snapped in a small room near the Situation Room during the 2011 raid to capture Osama bin Laden. “The most powerful people in the world couldn’t do a thing but watch,” Souza said of that photograph, which included, among others, then-Secretary of State Hillary Clinton.

Many of Souza’s images highlighted the humanity of Obama’s presidency: a quiet moment on a swing set on the White House lawn with his elder daughter, Malia; dancing with his wife, Michelle, at the Governors’ Ball; stepping in to coach his younger daughter Sasha and her basketball teammates on a Saturday afternoon. “He was coaching them like it was the NBA finals,” Souza said, laughing.

Souza also spoke about the balance between aesthetic and narrative: shots that capture an arresting visual moment versus those that tell a story. Though his work usually leans toward the latter, he included a few aesthetic “wow” shots in his presentation, including one of a fog-swathed Air Force One in Seattle, and a photo of the president’s hand opening onto a rainbow in Jamaica.

Throughout his time as White House photographer, Souza sought to capture the human moments: a little boy named Jacob reaching up to touch the president’s hair; a private exchange with Michelle during a lull in the festivities on Obama’s first inauguration night; and multiple joyous encounters with staffers’ young children. Souza has shared many of his Obama photos on his popular Instagram feed, about which he admitted, “I get a little unruly sometimes.”

Pointing to an image of White House staffers in the Oval Office, Souza noted that the Obama presidency included “a lot of seriousness and a lot of fun.” His photos, and the stories behind them, reflected both.